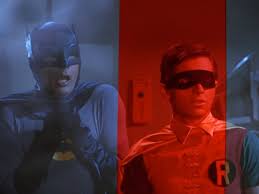 Without BATMAN ’66, it’s unlikely that the villain known as Mister Freeze would have become a celebrated member of Batman’s most prominent rogues. Prior to the TV show, the chilly criminal had only appeared once, in a Bill Finger story, “The Ice Crimes of Mister Zero” (BATMAN #121, 1959). This one-shot evildoer was so named because he’d experienced a lab accident, by virtue of which he could only live in sub-zero temperatures. With that meager motivation, Mister Zero embarked on a career in crime, using both a freeze-ray and a heat-ray to create havoc during holdups. (In the comics, the character mostly ceases to use the heat-ray after his first appearance, and as memory serves his TV-namesake only uses the heat-weapon in his first appearance, adapting Finger’s “Ice Crimes.”) Writer Max Hodge penned “Instant Freeze,” and he may be responsible for creating the new cognomen Mister Freeze. Oddly a DC comic book from 1957, BLACKHAWK #117, cover-features a supervillain with that name. However, I don’t know how likely it is that a writer for the Bat-show would have been perusing any comic books that didn’t have Batman in them.

The Finger story contributes some basic motifs to “Instant Freeze.” In addition to his specialized weapons, Mister Zero’s refrigerated hideout also sports what the TV show calls “hot paths,” zones of normal temperature where ordinary humans can escape the hideout’s freezing cold. This concept, barely exploited in the original story, gets considerable expansion by Hodge. The TV scribe also invents the idea that Batman is indirectly responsible for making Freeze (George Sanders) into a frosty freak, which gives the narrative much more emotional resonance. Hodge also throws in an amusing scene in which the crafty criminal seeks to confuse the crimefighters by unleashing doppelgangers of both himself and Batman on Gotham City, thus resulting in a confusing fight-scene between the heroes and the poseurs.

The short original story also includes a scene in which Zero and his henchmen pull off a robbery using an ice-truck that ostensibly delivers frozen meat, and Hodge works this incident in as well. However, Hodge expands the character of Zero’s robbery victim, making her into an American woman made royalty by marriage a la Grace Kelly, and one of her concerns, participation in a Gotham baseball game, serves as a bridge to Mister Freeze's primary plot. Throughout the episode Freeze steals priceless diamonds, allegedly to pay for his expensive criminal lifestyle, with Batman and Robin connecting the gems with the underworld slang for them: “ice.” But Freeze is most concerned with a player on the baseball diamond, and though he also sports the jewel-like name of Diamante, his name is less important than the character's calculated resemblance to classic ballplayer Joe Dimaggio. Despite his robberies, Freeze’s main plot is to kill Batman and Robin after toying with them for a while. He almost kills them prematurely with his freeze-weapon. Yet the Duo are for once saved by forces outside themselves, this time through the offices of the police department and the local hospital (staffed by a doctor named “Vince,” with a strong resemblance to Vince Edwards, the star of medical show “Ben Casey”).

Once the heroes are back in action, Freeze returns to his original plot, kidnapping Diamante and forcing Batman to surrender himself in exchange. Though Freeze doesn’t seem all that interested in the Boy Wonder, Robin manages to infiltrate the villain’s sanctum, at which point both are, for a time at least, immobilized by the frigid fiend’s mastery of subzero temperatures. Freeze displays more calculated sadism than many Bat-villains, allowing the heroes to dine with him (on baked Alaska, naturally) before exposing them to more temperature-tortures. Despite the presence of campy moments here and there, one decidedly non-campy scene begins with Freeze imprisoning the Duo in a hot path too narrow for both of them, at which point each of the heroes seeks to sacrifice himself for the other. This moment is slightly nullified by the revelation that Batman has taken a special potion to immunize himself to the freezing cold, so that some of his sufferings have been faked for Freeze’s benefit. Nevertheless, though Freeze is sidelined by his vulnerability, the heroes get a good workout with his henchmen.

I’ve yet to encounter a fan-writer who didn’t think that George Sanders’ heavily Teutonic rendering provided the best version of the character. That said, Sanders probably couldn’t have done much with the two later scripts, both of which return Freeze to the status he held as “Mister Zero”—that of a minor gimmick-villain. The reboot of the character for BATMAN THE ANIMATED ADVENTURES has for the most part become the go-to version of the cold-hearted crook.

Posted by Gene Phillips at 12:08 PM
Email ThisBlogThis!Share to TwitterShare to FacebookShare to Pinterest
Labels: combative adventures, the marvelous