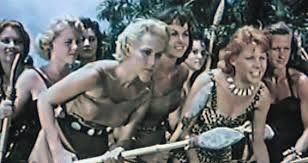 Though WONGO is not one of the better “Amazon fantasies” of the fifties, it does present a challenge in terms of phenomenal classification.
For one thing, though all of the action takes place on what look like Pacific islands, the narrator tells us that it’s all taking place 10,000 years before the current era. This unseen narrator self-identifies as Mother Nature, and she tells the viewer that she and Father Time have been doing a good job shepherding the human race for eons—except, perhaps, for one odd experiment on the islands of Wongo and Goona. (Note: as far back as the thirties, the exploitation film industry used the term “goona-goonas” for flicks which were set in exotic climes and promised sexual thrills.) After this introductory narration, neither of these deity-like presences figure into the main action of WONGO. Often, when I’ve encountered films that start off with some supernatural entity or setting that appears only in a preface, I tend to regard them as “fallacious figments” that don’t really affect the work’s phenomenality. However, since the sexual arrangements of the two islands can’t be explained by any naturalistic process, I have to regard the influence of these supernatural influences as real, so that the film becomes marvelous, even though most of the main action is uncanny at best.

The aforesaid exual arrangements read like something screenwriter Cedric Rutherford might;ve cooked up after reading an Edgar Rice Burroughs novel like THE RETURN OFTARZAN. In that novel, Burroughs describes the city of Opar as a place where all the women are gorgeous and all the men are subhuman brutes. Wongo is much like Opar, and Rutherford extends Burroughs’ idea to the isle of Goona, where the men are all beauties and the women are all beasts.

The script isn’t consistent about whether the two islands know of one another. When Engor, Prince of Goona, shows up on Wongo in his canoe, the Wongo men and women act like they’ve never seen his like before-- and yet they recognize that the feathered staff carried by Engor signifies pe.ceful intent. While the women of Wongo—uniformly young cute things, with no sign of any older generation—goggle over Engor’s good looks, the men listen to Engor’s story: that “ape men” from another island have caused great havoc in the vicinity. Having delivered his warning, Engor prepares to depart. But the Wongo men, even without knowing how their women feel about Engor, decide to kill Engor. One of the maidens, Omoo (apparently named for an obscure Melville novel), saves Engor, and he flees back to Goona. In retaliation, the Wongo men banish all of the women from their village. The women pick up their spears and leave their ugly men to figure out how they’ll propagate all by themselves.

Frankly, I can’t remember if the Wild Women stay on Wongo or boat over to Goona, looking for other hotties like Engor. There are a couple of Amazonian action-scenes, such as Omoo succesffuly outwrestling an alligator underwater. In addition, the Wild Women also encounter two “ape men”—who just look like more ugly guys—and use their spears to force the duo (scouts maybe?) into the jaws of an alligator. After that, the alleged invasion of the ape men never takes place. One wonders how these girls got so tough sitting around the village, but maybe the possibility of making out with hot guys gives each of them the strength of ten.

Meanwhile on Goona, Engor and his fellow studs are turned out into the wilds as a test of manhood. As on Wongo, all the “beastly women” are of the same marriageable age, and apparently the guys are all anxious to get away, once they’ve heard Engor’s stories of beautiful Wongo women.

Somehow, I think everyone ends up on Goona, because the men of Wongo go looking for their women, and instead they find, and become enchanted with the ugly Goona women. But the movie’s real centerpiece takes place when the women of Wongo decide to hunt and trap the hunky Goona men. No actual fighting takes place either the girls trap the guys in nets, or they all just jump on one guy to overwhelm him (I saw one wild girl pinion a guy’s arm once). The filmmakers were almost surely going for the same sort of sexual-reversal theme that appeared in 1950’s PREHISTORIC WOMEN.  However, though the 1950 film is just as silly as this one, it did have a reasonably coherent formula-story. Here the climax, if one can call it that, consists of the Wild Women marching their conquests to the local temple to be married, while the Wongo men decide that they want to cleave to their fellow ugg-os. The temple priestess marries everyone, and that’s that.

Neither the writer nor the director garnered further IMDB credits, and most of the players were in the same boat, except for muscleman Ed Fury, who later starred in some peplum pictures. (One woman has a name similar to that of Adrienne Barbeau, but the two actresses are not the same.) Other metaphenomenal curiosities include a talking parrot, a crocodile worshipped as a god, and a stone temple where one big stone functions as a door, turning on a pivot to admit people. WILD WOMEN is such a cheap production that I can’t imagine their building this relatively expensive-looking set, and so I would conjecture that it’s some local attraction the makers came across while filming down in Florida. Despite those scenes of Amazonian action, the film shakes out as subcombative.

Posted by Gene Phillips at 3:02 PM
Email ThisBlogThis!Share to TwitterShare to FacebookShare to Pinterest
Labels: the marvelous