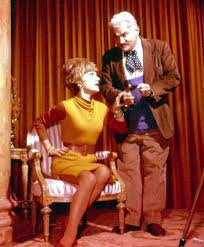 
Zelda is a curious concoction, given that she’s based on a Batman-villain whom even the most fervent Bat-fans really didn’t care about. I suspect that writer Lorenzo Semple or one of the producers wanted to find a role for actress Anne Baxter—who would later play another villain in the show’s third season— but that they wanted a role that didn’t require a lot of makeup or costuming.

Aside from a gender-switch, Zelda is a fairly faithful adaptation of a minor Bat-foe from the John Broome story “Batman’s Inescapable Doom-Trap” (DETECTIVE COMICS #276). Zelda’s male analogue is Carnado, a prominent stage performer and escape artist. However, Carnado possesses no ability to devise his own escape-stunts, and he depends entirely on an engineer, Eivol Ekdal, to make them. But Ekdal puts a high price on his phony death-traps, requiring $100,000 apiece. Given that Carnado isn’t rich, for years he’s been committing robberies to pay for Ekdal’s designs, though Carnado is scrupulous enough that he never steals more than the amount he needs.

This time, Ekdal—who conveniently has a shop in Gotham City—unveils his newest invention: a death-trap from which even he, the creator, cannot devise an escape. Carnado understandably replies that this will do him little good in his performances. Ekdal then proclaims that the two of them will lure the World’s Greatest Escape Artist—a certain Gotham crimefighter—into the trap, in order to watch how he escapes it—and then have Batman assassinated to protect themselves. Carnado, not willing to quit show biz, agrees to the scheme. Without dwelling on details, Batman successfully escapes both the trap and the assassination, after which Carnado and Ekdal are captured.

Once again, a Bat-show writer—Lorenzo Semple again-- is obliged to expand on a simply plotted original story. For the first scenes of the first part, Zelda’s relationship with her engineer-ally Ekdal follows Broome’s story closely, though Batman deduces early on that the $100,000 thief is a woman, thanks to her leaving behind traces of perfume. But since he can’t locate the thief, Batman resorts to a ruse to flush her out, circulating the false info that the stolen money was counterfeit. Ekdal and Zelda both believe the ruse, and Ekdal requires Zelda to make another heist. Batman and Robin seek to lay a trap at a jewelry-store, where a fabulous emerald is on display. But though Zelda doesn’t see through the counterfeit-ruse, her woman’s intuition warns her of a setup. Though she makes a sort of illusory appearance at the store, Zelda chooses a different source of revenue: kidnapping Harriet Cooper, aunt to the ward of wealthy Bruce Wayne.
The episode’s first part ends with Aunt Harriet wearing a straight jacket and being dangled above a fire-pit, while Zelda sits to one side, indifferent to the old woman’s distress.

In the second part, Robin and Bruce Wayne rush to televise a plea to the kidnapper, revealing the duplicity of the counterfeit-hoax. Zelda, advised that she no longer needs the ransom, shows her softer side by releasing Aunt Harriet sans ransom. Ekdal accepts Zelda’s ill-gotten gains as payment for the doom-trap, but before the two crooks can lure the crimefighters to their lair, the heroes find their way to Ekdal’s hideout by other means, partly due to Zelda’s careless appearance at the jewelry store. Two gangsters lie in wait, ready to gun down the Duo when and if they break out of the trap. However, even when the heroes burst free, Zelda has a last-minute change of heart, and warns Batman and Robin. They survive, the crooks don’t (two more of the rare real deaths on the show), and Ekdal and Zelda go to jail. In a coda, Bruce Wayne visits Zelda in prison, and promises that when she’s released he’ll help her get a job as a children’s entertainer. Her enthusiastic agreement comprises the episode’s campiest moment.

Zelda’s actions and character traits are wildly inconsistent, but these lapses aren’t what makes her the BATMAN show’s first bad villain. Despite her supposed gifts of illusionism, Zelda is a singularly unimaginative creation, even allowing that the original template was not much better. In an early scene Robin wonders if the unidentified female fiend might be Catwoman, apparently just because villainesses were a rarity in the Bat-cosmos. Zelda is so bland that she’s not only leagues beneath Catwoman, she’s not even on the same level with Baxter’s later creation Olga of the Cossacks. Jack Kruschen plays the “mad Albanian” Ekdal with a bit more flair, and the episode might’ve been better had he been the main heavy—but probably not by much.

Posted by Gene Phillips at 12:39 PM
Email ThisBlogThis!Share to TwitterShare to FacebookShare to Pinterest
Labels: combative adventures, the marvelous