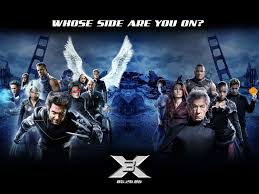 For many fans, X3 is the one where 20th-Century Fox’s X-Men franchise took its first seriously wrong turn, and lost most of the mojo that had been established with the first two films. But upon re-watching X2 recently, I get the sense that everything wrong with Bret Ratner’s take on the mixed-up mutants rose organically out of what Bryan Singer had wrought.

As I noted in my review of X2, one of the biggest problems with the X-Men movies was that it proved difficult for expensive movies, produced over the course of two or more years, to follow the example charted by the Marvel comic book. The comic, coming out once a month, could take full advantage of using what might be termed a “shifting ensemble.” To misquote Dorothy Gale, characters could “come and go quickly” in a monthly comic. Yet at the same time, there was much more narrative space to deal with the reasons for their coming and going, or even for their switching from heroes to villains (or vice versa). Television episodes are able to deal with similar developments, but as yet no one has managed to handle shifting ensembles within the venue of expensive feature films.

Consider, for instance, Singer’s handling of Marvel’s character “Rogue.” Singer and his writers opted to excise her complicated history, which was pretty much inevitable. In place of her being a sassy Southern brawler, she became more empathetic but lost any power to speak of. Rogue worked well to add a layer of sensitivity in the first X-movie, which in turn helped sell non-fans to the character of Wolverine. However, in both X2 and X3 Rogue really has nothing to contribute except for some soppy romance with the Iceman character. In essence, Singer used the character for a particular effect in one movie, and then didn’t have any way of integrating her within the serial concept.

In terms of plot, Singer also foreshadowed one of the concerns of X3. By having Jean Grey perish at the end of X2, X3 was constrained to follow up that thread. Wikipedia acknowledges that Singer, before departing the X-franchise to chase flying Kryptonians, roughed out a plot centering upon Jean’s rebirth, one that would have partly involved the character of the White Queen. Possibly, had Ratner and new writers Simon Wincberg and Zak Penn chosen to focus on this idea, X3 would have been more salutary.

Unfortunately one other concept went into the script-mill. Joss Whedon was considered as a director for the third film, and a continuity he wrote for Marvel, “the Cure,” was duly optioned by Fox as a possible script-source. It would seem that, rather than dispensing with the Cure plotline, Wincberg and Penn chose to make that the “A plot” for X3, thus demoting the resurrection of Jean Grey to a “B” plotline. Even admitting that the writers try mightily to make the two concepts meld, the parts are never more than parts, failing to cohere into a greater whole.

The philosophical question posed by the Cure plotline is fairly rudimentary: on the level of “if you knew you could live your life again without Problem X, would you do it?” Purely in terms of the movie franchise, one might see as a rough development from the quotable quote of X2: “Have you ever considered not being a mutant?” In both Whedon’s comics-script and the completed X3, a scientist invents an across-the-board cure for the state of mutant-hood. Such a cure is tempting to those mutants who are inconvenienced by their abilities, such as Rogue, who can’t even touch her boyfriend without draining his energy and imperiling his life.

In X3, the threat to the existence of the mutant species incenses Magneto, prophet of “homo superior” separatism, and he leads his Brotherhood of Evil Mutants in a quest to capture the source of the Cure—which, to further complicated things, is a mutant with the ability to neutralize powers. The Magneto-plotline was also all but inevitable considering that the Brotherhood had played such major roles in the first two films, even if one member, Mystique, was sidelined, while new members Callisto and Juggernaut joined the gang. Still, the use of Magneto as a dimestore Mephistopheles, tempting the reborn Jean Grey to use her powers for selfish ends, comes off as nothing more than a failed attempt to integrate the two plot-threads. In the end, the battle of heroes and villains over access to the Cure is just another Hitchcockian whatsis, and the audience has no real reason to care about what the Cure means, or human-mutant relations, or much of anything.

To cite yet another inevitability, it was a given that the extremely involved underpinnings of Marvel’s “Phoenix Saga” could never have been reproduced for a stand-alone film. I give credit to the writers for trying to foreground Jean’s rebirth in the nature of her mutant powers. The very reason she can come back from her death in X2 stems from the fact that her tremendous psychic abilities arise from the subconscious mind (a shout-out to FORBIDDEN PLANET, perhaps?) Yet the scenes in which the X-Men seek to grapple with their comrade’s return from death are uninspired in the extreme. Apparently James Marsden was not available for the full shoot, as Singer had co-opted his services for SUPERMAN RETURNS, and so Wincberg and Penn were obliged to simply kill him off, which event gets even less resonant treatment than the matter of Jean’s resurrection. Because the Jackman version of Wolverine was in love with Jean, he has to do the heavy lifting in the Jean Grey B-plot, and the others are just not really that involved.

Storm gets more substantial usage here than in the previous two films, and Iceman is better used than he was in X2, but on the whole “characters come and go” with nearly no setup as to why the audience should care about them. Versions of Colossus, the Beast, Shadowcat and the Angel all appear on stage and execute their parts, as if to please hardcore fans panting for their inclusion. But precisely because the characters appear so mechanically, Fox sacrificed any chance to make them viable parts of the franchise. There are certainly some nice character-moments here and there, particularly those between Jean and her mentor Professor X, and some of the battle-scenes are good fun, if not especially compelling. But again—a lot of nice individual parts don’t make a good movie.


The best thing one can say about X3 is probably that, even if it marked the start of the downward spiral, it’s nowhere near the spiral’s bottom.

Posted by Gene Phillips at 2:28 PM
Email ThisBlogThis!Share to TwitterShare to FacebookShare to Pinterest
Labels: combative adventures, the marvelous