THE LEAGUE OF EXTRAORDINARY GENTLEMEN (2003) 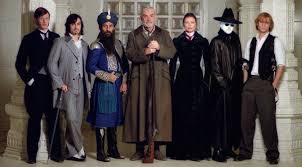 
Reportedly neither Alan Moore nor Kevin O’Neill cared for this big-budget rendition of their same-name graphic novel franchise. There are probably any number of points on which the film could be justly criticized. One unjustifiable complaint, though, would be that the adaptation did not follow the original. After all, all of the characters that Moore and O’Neill pastiched for their concept—Allan Quatermain, Mina (DRACULA) Murray, Jekyll-and-Hyde, Captain Nemo, and the Invisible Man—were substantially revised from their original models.

When I first saw this film—directed by Steven Norrington from a script by comic-book scribe James Rohinson-- I didn’t really mind the very different takes on Mina Murray (Peta Wilson) and the Invisible Man (Tony Curran), one transformed into a full-fledged vampire queen and the other into a petty thief who simply acquired the invisibility formula from the original inventor. The film’s versions of Quatermain (Sean Connery), Jekyll-Hyde (Jason Flemyng) and Nemo (Nseeruddin Shah) remained largely faithful to the comics-incarnations, at least in terms of what their physical abilities. However, I couldn’t stand the re-imagining of Oscar Wilde’s Dorian Gray (Stuart Townsend) as an invulnerable immortal (because his magic portrait now protects from physical harm as well as aging), nor Twain’s Tom Sawyer (Shane West) as a turn-of-the-century American G-man. On my re-viewing, the Sawyer character remained just as annoying, but the Gray character gained merit, thanks to Townsend’s excellent execution of that rare hero-type, “the Tough Fop.”

The basic situation remains the same as in the graphic novel: it’s 1899, and the British government assembles a task force of “extraordinary gentlemen” to take down threats to the Empire. In contrast to the first graphic novel, the threat is a masked mastermind known as “the Fantom”—a spelling that may allude less to the Phantom of the Opera and more to the lesser-known French supercriminal Fantomas. The Fantom and his servants are plotting to sow disunity amid the European countries and so foment a World War. However, the Fantom’s mask conceals of the most famous supervillains, and one whose name was invoked in the Moore-O’Neill series—though the film’s script doesn’t get much mileage out of that particular bit of pop mythology.

To be sure, Moore and O’Neill’s creation is the better pastiche of pop-culture characters, though this is partly because the comics-medium is better suited to exploiting a multitude of multi-layered references to both fiction and history. A two-hour movie, particularly one aimed at action-junkies, could not, with the best will in the world, have captured the density of the original franchise. That said, whereas in the comics the group is genuinely assembled to serve as England’s proto-superhero squad, in this LEAGUE there’s a secret agenda behind the team’s formation. That agenda isn’t strikingly original, but it does add some needed drama to the plot.

The exigencies of the main plot don’t allow for much character interaction on the part of the principals, with the exception of Gray and Murray, who enjoyed some torrid past together. Aged Quatermain functions as the “Professor X” of the super-group, but he doesn’t play well with the other members (Connery said he took the role without really understanding the script). There’s a forced attempt to forge a surrogate father-son relationship between Quatermain and Sawyer, and Skinner the Invisible Crook gets on everyone’s nerves, but LEAGUE will never be on the top of any lists for “quarreling superhero team movies.”

In the final analysis, the movie delivers on its main point of appeal: expensive feature-film action. The team’s assignment is nothing but a device to get the ball rolling, just like similar plot-contrivances in most James Bond flicks, and Norrington does pull together a lot of well-staged fight-scenes without seeming to repeat himself—which is a skill a lot of MCU movies could stand to learn. Connery, who retired after acrimonious experiences on the LEAGUE set, nevertheless acquits himself well in the splashy battle-scenes, and Jason Flemyng, the “muscle” of the group, projects the powerful aspect of Hyde so well that the rubber mecha-suit he wears in the role comes off better than it would’ve with a lesser actor.

There’s a very mild anti-imperial theme in the movie, but LEAGUE precedes the hyper-politicization of the superhero film—which might be its single best feature.
Posted by Gene Phillips at 2:53 PM
Email ThisBlogThis!Share to TwitterShare to FacebookShare to Pinterest
Labels: combative adventures, the marvelous