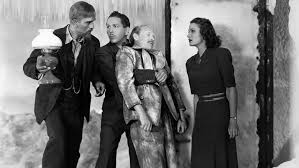 MAN WITH NINE LIVES is close to being a reprise of Boris Karloff’s previous “mad scientist” film for Columbia, THE MAN THEY COULD NOT HANG. This was a pleasing if unremarkable story of Henryk Saavard, a dedicated doctor who perfected a way to bring patients back from death. The state thinks that he’s killed a patient and so they hang him. A confederate steals Saavard’s body and brins him back to life, after which he traps the judge and jury wwho unfairly slew him, and kills several of them before he’s stopped. In my review of HANG I thought it the best of the Columbia “mad doctor cycle.” I’ve changed my mind, for though writer Karl Brown re-uses many of the tropes of his earlier script, the arrangement is much more than just another vengeful killer film.
NINE begins with a mystery: Leon Kravaal, a doctor who claimed to have perfected the science we now call cryonics, disappeared ten years ago, along with four men who had accused him of freezing a patient to death (analogues of Saavard and his condemning jury). Tim Mason, a doctor who admires the missing doctor’s theories, takes his nurse-fiancee Judith to Kravaal’s abaonded home, and the two of them find what the police of ten years ago could not: a secret passage leading to a cryogenic chamber. Tim and Judith soon discover five men—Kravaal and his accusers—and, upon thawing them out, find that they’re all alive.

Director Nick Grinde approaches the material in the same adequate manner he did for the previous film, but this time Brown makes his tragic doctor more appealing. Upon being revived, Kravaal theorizes that he accidentally exposed all of them to a unique combination of chemicals, allowing them to survive the deep freeze. The other four men, all of whom were willing to condemn Kravaal out of hand, find that they’ve lost ten years of their lives, and that they’re all legally dead. One of them destroys Kravaal’s notes, and in retaliation the maddened scientist decides to use his unwelcome guests as guinea pigs.

The romantic couple proves a bit of a drag, though Mason’s conflicted feelings about Kravaal’s accomplishments keep him from being just another bland leading man. Of the support-cast, Byron Foulger excels in playing his go-to character type, the insufferable martinet. But the show is Karloff’s all the way, though Brown’s script gives the actor a better sampling of good lines than Karloff usually got from his B-films.


Posted by Gene Phillips at 1:40 PM
Email ThisBlogThis!Share to TwitterShare to FacebookShare to Pinterest
Labels: the marvelous