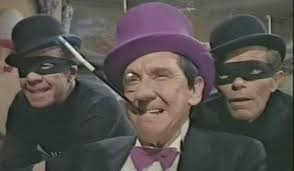 Lorenzo Semple followed his debut episode with “Fine Feathered Finks,” adapting an original tale by comics-writer Ed Herron, “Partners in Plunder” (BATMAN #169, 1965). “Finks”—which is the punny name by which the episode’s villain addresses his bird-named henchmen-- is not nearly as inventive as “Hi Diddle Riddle.” Both the original story and the TV-adaptation have just one bolt in their respective quivers: the idea that the felonious Penguin decides to use Batman’s own knowledge of the villain’s modus operandi to the Penguin’s benefit. In effect, instead of setting a thief to catch a thief, Penguin sets a cop to scheme for a thief.

Like the Riddler, the Penguin hadn’t seen on a regular basis in Bat-comics in the years before “Plunder” appeared, so the comics-tale was something of a revival of the villain’s fortunes. “Finks,” though, did more for the villain’s career than any single story did, given that Burgess Meredith’s incarnation of the character made him an indelible presence in the Bat-mythos, even as Frank Gorshin did with the Riddler and Julie Newmar would do with the Catwoman. In the comics the Penguin could be played as sinister or as comical by turns, but Meredith brings the two together, capturing the odd-looking criminal’s sense of strutting self-importance.

The original and the adaptation differ only in details. As in the comic, the episode starts with the Penguin’s thugs distributing umbrellas that shoot off startling but harmless fireworks-effects. Batman and Robin, puzzled that these displays were not used for the commission of crimes, ferret out the Birdman Bandit, who’s now opened an umbrella-making factory. As in the comics-story, Penguin denies knowing anything about the freaky umbrellas, and the heroes let him off, since a charge of malicious mischief wouldn’t have made for a very exciting tale. Penguin then gives the heroes a really big clue, dropping a huge umbrella in the city streets, with a smaller umbrella attached. The crusaders examine the small umbrella in detail, little suspecting that there’s a hidden microphone in the handle (an oversight that works a little better in Herron’s version). Penguin, listening in on the conversation of the crimefighters, hears them construct his next crime, based on their past knowledge of his methods. Once they’ve planned his plot for him, Penguin then arranges for counter-measures against their defenses.


Before the Big Caper is launched, though, Semple’s Batman takes an additional measure, attempting to bug Penguin’s umbrella shop. Rather rashly, Batman goes on this errand without assuming any disguise, despite the fact that Bruce Wayne is an avowed celebrity. Penguin, upon capturing and subduing the intruder, doesn’t precisely recognize Wayne, though he thinks the face seems familiar. Semple writes an absurd line in which Penguin imagines that the attempted bugger must be working for an umbrella-making rival. Wouldn’t it be more likely that the spy was a police plant? But then, had the villain’s thoughts gone in that direction, he probably would not consigned the spy to a fiery death, the first of the show’s many cliffhanger death-traps. Said trap may have been derived from the comics-tale “The Joker’s Utility-Belt,” which also includes a conveyor belt leading to a fiery furnace. This story might’ve been on the head writer’s mind since it was going to be the show’s very next adaptation, in “The Joker is Wild.”

In the comics-story, the Penguin successfully steals an artifact from a museum, but the heroes get it back and capture him. In “Finks,” the artifact is mentioned, but the crusaders conceive the idea that Penguin’s real ploy is to abduct a high-dollar film actress. This proved a superior choice on Semple’s part, since this idea gave him the chance to take shots at Hollywood narcissism and money-hunger. Indeed, Semple works in more bird-names than Herron’s story, since Miss Robbins’s bosses include functionaries with names like Jay and Eagle. (I’m rather surprised the writer didn’t give the actress some avian appellation that didn’t duplicate that of the Boy Wonder, though.) Batman and Robin fail to prevent the actress’s abduction, and Penguin successfully gets a big ransom. However, by that time, Batman has figured out that the Penguin’s been bugging his exchanges with Robin. So they spring a trap, and after another big fight-scene, the Baleful Bird and his feathered finks end up caged.

Like “Hi Diddle Riddle,” “Finks” is rather light on campy touches. The best one appears at the show’s conclusion, where Bruce Wayne meets Dawn Robbins at a party. Another character informs Wayne that the actress has fallen hopelessly in love with her caped savior Batman, despite having met him only once—when he actually failed to save her from abduction. The episode ends without mentioning that the only thing the heroes saved was the film studio’s money, since Semple seems to be going for a mood in which Robbins’s amour fou is at once pathetic and humorous.

Posted by Gene Phillips at 11:42 AM
Email ThisBlogThis!Share to TwitterShare to FacebookShare to Pinterest
Labels: combative adventures, the marvelous