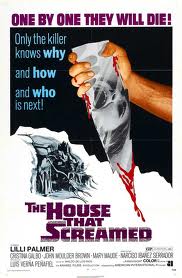 
Here we have two of the many ancestors of the "stalker-slasher" films of the late 1970s, both of which include fearsome older women.

HOUSE THAT SCREAMED, filmed in Spain by director Narciso Serrador, was the first horror-film for Lilli Palmer, marking her as a comparatively late entry among the ranks of "mature" Hollywood actresses obliged to take horrific roles.  Palmer plays Senora Fourneau, who maintains absolute discipline over a posh-looking school for "troubled" girls, i.e., girls who have embarassed their wealthy families in some way or other.  However, despite the harsh discipline-- or perhaps because of it-- the girls constantly find ways to indulge in various vices, including (very light) lesbian encounters and flagellation.  One scene suggests that even Fourneau isn't entirely resistant to all that young nubile flesh, and that she may take out her buried passions in punishing her charges.

Fourneau has one teenaged son, Luis, who stays on the estate.  Luis contrives to meet one of the girls, but the headmistress guards him zealously, repeatedly telling him that he must wait until he finds a woman just like his mother.  Fourneau doesn't quite verge into actual incest-territory here, but suffice to say that she comes within spitting-distance.

A few rather desultory murders take place on the schoolgrounds, but Fourneau doesn't witness them and believes that the girls have run off.  Despite some of the sensual moments of sex and violence, Serrador's plot develops slowly.  The identity of the killer and his motivation will come as no great surprise.

DELILAH is Southern Gothic crossed with a proto-slasher, and stars Agnes Moorhead in her last theatrrical film.  As Delilah, the wheelchair-bound matriarch of a mossy old manse, she shows contempt for most of her hanger-on relatives.  She decides to torment them by telling them of a fabulous buried treasure on the estate grounds, little realizing that one or more of the family wants not just gold, but blood.

Though DELILAH is creaky and talky, it has one aspect that distinguishes it from the majority of films starring female protagonists.  The viewpoint character is middle-aged Luddy Dublin, a heavyset, homely woman who's first seen in a flashback to her youth, when she killed her tyrannical mother with an axe.  Released from a sanitarium, she chances on to a job-opportunity at Delilah's mansion.  Naturally, when the murders begin, an axe is the prominent weapon used.  However, it's unlikely that anyone in the audience couldn't foresee that Luddy was too obvious a suspect to prove guilty.

There are some decent if unexceptional performances by Moorehead, Will Geer, and Patricia Carmichael as Luddy.  Farris' script, in keeping with most Southern Gothics, puts strong emphasis on the role of women in Southern culture, but doesn't manage to say anything pertinent about the matter.  Most of the axe-murders are unremarkable, but there's one memorable murder where a woman is decapitated by a horse-rider.
Posted by Gene Phillips at 3:47 PM
Email ThisBlogThis!Share to TwitterShare to FacebookShare to Pinterest
Labels: perilous psychos (u), the uncanny