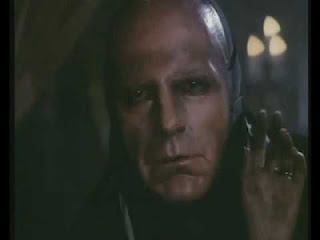 
In this series of POTO reviews I've been exploring the ways in which the films adhere to or deviate from the original novel.  Hopefully it's clear from my review of the 1943 PHANTOM that I'm not judging the quality of these films in terms of their fidelity to the novel.  On occasion, certain deviations from the source material can be as interesting, or more so, than the original.

That said, the 1983 PHANTOM telefilm, directed by Robert Markowitz from a Sherman Yellen script, shows so little resemblance to the source material that it might have been marginally more palatable had it dispensed with all references to the PHANTOM cosmos.

One of the most common tropes in fiction is the "false recognition through resemblance."  In horror stories, this often involves a madman (or, very occasionally, a madwoman) who stalks some victim because of a real or fancied resemblance to a lost love or relative.  Leroux doesn't use this trope as such, though one could argue that in the book's early chapters he wants the reading-audience to associate the corpselike Phantom with Christine's late father, even though Christine herself never imagines a resemblance.  In contrast, the Markowitz telefilm centers its narrative upon the notion of mistaken identity.

I don't relish spending much time on this adaptation, which I found clumsy and charmless.  This Phantom samples elements from both the Claude Rains and Herbert Lom versions, with very little influence from the novel.  In fact, the three major characters are all re-named, with Christine becoming "Maria" (Jane Seymour), Raoul becoming "Michael" (Michael York), and Eric becoming "Sandor Korvin" (Maximillian Schell).

One modest originality in the 1983 film is that, where the Rains and Lom versions deal with evil publishers who oppress (or seem to oppress) soulful musical composers, this film begins with a soulful conductor (Korvin) and his opera-singer wife Elena (also Jane Seymour) victimized by evil critics.  Elena performs the lead in a production of FAUST conducted by her husband, but she's hectored by catcalls during the performance.  A hostile critical review depresses Elena so much that she drowns herself.  Vengeful Korvin seeks out the critic and forces him from him the truth: because Elena had resisted the amorous advances of local roue Baron Hunyadi, the Baron coerced the critic to do a hatchet-job on Elena.  This opening-sequence juggles various elements from both the 1943 and 1962 versions. Korvin gets into a fight with the critic, starting a fire in his office and knocking over some acid.  Korvin kills the critic, but the acid burns Korvin's face.  He almost dies in the fire, but he's rescued by the local ratcatcher (one of the few elements that originates in the Leroux book). The ratcatcher takes Korvin to the catacombs under the Budapest Opera House and for some vague reason becomes the Phantom's servant, showing that in essence he's another incarnation of the Hammer film's mute henchman.

Ah, yes, this whole thing takes place in Budapest, Hungary, not Paris, France. This isn't a horrible change, but Markowitz doesn't do anything interesting with the new location, so it might as well have been transported to London or New York for all the difference the locale makes.

However, the script's changes to the characterizations of Christine and Raoul (aka "Maria" and "Michael") are much more damaging.  Michael, like the Hunter character from the 1962 film, is the manager of the opera-house where the Phantom decides to hang his cloak, and he, like the Phantom, takes a shine to a young ingenue, name of Maria.  Admittedly Christine and Raoul aren't deep characters, but their basic sympathetic natures make them work well in most versions of the story.  Michael and Maria are both superficial, irritating characters who lack any soulful nature, and whose fates are barely interesting, much less sympathetic.

As soon as Maria starts singing at the opera-house-- with the usual opposition from the entrenched diva-figure-- the Phantom spots her resemblance to Elena and takes a personal interest in her musical development.  Arguably this lookalike-development weakens the strength of the spiritual bond between the Phantom and his pupil, a bond implicitly through the musical genius they share.  In any case, the Phantom covers his scars with what looks like a death-mask of Maximillian Schell's face and directly approaches Maria with an offer of tutelage (no speaking-through-the-walls here).  Maria accepts. At this point Korvin is  aware that Maria is not Elena.

It's unclear how long Korvin has been cultivating the illusion of the opera-ghost, but since he demonstrates the ability to disguise himself and move among regular people, one might've expected that he might have already sought vengeance on Baron Hunyadi for having indirectly brought about Elena's death.  Instead, the mountain comes to the Mohammed-phantom, for Hunyadi shows up at the opera.  History repeats itself as Hunyadi also puts the make on Maria.  The Phantom comes up with a unique way of executing Hunyadi, unleashing a "murder" of hostile crows upon the baron.  I assume this is an ironic comment on Korvin's name, since in Latin "corvus" means crow or raven.

For a time Maria keeps the secret of her mysterious tutor, but eventually Korvin loses the ability to distinguish his pupil from his dead wife, and he abducts her to his underworld.  This Phantom's subterranean lair is depressingly bare of enchantment, and Maria shows no pity for her deformed benefactor.  Indeed, this film's version of the unmasking-scene isn't prompted by feminine curiosity.  Rather, Maria yanks off the Phantom's mask to distract him while she attempts to escape.  It doesn't work, so Michael has to come to her rescue (incidentally fighting the ratcatcher in much the same way Hunter fought with the mute henchman in the Hammer version).  After Michael escapes with Maria, Maria returns to the stage, singing the diva's role that the Phantom secured for her.  The frustrated Phantom attempts to drop the chandelier on the audience, but does so by clinging to the chandelier-chain while doing so.  The chandelier crashes down with him along for the ride, so that he kills himself and some others.  Regrettably, the tedious Michael and Maria both escape death.

Thus far this is the weakest version of the classic story, not because it borrowed from other versions but because it did so with no sense of style or passion.


Posted by Gene Phillips at 11:19 AM
Email ThisBlogThis!Share to TwitterShare to FacebookShare to Pinterest
Labels: bizarre crimes and crimefighting (u), freakish flesh (u), outre outfits (u), perilous psychos (u), phantasmal figurations (u), the uncanny