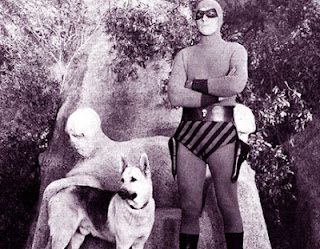 
THE PHANTOM serial was the first live-action adaptation of Lee Falk's comic strip, as well as the last serial production from silent-film veteran B. Reeves (UNDERSEA KINGDOM, PHANTOM EMPIRE) Eason.  Among serial fans it seems to enjoy only a modest reputation.  Most fans agree that lead actor Tom Tyler looks great in the Phantom costume, but that the serial isn't that remarkable in other respects.

Though this Columbia serial may be slightly lighter on action-elements than some of the faster-moving chapterplays, and lacks a strong villain, it does a fine job at putting across the mythic appeal of a comics-character.  The Phantom is somewhat politically incorrect these days, in that he was a white man who donned a costume in order to gain the cooperation of jungle-tribes in aiding his fight against evil. That said, THE PHANTOM fortunately plays down the racial elements of the hero's modus operandi.  As with many Tarzan films, the hero finds himself defending good white intruders, exploring Africa in the name of science, against evil white exploiters out to plunder the country or oppress its inhabitants.  In this case, the good white people are led by Professor Palmer and his daughter Diana, searching for the lost (but still inhabited) city of Zoloz, while the evil ones seek to loot Zoloz of its treasure and use it as a base for Nazi activities (though the Nazi elements also are not strongly emphasized).

Like most serials PHANTOM is extremely episodic, as the hero trails the villains, attempting to undo their evil plans at every turn.  One aspect of the "Phantom myth" that the serial successfully captures is the hero's illusion that he is an unkillable "ghost who walks."  Thus whenever the Phantom survives one of the villain's death-traps, he bolsters his legend in the villains' eyes, whereas in most serials the hero's survival connotes nothing to the villains but his extreme dumb luck.  In contrast to most serials, where the conclusion has little to do with the opening, the continuity opens with the villains killing the Old Phantom (father of the young one played by Tyler) and ends with the assassination of a phony Phantom.  Comically, one of the villains sees this and says something like, "This is where I came in."

The Phantom's "outre outfit" automatically qualifies the serial for inclusion within that category, and of course the lost city of Zoloz fits the "exotic lands and customs" trope, even if the inhabitants are rather risible in that the city-dwellers are clad in what look like castoff costumes from various historical movies  (Elizabethan guards, Mongol princes, etc)  Many jungle films use animals that aren't especially "astounding," but the hero's arena-battle with a trained ape (named "Brutus," no less) deviates from the more naturalistic applications of that trope.  Finally, this Phantom does make use of stage-magic to sell the illusion of his deathless nature; one of the few deviations from the original that seems an improvement.

Lastly, female lead Jeanne Bates portrays the first live-action version of the Phantom's perennial squeeze Diana Palmer.  Unfortunately, whereas the comic-strip heroine was relatively resourceful, this Diana faints at the sight of a killing and serves little purpose in the stories except as a cheerleader for the protagonist.
Posted by Gene Phillips at 5:31 PM
Email ThisBlogThis!Share to TwitterShare to FacebookShare to Pinterest
Labels: astounding animals (u), combative adventures, enthralling hypnotism and illusionism (u), exotic lands and customs (u), outre outfits (u), the uncanny