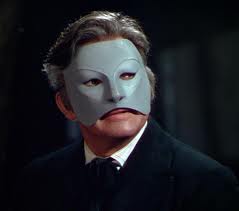 
Universal's second stab at the PHANTOM story, filmed on the same opera-sets built for the 1925 film, launched a counter-version of the story that has had its own influence over the years.  Here Leroux's key idea of a Phantom deformed from birth was replaced by that of a normal man transformed into a freak by some type of physical attack. The same trope would later be used in Hammer's 1962 remake of this story and in 1974's PHANTOM OF THE PARADISE.

Very little of the Leroux story survives this reconfiguration.  Christine (now given the surname DuBos and played  by Susanna Foster) is still an up-and-coming soprano, but she's never tutored directly by this film's Phantom.  Instead of a normal boyfriend and a "demon lover," this Christine has two potential boyfriends, a fellow opera-singer named Anatole (Nelson Eddy) and a police inspector who's given the name of the novel-boyfriend, Raoul.  Possibly the scripters felt that the story needed that extra romantic conflict because their Phantom's role as potential seducer is marginalized if not entirely elided.

As noted in earlier essays, the early part of the Leroux novel suggests that the Phantom (Claude Rains) may be Christine's father, somehow returned from the dead, because he knows so much about the "Angel of Music" story related to Christine by her father. In addition, at one point the Phantom manifests near the same gravesite where the father lies buried, a detail resurrected for the Andrew Lloyd Webber musical.  None of these associations appear in the 1925 film.  According to various sources, including film historian Scott McQueen on a recent Universal DVD release of this film, an early script treatment intended that this Phantom--  Erique Claudin, a violinist employed at the Paris opera-house-- was Christine's still-living father, whom she did not recognize and from whom she was separated due to assorted complications.  Apparently certain producers apparently felt that the basic intonations of the Phantom story would imply some incestuous relationship.

If so, it would have been on one side alone.  In this film, violinist Erique first encounters Christine at the opera-house, and becomes obsessed with nurturing her talent-- so much so that he beggars himself to become her secret benefactor, paying a singing-teacher to give Christine lessons for the next three years.  Christine makes excellent progress but the lessons end when Erique loses his job with the opera.  Still consumed with the desire to promote Christine, Erique tries to market an original concerto.  Circumstances conspire to make Erique think that a music-publisher is stealing from him.  This Erique-- who is considerably more mundanely pathological than the twisted genius of the book-- goes mad and kills the publisher.  The publisher's secretary hurls developer-fluid in Erique's face, scarring him.  He flees the murder-scene and takes a tortured refuge in the Paris sewers, which in turn take him to the subterranean lake beneath his old place of employment.  None of these setbacks dull his obsession with Christine. He dons a mask to conceal his scars and tries to force the opera's managers to give Christine greater roles.  When they refuse, he unleashes more mayhem.

To be sure, this level of obsession doesn't play all that well coming from an unrelated stranger with no romantic intentions.  Some parts of the script still suggest the earlier idea of a real paternal relationship.  Both the Phantom and Christine are familiar with an old lullaby from their native town Provence, a tune Christine claims to have known from childhood.  It's likely that this is a holdover from an earlier script, in which the lullaby would have provided a clue to the father-daughter relationship. Near the climax, when the Phantom drags Christine down into the catacombs, he claims that he's "always" protected her, which seems a strange remark if he's only known her for three years. Had the film kept the idea that he was her father, perhaps his abduction would seem less like a seduction, but in this final version, the Phantom sounds less like a disinterested benefactor and more like a madman on the make.

The scene in which Anatole and Raoul brave the Phantom's lair jettisons any of the perils that assailed Christine's rescuers in both original book and movie.  The climax seems to have been jerkily written, perhaps because it was striving to rework the original "father knows best" concept.  In scenes not used for the finished version, inspector Raoul was to have learned the truth about Erique's relationship to Christine, though he swore to keep that fact secret.  At the climax, Anatole and Raoul burst in upon the Phantom just as Christine unmasks him, and the Phantom defensively reaches for a conveniently-placed sword.  One might expect that in the earlier script Raoul might try to spare the life of Christine's demented father, and might even try to stop someone else from killing the Phantom.  But in the finished film, baritone Anatole-- who has no reason to give two hoots for the Phantom's life-- flings his arm up and diverts a shot from inspector Raoul.  That said, perhaps the only reason Anatole acts so strangely is that the film needed someone to precipitate a gunshot at the ceiling, which for some inexplicable reason causes the whole roof to fall in, burying the Phantom while the good guys escape with their pretty prize.

I mentioned earlier that Mary Philbin's Christine in the Chaney film seems at times rather intrigued by her invisible teacher, even though the viewer never sees her receiving lessons as in the book.  Only once does the Phantom speak to Christine through some secret compartment, urging her to accept his personal tutelage. But this more realistic version of Christine is not the least bit intrigued, instead becoming mildly freaked out by this overture from nowhere.  At film's end she evinces some pity for unfortunate Erique, though it's not clear as to how much she knows about his murderous escapades.  Nevertheless, some later Phantom films would pick up on a trope established here, in which Christine and her "demon lover" interact musically: with Christine singing while the Phantom plays his concerto on an organ-- just before Christine unmasks him.

The "big reveal" doesn't attempt to top the superlative Chaney makeup; allegedly star Claude Rains didn't want to get typed as a "monster." Yet it must be admitted that the Phantom's underwhelming visage is of a piece with his persona.  This Erique is never the master fiend of the novel and the 1925 film, but a more pathetic figure.  For this reason I give this version of the Phantom an additional "uncanny trope" that I didn't assign to the earlier works: the "perilous psycho." Whereas the Phantom of Leroux and Chaney was a Satanic figure out of Milton, twisted by his more-than-human sufferings, the Rains Phantom shows telltales signs of insane behavior even before he gets scarred.  This Phantom has none of the original's resources, but he does duplicate the famous chandelier-dropping scene with fair panache.

It's commonplace to mention that this is more of a musical-romance film with some mild horror-elements, rather than a horror-film in the (bloody) vein of earlier Universal monster-movies.  In its orientation this PHANTOM has more parallels with another of director Arthur Lubin's romances-with-fantasy-elements reviewed on this site, NIGHT IN PARADISE.  And in contrast to the traditional romantic closure seen in the book and the Chaney film. this Christine chooses her career over both of her rescuers, so that the guys end up commisserating with one another.  An end-shot suggests that the Phantom may survive his apparent doom at the story's end, and indeed Universal did consider a sequel after the 1943 film proved the year's big moneymaker for the studio.  However, no official sequel was remade, though the script was reworked into an unrelated project, 1944's THE CLIMAX.  To my knowledge, no one has ever done a series-- even a series of two-- interrelated PHANTOM OF THE OPERA films.
Posted by Gene Phillips at 6:34 PM
Email ThisBlogThis!Share to TwitterShare to FacebookShare to Pinterest
Labels: bizarre crimes (u), freakish flesh (u), outre outfits (u), perilous psychos (u), phantasmal figurations (u), the uncanny