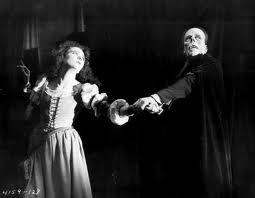 As noted in this essay, I recently reread Gaston Leroux’s PHANTOM OF THE OPERA, partly to analyze the book itself in terms of my NUM theory, partly to compare the original to as many film-versions as possible.


In my experience thus far, the first version, starring Lon Chaney Sr. and directed by Rupert Julian, comes closest to the Leroux novel.  And yet, appropriately enough, the 1925 version is, far more than the novel proper, responsible for promoting the idea that heroine Christine may be a little less than innocent in her relationship with her “demon lover.”


I stated in my book-review that the novel has five principal characters: Erik the Phantom, Christine, her young boyfriend Raoul, Raoul’s elder brother Phillippe, and the Persian, a mystery-man who’s seen briefly at the outset and who appears at the novel’s end to help Raoul battle the Phantom.  The movie keeps all five characters, though with alterations. The film’s Phillippe has no real function beyond providing Raoul with someone to talk to, albeit briefly, and he doesn’t suffer a sacrificial death at the climax.  The Persian is changed into a member of the French Secret Police named “Ledoux” (a tip of the hat to “Leroux?”), and he knows about Erik’s history and activities simply because he’s been investigating the Phantom, not because the two of them are old friends.  Ledoux was a necessary change since the film drops almost all references to Erik's travels in the Orient, though the Phantom still retains his thuggee-like skill with the lasso known in both book and film as “the Punjab knot.”


Most of the book’s major sequences are retained in the film, albeit compressed and sometimes re-arranged.  I mentioned in the earlier essay that the novel’s Phantom had the habit of allowing others to see him in public sans any makeup, even though he had ample disguise-skills.  Naturally Chaney’s Phantom keeps resolutely masked until the classic unveiling-scene, which is given much more emphasis than the cognate scene in the novel.  In addition, this Phantom is never compared to an “Angel of Music” sent from heaven to nurture the singing-talent of Christine (Mary Philbin). But then every aspect of Christine’s history gets jettisoned, including her childhood acquaintance with Raoul and her father’s prediction that she would be succored by an “angel.”  The question then arises: since this Christine doesn’t think that the phantom in the opera is a ministering spirit, what does she make of his strange existence?  The film doesn’t hold forth on Christine’s feelings toward the Phantom, but in the first two scenes where she speaks to him through the walls, she seems excited at the approach of her “master.”  I would argue that Mary Philbin’s performance is the first to suggest that Christine is erotically intrigued with her unseen teacher, though of course this Christine doesn’t sigh and moan like some of her later descendants.  She also doesn’t have as much reason to deem him a murderer, since a hanging-death that occurs at the novel’s beginning is moved to the movie’s end.


Oddly, this PHANTOM contains no scenes in  which Erik’s seen tutoring Christine, and only one indirect reference to the "art" he passes on to her.  Yet the lack of such scenes—as well as the lack of a history for Erik, or much about how he operates beneath the opera-house—have the effect of making this Phantom much more surrealistic than the novel’s version. The novel gives its readers a painstaking explanation as to how the Phantom got hold of one of the opera’s horses, which he later uses to give Christine a ride down into his lair.  The film dispenses with such mundane explanations.  Thus the subterrenean appearance of the horse, like the boat the villain uses to pole across the underground lake, reinforces the sense of the Phantom’s unutterable strangeness.


Though the film wastes no time on the Phantom’s history, he still has a variety of weird death-traps in his lair, such as a mirror-lined room which bombards Raoul and Ledoux with concentrated heat and a device capable of blowing up the opera-house.  However, the novel’s conclusion—in which the Phantom more or less expires from his frustrated love—was wisely dropped.  Instead, the Phantom’s execution of an opera-worker whips the other workers into a torch-and-pitchfork frenzy.  They overtake the Phantom after he’s lost Christine to Raoul, but even though the villain suffers an ignominious end, he manages one last “spit-in-the-eye” gesture of defiance.


Leroux’s novel would beget many more versions of his one renowned character.  Some were decent, some mediocre, some awful.  But to this day, only the Chaney-Julian version remains a classic in every sense of the word.


ADDENDA: Though the DVD I reviewed isn't labelled as such, it's likely that this is the recut 1929 version of the original 1925 film, as the DVD was from Catcom, a company specializing in public-domain releases.
I also negelected to mention one other point related to the film's phenomenality.  In my review of the book, I mentioned that while Raoul and the Persian sojourned beneath the opera-house, they encountered a spectral presence that may have been what Leroux maintained was a true "opera ghost."  I failed to mention that this was only one of two figures the two men encounter, the other being a weird-looking ratcatcher driving rats before him like cattle.  The PHANTOM film has Raoul and Ledoux encounter one strange-looking, luminescent-faced individual who speaks as if he's some sort of ghost, but as in the book, there's no irrefutable proof (say, the figure walking through a solid wall, etc.) that he really is a ghost.  As I've not read the shooting script I can't say if this figure was intended to be either of the book's two presences.

Posted by Gene Phillips at 2:49 PM
Email ThisBlogThis!Share to TwitterShare to FacebookShare to Pinterest
Labels: bizarre crimes and crimefighting (u), diabolical devices (u), freakish flesh (u), outre outfits (u), the uncanny