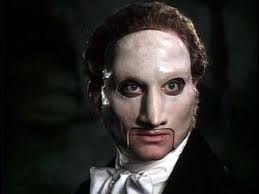 
This 1990 telefilm, scripted by Arthur Kopit from his own theatrical adaptation of the public domain Phantom, originally played in two parts on television.  Unlike many film-adaptations, Kopit’s script mines quite a bit of detail from the Leroux novel.  Like the contemporaneous Andrew Lloyd Webber Broadway version, Kopit’s story places strong emphasis on the book’s “eternal triangle,” between the female singer, her appropriate young swain and her tutor, even though the tutor is no longer older, nor suggests anything relating to the singer’s father.


At the same time, though this Phantom isn’t softened in the same way one sees in the 1943 and 1962 adaptations, Kopit goes even further to eliminate elements of danger and horror in the script.  This time the struggle is between two young men for one young woman, though the shadow of an older man does intrude to some extent.


The film, directed by Tony Richardson, fulfills the stereotype of television direction: everything’s shot from flat, uninventive angles and there’s no sense of style devoted to even the most artistic elements.  This is a shame because Kopit and Richardson had a chance to bring a strong faerie-tale atmosphere to the project.  Their Phantom, in contrast to the ones seen in 1943 and 1962, has dwelled beneath the Paris opera-house long enough to build a substantial legend, though Kopit goes even further than Leroux by claiming that this Phantom was raised in the catacombs.


No attempt is made to project any mystery into the Phantom’s presence.  The film begins with a change in managers at the opera-house, as did the book.  In the book, however, the changeover was the result of a sale from one owner to another.  Here, long-time manager Carriere (Burt Lancaster) is dismissed from his position, and the supercilious new manager has acquired this post in order to accommodate the diva-aspirations of his wife Carlotta.  Carriere warns the new manager of the presence of the Phantom. The new manager does not believe, but gets flustered when things fall off the walls without explanation.  The moment Carriere is alone, however, the Phantom (Charles Dance, attired in a cloak and a mask reminiscent of Harlequin) appears, and the two of them become distressingly chatty.  Plainly Kopit expects his audience to know that Eric, aka the Phantom, lives beneath the opera-house, and wants to get that out of the way, as well as quickly establishing Eric’s motivations for keeping people away from his subterranean domain.


What will he do to keep that privacy?At one point, it’s strongly implied that Eric kills a man sent to explore the building’s lower regions.  Yet aside from that incident, and the de rigeur “dropping of the chandelier,” Kopit tries, like Anthony Hinds in the ’62 PHANTOM, to keep Eric’s hands as unstained as possible. Most of the Phantom’s actions are rather prankish, as if, despite his fine attire and mellow voice, he’s still a big kid at heart.


As Carriere exits, Christine (Teri Polo) arrives at the opera, at the behest of a character who is essentially the same as the book’s “Raoul,” though Kopit renames him after his brother, making him “Count Phillippe deChagny.”  In a flashback-sequence Kopit touches on the book’s idea that Christine and her intended became acquainted as children.  Even Christine’s father, so important to the book, makes a rare cinematic appearance in this 1990 story.  In adulthood Phillippe meets Christine without recognizing her, though she knows him.  When Phillippe hears her exquisite voice, he sends her to Carriere for lessons, not aware of the manager’s dismissal.  Christine gets no sympathy from Carlotta, who, like some evil stepmother, refuses to hear Christine sing and puts the girl to work in the costume department.  The young woman is equally disturbed to learn that Phillippe may be in the habit of sending many girls for “lessons” that lead to seduction.


Later, when Phillippe shows up, he makes clear that his intentions were sincere.  By that time, Christine has received another tutor (and eventually, a suitor).  The Phantom hears her sing and wants to nurture her talent.  He eschews the talking-through-walls approach that reaped few rewards for Claude Rains and Herbert Lom, and approaches Christine directly, explaining his mask as simply a means of remaining anonymous.  She accepts the offer of lessons.  Not least because he’s young, charming and well-spoken, Christine falls somewhat in love with her mysterious masked teacher.  Thus Kopit sows the seeds for the competition of the two male leads, though to be sure, this Christine is far more fully realized than most.


The Phantom avenges Christine’s wrongs by persecuting Carlotta, sabotaging her performances so that she becomes a laughing-stock.  Then, acting on the Phantom’s guidance, Christine shows off her talent at a party—a demonstration that becomes an amusing singing “duel” with Carlotta, a duel the older woman loses.  The manager signs Christine up, but Carlotta contrives to ruin the ingenue’s debut.


After taking a measure of revenge upon Carlotta (dumping a bunch of rats on her), the Phantom decides to forget about promoting Christine’s career.  He spirits her down to his subterranean lair.  Though Christine has had one romantic encounter with Phillippe by this time, she begins to fall in love with her masked benefactor as well.  At this point Carriere—well acquainted with the lair, since he’s the one who concealed Eric’s presence there for years—shows up.


In a long flashback he explains to Christine that he’s actually Eric’s father.  Reversing Leroux’s idea that Eric’s father and mother couldn’t even look at him, his mother—also a blonde opera-singer like this Christine—tried to take poison when she thought Carriere couldn’t marry her.  The poison may have had something to do with Eric’s deformed status at birth, but the film’s unclear on this possibility.  Eric’s mother doesn’t see his ugliness, though Carriere does, and after the mother perishes naturally, Carriere half-wishes Eric would just die.  When the child lives, Carriere dutifully allows him to live beneath the opera-house.  Ironically, even in seclusion Eric becomes a master musician; it’s he, Carriere confesses, who truly made the opera-house successful.


Kopit continues the romance-angle with Christine and Eric, at one point even having the fearsome Phantom don a straw boater!! Kopit also takes a different approach to the famous “unmasking scene:” this time, rather than having a willful girl remove the mask of her demon lover, Christine talks Eric into removing it himself.  Fascinated with his history and his suffering, she thinks that love will give her the strength to stomach the sight of any deformity.


She’s wrong, for she faints dead away at the sight of Eric’s face (which the viewing audience never sees at any point).  The Phantom goes berserk, smashing things and putting Christine in a cage.  Despite feeling immense guilt for her trespass, she escapes to the upper world and to Phillippe.  During a climactic performance, Christine begins singing a duet with the Phantom as he lurks in his special box, confusing but nonetheless thrilling the audience.  The police aren’t amused, though.  Led by Inspector Ledoux (note the name), they chase Eric to the rooftops.  The Phantom gets the satisfaction of winning an old-fashioned sword-duel with his rival Phillippe, but spares him for Christine’s sake.  In the end, he begs his father for a quick death rather than capture, and Carriere ends the film by shooting his son.


Despite some of the scripting missteps, this is a solid enough romantic melodrama. The decision not to show the Phantom’s face suggests a desire to allow viewers to retain the fantasy of Eric as “beauty” rather than “beast,” but at least he scores some romantic points with the woman of his dreams, a bounty the Phantom never received from creator Leroux.


I mentioned that the “shadow of an older man” fell over the triangular romance.  This is of course Carriere, who becomes a “daylight alter ego” to the reclusive Phantom, in that he lives his life for Eric and becomes defined by Eric’s talents.  It’s surely no coincidence that Eric’s first and only great love bears a strong resemblance to his mother.  That said, Carriere has no interest in Christine, though in one scene he seems to find her voice “familiar,” which might suggest that he too sees Eric’s mother in Christine.  This does put a different complexion on Carriere’s “mercy killing” of Eric, though as Freudian metaphors go, this one appears to be not much more than a toss-off.

Posted by Gene Phillips at 2:24 PM
Email ThisBlogThis!Share to TwitterShare to FacebookShare to Pinterest
Labels: bizarre crimes (u), freakish flesh (u), outre outfits (u), phantasmal figurations (u), the uncanny