THE ADVENTURES OF THE AMERICAN RABBIT (1986) 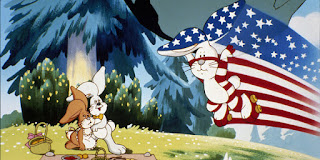 
There's not much intrinsically interesting about this American-Japanese kiddie-film, co-directed by animator Fred Wolf.  It's an undistinguished attempt to meld the basic idea of Superman (with special reference to the successful Salkind Brothers live-action adaptations) with a simple liberal message about encouraging young people to speak their minds and protest big business.

The film opens with a scene out of the Sleeping Beauty folktale.  An infant named Rob Rabbit is born to a humble rabbit-couple, but a mysterious guest predicts that he will have a special destiny.  Later, when Rob reaches teendom, he meets the mysterious stranger again.  Rob learns that he's one of many incarnations of a being called "the American Rabbit," destined to fight evil by changing into a star-spangled hero whose only attire is a pair of roller skates.  As the American Rabbit, Rob fights a gang of evil bikers led by a nasty buzzard villain, suffers a few reverses, and finally wins out.

Only one joke in RABBIT is a trifle funny, when the villain reveals his master plan to dominate the world by taking control of the world's chocolate.  The design of the hero would be risible even without the roller skates, but one wonders what animator came up with them.  Perhaps the Rabbit's creator didn't get the memo that the fad for roller-skating entertainment had peaked during the disco era?  Unfortunately, as foolish as the main hero appears, the entire film is played tediously "straight" and so qualifies, however badly, within the Fryean category of adventure.