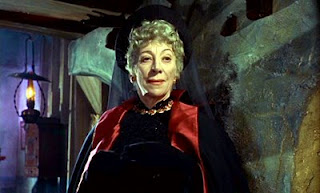 
Following 1958’s HORROR OF DRACULA, Hammer’s next exploitation of Bram Stoker’s Dracula mythos appeared in a film with no Dracula, or rather with a Dracula manqué named Baron Meinster, against whom Peter Cushing’s Van Helsing contends.  Scuttlebutt has it that Christopher Lee would not reprise the master bloodsucker for what Hammer was willing to pay.  Thus BRIDES starts off by informing the audience that, contrary to the film’s title, Dracula remains dead but that the vampire cult that spawned him and others remains an ever-present menace.  Possibly CULT OF DRACULA might have been a more appropriate title for this film. The men behind this opus— among whom were two of the key creators of HORROR OF DRACULA, director Terence Fisher and scripter Jimmy Sangster— could not have known whether or not there would be further appearances of the master vampire.  It’s possible they envisioned more encounters between Van Helsing and the far-flung vampiric cult.  Whereas Stoker’s book dimly alludes to a Satanic school, the Scholomance, which may have schooled the Count in his evil, Sangster’s script emphasizes that the vampire cult is a last survival of pagan religion, striking back against the dominant forces of Christianity through the revival of the undead.


The script for HORROR eschewed the novel’s slow build toward Jonathan Harker’s horrified realization of his host’s monstrous nature; instead, the Harker of HORROR is Van Helsing’s “secret agent,” out to destroy the Count before his evil can spread.  As I noted in my review of that film, Harker’s visit to Dracula’s castle duplicates the novel’s Oedipal fascination with Dracula’s wives, albeit cutting it down to just one wife in the film.  Before the audience knows that Harker has come to the castle on a search-and-destroy mission, he seems to be an innocent coming to the rescue of the Count’s maltreated paramour.


What was a deception in HORROR is the simple truth in BRIDES.  Marianne, an innocent young French schoolteacher, passes through a small town in Transylvania on her way to her next employment.  Circumstances come about (possibly through manipulation) in which her stage stops in that town, but Marianne can find no good lodgings until she’s invited to stay at the castle of the aged Baroness Meinster.  At first it appears that the Baroness and her aged female servant Greta are the castle’s sole occupants, but soon Marianne discovers the presence of a young man as well.  The Baroness spins a story to the effect that she confines her son to the castle because he’s mad.  Marianne nevertheless seeks out the imprisoned youth.  Meinster’s soft-spoken demeanor and good looks convince the schoolteacher that he’s unjustly imprisoned, so the young woman comes to his rescue, stealing the key to Meinster’s chains.  Shortly afterward, Marianne learns the truth from the Baroness: that because she was indulgent and allowed Meinster to fall in with an exceptionally bad crowd, Meinster became infected with the disease of vampirism.


While Meinster avenges himself upon his mother for his years of imprisonment by converting her to the ranks of the undead, Marianne (rather improbably) gets away. She's so traumatized by the events that she selectively forgets what has happened to her.  Thus, when she falls into the company of Van Helsing, who’s been summoned to the area to seek out the solution of a new vampire outbreak, she has nothing to tell him.

The script’s vague on the matter of Van Helsing's advent. Logically, the vampire hunter had to be in progress some time before Meinster obtained his freedom.  The script does allow one “out” in that prior to being vampirized, the Baroness admits that she satiated her son’s unholy bloodthirst by securing young women for him to consume.  By this method the Baroness could keep her son with her in a semblance of life rather than destroying him as she should have.  However, when Van Helsing arrives at his destination, he only investigates one case of a woman rising from her grave.  What happened to the others to whom the Baroness alludes?  Did she and her only servant manage to put them down before they could become vampires?  For that matter, did the Baroness intend Marianne to become food for Meinster? If so, the Baroness and Greta do a particularly poor job of keeping watch over the schoolteacher, and apparently miss an easy opportunity to drug Marianne during their first and only dinner together.


While Van Helsing investigates, Marianne proceeds to her place of employment, but Meinster follows her to her new ladies’ school.  Soon he’s enthralled Marianne and several other females—the “brides” of the title.  Van Helsing contends with the new vampire-lord and almost gets vampirized himself, but by film’s end the crusader vanquishes the corruption, climaxing with Hammer’s most spectacular vampire-execution.


In DREADFUL PLEASURES James Twitchell takes the hyper-Freudian position that Dracula and all his kindred represent the tyrannical father, always oriented on keeping all the community’s young women for himself.  This might apply moderately well to HORROR OF DRACULA, but BRIDES breaks with the pattern by emphasizing a tyrannical son-figure. Meinster’s youth isn’t even an illusion created by vampiric powers: he really is just a nasty young man who happens to be undead.  The script doesn’t work very hard to portray Meinster as a formidable new villain, and in some ways the psychology of the Baroness is more interesting.  After her husband perishes, does she compensate for the husband’s loss by allowing her son every indulgence?  After he’s become a vampire, the Baroness supplies him with young women.  Are these surrogates for her own incestuous desires?  That might explain her laxity with Marianne, which ends up with the release of her son, who immediately vampirizes the Baroness rather than Marianne.  In her final scenes as a vampire before Van Helsing executes her, she seems rather less than tormented by her fate.  Meinster’s battle with Van Helsing is physically impressive, but he’s such a bland villain that it’s not surprising that Hammer didn’t continue to spawn more “sons of Dracula.”  Within a few years, Dracula himself returned with a vengeance, and any vestiges of a far-flung vampire cult would remain subordinate to his mythic authority.


Posted by Gene Phillips at 2:48 PM
Email ThisBlogThis!Share to TwitterShare to FacebookShare to Pinterest
Labels: combative dramas, the marvelous