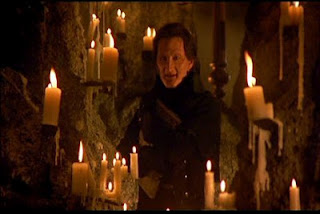 
Due to the casting of Robert Englund as the Phantom, Freddy Kruger casts a long shadow over director Dwight Little's take on the opera-ghost.

Most versions of the Leroux story simply allude to the story of Faust as a counterpoint to the Phantom's Satanic ambitions.  This time the Phantom, re-christened "Eric Destler,"becomes a literal follower in Faust's footsteps.  Composer Destler, hungry for the fame his genius deserves, makes a deal with the devil so that Destler's music will receive universal acclaim.  The devil, perhaps borrowing a little from Wagner's Rhinegold, attaches a codicil to the deal, cursing Destler with supernatural powers, limited immortality, and phenomenal ugliness, so that no one will ever love Destler for anything but his music.  In a different film, this might have been an interesting comment on the disconnect between artistic recognition and personal gratification, but here it's just a means to stoke the fires of the gore-train. (Not that there's automatically anything wrong with that.)

This devil-cursed Phantom is at least as disgusting as Freddy (he's briefly seen as noseless, like Leroux' villain).  Additionally, the storyline resembles the structure of the Freddy-films in that the bulk of the storyline takes place in a dream framed on either side by "waking reality," with the two interpenetrating to some extent.

The tale begins in contemporary New York, as Christine Day (the sadly underrated Jill Schoelen), college student specializing in classical and operatic music, researches the work of famed 19th-century composer Eric Destler in a music store, and even sings a few bars of his opera "Don Juan Triumphant" (one of many references taken from Leroux).  She has a dreamlike episode, imagining drops of blood upon the manuscript, but the illusion passes.  She rushes from the store to the local opera-house, where she auditions for an operatic role by singing a selection from Destler's opera. Like an evil omen prompted by the music, a sandbag falls from the rafters and clouts Christine into dreamland.

A moment later, she's another Christine, who's also just been smacked by a falling sandbag-- but this one's at the London Opera House in Victorian England.  Unlike modern Christine, this one already has a job at the opera, so she's taken to a room therein.  A few minutes later, the careless stagehand who dropped the sandbag receives an extreme punishment from the opera's resident ghost.  Strangely, the stagehand seems on familiar terms with the supposed ghost, but he doesn't live long enough to disclose their relationship.  The nature of Destler's connection to the London Opera House doesn't receive the attention seen in the 1943 movie and the 1990 telefilm, but one assumes that this opera is simply the place Destler worked before he made his Satanic pact.

As Victorian-era Christine shows off her talent, she attracts the fascination of both the Phantom and young swain Richard Dutton, as well as the emnity of resident diva Carlotta.  This version of Christine shares some of the innocence of the book's version, and actually still believes in her father's legend of an Angel of Music.  In addition, Schoelen's Christine would seem to be the first film-heroine since Mary Philbin to show erotic interest in the mysterious man who speaks to her through the walls of her dressing-room.  One may infer some influence here from the 1986 Andrew Lloyd Webber stage-musical version.  In any case, Christine again accepts the Phantom's offer. It's not clear if she's ever told about the gruesome death of the stagehand, found as a flayed corpse in the diva's dressing-room.  If she had, one might expect her to be a little more hesitant about entering into this bargain.  Nevertheless, a Svengali-like relationship evolves, with Destler urging Christine to sing with greater "passion," while he tries to exorcise his fascination with her by partaking of a hooker whom he names "Christine."

The script nicely translates a scene from Leroux's book in which Destler serenades Christine on a violin in the graveyard when she visits her father's grave, while Richard jealously looks on.  Though Christine still doesn't know Destler's terrible secret, her spiritual fascination with her mysterious teacher leads her to accept his invitation to meet him in his underground lair.  There, he plays his opera for her on the organ.  To his astonishment, she sings the lines without having read them, one of two scenes in which past-era Christine accesses the thoughts of present-era Christine.  In another scene taken from Leroux, the Phantom deems that they've become engaged.  Though he releases her to continue singing on stage, he makes her wear a ring and tells her not to see anyone else.

Inevitably, Christine turns to Richard, a less demanding suitor, leading the Phantom to force his beloved back into his ghastly domain.  (As a side-thought he kills off Carlotta before so doing.)  Richard joins with the police and storms the lair, resulting in the death of the cops, the local ratcatcher (who's introduced just to give Destler another target), and, rather surprisingly, Richard.  This may be the first Phantom-tale in which the young swain-character doesn't survive. Christine alone is left to face off the Phantom in time-approved "Final Girl" style, but in the swirl of violence that results, it's not clear whether or not Christine escapes the Phantom after a policeman shoots him--

--for just then, modern Christine's dream ends, and she awakes on the stage in New York.  One of the solicitous people attending her is a man named Foster, who just happens to be a dead ringer for the dream-figure of Eric Destler.  She accepts Foster's offer to meet at his apartment, but to no one's surprise it's immortal Destler in disguise.  But Christine uses the insights she's gleaned from the dream to destroy the cursed musician, apparently for all time.  (A script for a sequel was written but was never adapted in any form because this PHANTOM didn't perform well at the box office-- another frustration for horror-fans curious as to how a Phantom-sequel might turn out.)

Production values are high and Little's direction is strong, capturing the "gaslight romance" characteristic of the era.  Schoelen is currently my favorite Christine, even acing out Mary Philbin. As for Englund, he largely succeeds in distinguishing the tragic Destler from Freddy Kruger.  True, the script requires that he spout a few nasty witticisms as he kills people, but at least the tone is mordant and sardonic, not gleefully sadistic as with Freddy.

I've barely touched on the gore-murders, for they are the film's weakest elements.  While some PHANTOMS suffer from being stripped of their horror-aspects, the gore-scenes here-- which are essential to the Elm Street franchise-- are a distraction from the main plot, which successfully translates a lot of Leroux's story, albeit through a lens devilishly.  Admittedly, Destler's killings have a more definite function than Freddy's killings, for Destler flays the skin of his victims and uses the pieces to cover his hideousness.  But the killings are mostly pretty tedious affairs, even if I liked one scene in which Destler decimates a trio of London footpads.  Possibly this film would have enjoyed greater success from sticking closer to the romantic elements seen in the Webber musical, even if Robert Englund might be a hard sell as a romantic icon.