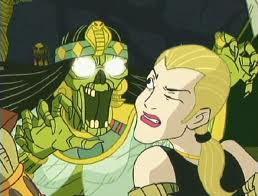 
It's not that much of a compliment to say that this is the best of the Scooby-Doo direct-to-video films, since most of them are pretty lame.  But even if one isn't a big fan of the Great Dane and his not-so-great coterie of mystery-solvers, MUMMY is a fast-moving comedy-adventure with good design-work (particularly on the Egyptian settings and furnishings) and some decent jokes.

Directed and co-written by Joe Sichta, a veteran of the WHAT'S NEW, SCOOBY DOO teleseries, MUMMY tosses in some nice contemporary spoofs ("Fear Factor" becomes "Fear Facers") and a better-than-average villain (seen above, being menaced by a mummy-queen) with the risible name of Amelia Von Butch.  This time Scooby and his pals have come to Egypt to help out Velma, who's participating in an archaeological excavation.  Von Butch and her gang of treasure hunters intrude, just as the mummy of Cleopatra comes back to life, along with a small army of equally menacing mummy-soldiers.

It's no great giveaway that the supernatural menace in a Scooby-Doo story is not the real thing, and when the Big Reveal comes, it's not any more convincing that most Scooby-solutions.  But though the mummies are phonies, the flick is still within the domain of the marvelous, thanks to a separate (and mostly irrelevant) plotline in which Scooby and Shaggy are menaced by a giant robot scorpion.  That said, the phenomenality of all Scooby Doo movies is automatically marvelous just by virtue of having a talking dog in all the stories, no matter whether the monsters are real or not.
Posted by Gene Phillips at 3:21 PM
Email ThisBlogThis!Share to TwitterShare to FacebookShare to Pinterest
Labels: the marvelous