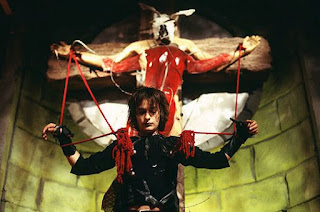 
I'm far from opposed to sequels, but the concept framed by the original CROW film in 1994 doesn't lend itself well to subsequent entries.  "Young man and his fiancee are unjustly killed, and he comes back from the dead to avenge himself on the killers."  There's a certain purity to such basic revenge-fantasies, but it's hard to expand on the character's cosmos in that the method of his resurrection and empowerment were designed to be as *mysterioso* as possible.

One small advantage of this concept is that the resurrected hero doesn't always need to be the same character.  The character Eric Draven, played by Brandon Lee, was never revived (in either sense of the word) by any of the sequels in the series.  CROW: SALVATION, like the previous sequel in the series, starts over with a new character, Alex Corvis (Eric Mabius), who's been falsely accused of his girlfriend's murder.  Corvis perishes in the electric chair, but a mysterious crow-- implictly a spirit from another world-- revives him.  In his new identity as a supernatural avenger, Corvis cannot be harmed by ordinary weapons unless something breaks his link with the crow-entity.  Out to find the killers of his girlfriend, he makes an ally of her sister Erin (Kirsten Dunst).  Eventually he learns that one of the villains involved is Erin's father, one of a group of criminal cops.

Mabius and Dunst give good performances, but the action-scenes are unremarkable, and the metaphysical undertones of the CROW concept are uninspired.

Whereas SALVATION sticks fairly close to the template provided by the original film, the third sequel (and so far the last) at least shifts in a new and prospectively richer environment: a mining-town on a Native American reservation somewhere in the American Southwest.  The film adapts a novel based on the Crow concept by one Norman Partridge, which I have not read, but it's ingenious to associate the concept of "the Crow" with Amerindian culture, given that crows and ravens play a significant role in many Amerindian myth-systems.

In addition, whereas the Crow-series has never been known for outstanding villains, this entry, presumably following Partridge's novel, ups the ante by introducing a gang of Satan-worshipping motorcyclists who style themselves War, Famine, Pestilence, and Death, which suggests a potential conflict between Amerindian paganism and apocalyptic (albeit inverted) Christian culture.  "Death" (David Boreanaz) is the leader of the group, who also goes by the last name "Crash," and he has a chippie girlfriend with the last name "Byrne"-- which leads to an inevitably tortured pun that even I, a lover of bad puns, couldn't tolerate.  The Satanic cyclists, who cherish the idea of becoming supernatural vessels of Satan, perform ritual murder upon one Jimmy Cuervo (Edward Furlong) and his girlfriend.  However, Cuervo comes back as the Crow and begins knocking off the evildoers one by one.

In the hands of a more experienced production team, and with a little more money behind it, WICKED PRAYER might have been a good basic asskicking adventure, no matter how slenderly it invoked the myths of either "white" or "red" cultures.  But though the action-scenes are better than those of SALVATION, they're still far from outstanding, and allegedly many of the Crow's scenes are derived from other films, adding to the cut-and-paste feel of the narrative.  As written, main villain Luc Crash might have been an excellent foe-- particularly since he does become a Satanic powerhouse for a time-- but any appeal he may've had is undercut by a disinterested performance by Boreanaz.  (Like Jesscia Alba, Boreanaz seems to be one of those rare actors who gets worse the longer he's in the biz.)  Edward (TERMINATOR 2) Furlong tries gamely to portray this version of the haunted hero, but he's less than compelling.  The script alludes to the marginalized status of Amerindians in American culture but doesn't manage to say anything of consequence.  The most I can say for the film is that if it does remain the last in the series, at least it tried to change the routine somewhat.

Posted by Gene Phillips at 1:16 PM
Email ThisBlogThis!Share to TwitterShare to FacebookShare to Pinterest
Labels: combative adventures, the marvelous