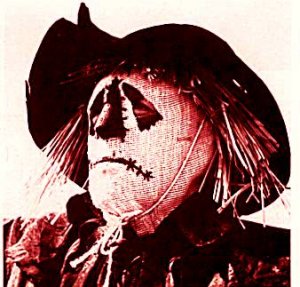 In the early 20th century Russell Thorndike wrote several swashbuckling novels about the 18th-century hero-villain Doctor Christopher Syn.  Syn had been the bloody-handed pirate Captain Clegg in his younger years, but he faked death and assumed a new identity as Syn, vicar of a small coastal village near Romney Marsh in Kent.  Many of the locals supplemented their meager livelihoods with smuggling, and so suffered retribution from the King's soldiers.  Thus Syn determined to help his fellow villagers by managing the smuggling operations under the masked identity of the Scarecrow.  His closest aides also dressed up as boogeymen, the better to make onlookers think them phantasmal spirits.

DOCTOR SYN was both the first film adaptation of Thorndike's series and the last film of star George Arliss.  Arliss, 67 at the time of filming, was in some sense an unlikely choice for the masked crusader, but the film's English producers solved this difficulty by stressing that Captain Clegg has been "dead" quite a long time.  Arliss is never seen clearly in Scarecrow-regalia (though his assistants are glimpsed by the King's soldiers, pretending to be phantoms), and the name of the Scarecrow is only used once or twice.  This Syn even has a grown daughter Imogene (Margaret Lockwood), who lives in the same village but has been raised by adoptive parents without knowing that Syn is her father.  One presumes that he wanted her raised separately to safeguard his identity.  Imogene's mother (who had the same name) was killed by one of Clegg's crew, a manic mulatto, whom Clegg strands on a desert island.  The mulatto survives and is one of the tools that the king's soldiers use in their efforts to ferret out the Scarecrow's identity.  There's a pleasant if disposable subplot about Imogene wanting to marry a man above her commoner station: naturally, by film's end true love wins out over class restrictions, and Clegg/Syn, though technically a criminal, escapes the clutches of an unjust legal system.

SYN is directed very smartly by Roy William Neill, later known for his exemplary Sherlock Holmes films.  Neill manages to keep the film moving at a rapid clip with a wide variety of horseback scenes, though there are relatively few scenes of actual violence for this type of film.  To be sure, though, Arliss's Syn does actually engage in one fight-scene in which he beats down a younger opponent and kills the nasty mulatto with a harpoon for good measure.  In contrast to the Holmes films, the uncanny aspects aren't put across with the sort of spooky mood one might have expected from Neill.

DR. SYN, ALIAS THE SCARECROW was first shown on television in separate parts on the Wonderful World of Disney teleseries, and later collected for theatrical and DVD showings. Given the nature of the project, SCARECROW is much more episodic than SYN, and places little emphasis on the vicar Christopher Syn's past history as an ex-pirate.  The Scarecrow and his men operate in full costume but they make no attempt to portray themselves as phantoms as they carry on their smuggling operations while undermining the king's soldiers and press-gangs.

As with Disney's 1957-1961 ZORRO teleseries, the scripts validate the lawbreaking activities of a swashbuckling rebel by framing his activities against an evil hegemony that oppresses the people as a whole.  This time both Syn and Scarecrow are portrayed by thirtysomething Patrick McGoohan, who, forty years before Christian Bale's Batman, gives his masked identity a harsh, grating voice that conceals his identity just as well as the stunning Scarecrow-mask.  (For that matter, McGoohan's scary-voice blows Bale's out of the water).

However, despite the greater youth of the actor playing the masked hero, the direction and script doesn't include much more action than DOCTOR SYN.   I remembered watching the teleseries' original broadcasts and being disappointed that the Scarecrow didn't get into more swordfights or gun-fights, in marked contrast to the impressive fencing-battles of ZORRO.  Director James Neillson had worked on two ZORROs before SCARECROW, and seemed able to adapt to the strong action qualities of a single BATMAN episode later on ("The Clock King's Crazy Crimes").  So I suspect that someone in the Disney organization decided to emphasize suspense over swordfights, which resulted in scripts full of talk talk talk.

Still, even the stories are forgettable, the mask and voice of this Scarecrow carry all the spooky vibes needed for a good uncanny film, and the theme song is one of the best produced for Disney's television properties-- not just in the 1960s, but even up to the present day.
Posted by Gene Phillips at 3:20 PM
Email ThisBlogThis!Share to TwitterShare to FacebookShare to Pinterest
Labels: combative adventures, outre outfits (u), phantasmal figurations (u), the uncanny