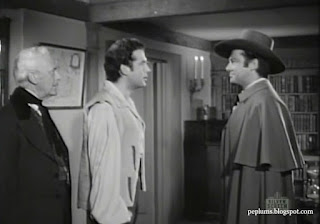 I've not read Alexandre Dumas' CORSICAN BROTHERS, and haven't seen any other adaptations of the book in recent years.  However, BANDITS OF CORSICA isn't an adaptation but a loose sequel to earlier events.  At the start, Mario Franchi (Richard Greene), a married nobleman opposed to the tyrannical governer Jonatto (Raymond Burr), believes that his brother Lucien, formerly a Siamese twin separated surgically at birth, is dead.  The truth is that Lucien is alive but amnesiac, living with a gypsy caravan but tormented by elusive quasi-memories and moments when he experiences unexplained pains.

The common image of the Corsican Brothers is that they feel one another's pains and pleasures.  However, in this film the psychic link is a one-way street: only Lucien feels sensations from his twin, which goes a long way toward explaining why Mario remains unaware of Lucien's existence until circumstances bring them together.  Noble Mario is happy to see his brother and sees his return as an opportunity to conduct a guerilla war against Jonatto, allowing Lucien to masquerade as him in regular society while Mario dons a mask and fights Jonatto's forces.

Unfortunately for Mario, the return of Lucien's memory means the return of his hatred for the brother whose existence plagues him.  Not only does Lucien plot Mario's death, he also covets his brother's wife even though Lucien has a pretty gypsy lass on the side.  In the final swashbuckling conclusion, Lucien finds himself torn between conflicting emotions, at one point saving his brother, and then attacking him, with the result that Lucien's torments are finally ended.

Though Mario assumes a mask at one point, he never uses it for any other purpose than concealment, and thus doesn't take on a particular costumed identity as seen with the Ghost of Monte Cristo.  However, this creditable B-film does use the physical fact of twinship to achieve an uncanny effect by giving the hero a way to use his "freakish flesh" to his advantage, while the psychic linkage between the brothers qualifies as an "outre skill," albeit a rather passive one.
Posted by Gene Phillips at 2:21 PM
Email ThisBlogThis!Share to TwitterShare to FacebookShare to Pinterest
Labels: combative adventures, freakish flesh (u), superlative skills (u), the uncanny