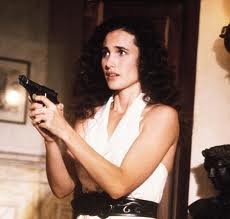 
At the time of HUDSON HAWK's release, critics pilloried it as co-scripter Bruce Willis' super-expensive self-indulgence. I had a mild liking for it then, just because it was so hyper-active-- sort of a 1940s Bob Hope comedy on steroids.  After a more recent re-viewing, however, I found that HAWK never flew as high as I thought it did.


HAWK models itself on the type of spy film where an everyman gets drawn against his will into spy-games by competing organizations. In this case, Willis' title character, a professional burglar who was unjustly framed by one of those organizations, gets out of the joint just in time to be drafted into a manic hunt for a lost goldmaking process invented by Leonardo daVinci.  The existence of this fantastic method pushes the film into the realm of the marvelous: without that, HAWK would be "uncanny," based on its preponderance of heroes and villains using all sorts of strange devices (my favorite being a staid-looking butler-henchman who wears huge blades up his shirtsleeves).

One can hardly complain at how episodic the film is, as it's clearly designed to be a series of slapstick gags and stunts, ranging from the mildly amusing to the tiresome.  What kills it is that most of the actors mug atrociously, no matter how high they rate on the "respected actor" scale: Danny Aiello is just as bad as Sandra Bernhard.  There's some amusement value at seeing David Caruso tricked up to be one of the main villain's henchmen, sporting the name "Kit Kat," but it wears off quickly.  The only one who brings some degree of conviction to a role is Andie MacDowell in the lead female role as Sister Anna.  Playing a sort of commando-nun who reports directly to the Vatican, she's conflicted by her attraction to daredevil burglar Hudson Hawk, and he's at least slightly discomfited by the prospect of macking on a Bride of Christ.  Still, no one will be surprised if I reveal that God loses the girl in this movie.

In terms of Fryean mythos, the plot strongly resembles that of many tongue-in-cheek adventure-tales, but the general "Three Stooges" feel of HAWK edges the film into the domain of the combative comedy.

Posted by Gene Phillips at 4:32 PM
Email ThisBlogThis!Share to TwitterShare to FacebookShare to Pinterest
Labels: combative comedies, the marvelous