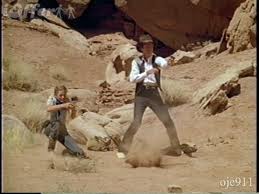 
WANDA NEVADA would make an interesting pairing with 1969's MACKENNA'S GOLD, as both center on an eccentric group of characters seeking gold in a mysterious canyon guarded by an obscure Indian curse.  Of the two, MACKENNA'S GOLD is more adventurous (some would say pretentious), while WANDA keeps to a small cast of characters, centering on the "romantic buddies" relationship of Beaudray, a 38-year-old gambler (Peter Fonda), and Wanda, the 13-year-old girl he wins in a poker game (Brooke Shields).  While Beaudray's trying to figure out if there's any way he can recoup his losses-- including Wanda's upkeep-- Wanda (who takes on the surname "Nevada" with the idea of breaking into show biz) witnesses the murder of an old prospector by two claim-jumpers.
Beaudray and Wanda pursue the dead prospector's strike-- in the Grand Canyon, no less-- and the claim-jumpers follow them.  All four soon learn that the gold is guarded by a mysterious spirit whom Wanda dubs "the Apache ghost."

Whereas the spirits in MACKENNA'S GOLD are questionable, the Apache ghost is seen many times as it deals out calamity and death, particularly with arrows that glow when they first hit someone but seem to become ordinary arrows thereafter.  At one point the ghost even blows up boulders with an arrow-shot.  The ghost's motivations-- presumably grounded in a hatred for the sins of the white men-- never get any real attention, and often the spirit acts like a "deus ex machina" for the script, killing whoever the writer wants killed.

WANDA inevitably drifts into some overt "Lolita" territory, though initially Beaudray shows no lustful interest in Wanda and treats her as no more than a kid, despite the famous Shields underage-glamor, which had put her on the star-map in 1978's PRETTY BABY.   To this film's credit the script doesn't eroticize Wanda or forget that she's a kid, but the romantic arc isn't resisted very hard.  During their prospecting in the canyon Beaudray and Wanda have not one but two improbable encounters with strangers who threaten the lead player's potential union.  One stranger is an old roue who covets Wanda openly, played by Severn Darden and given the Pyncheonesque name of "Merlin Bitterstix." However, Wanda rejects poor Merlin moments before he's killed by the apache ghost.  Even more improbably, Beaudray and Wanda subsequently run into a lady photographer (Fiona Lewis), whose age-appropriate bones Beaudray tries to jump.  The older-woman rival bows out gracefully at seeing the connection between the two partners.

I'm tempted to make a symbolic connection between the two goals Beaudray manages to accomplish by film's end: successfully making a "Big Score" in terms of getting a lot of money, and also successfully scoring with a virgin girl.  But I confess the script doesn't explore any such symbolism and takes a rather dismal matter-of-fact attitude toward all the wild circumstances.

WANDA was Peter Fonda's last directorial effort, following the naturalistic western THE HIRED HAND and the SF-thriller IDAHO TRANSFER.  Fonda's famous father Henry appears for a few minutes in a minor role, but for all the impact he has, he might as well have skipped the role.