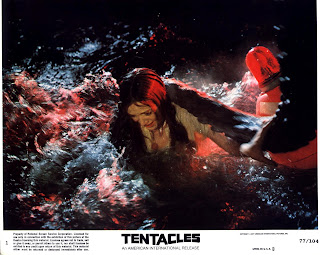 At the end of my WANDA NEVADA review, I mentioned that Henry Fonda would've done better to have passed on his minor role therein.  For the 1977 JAWS-ripoff TENTACLES, I might have given the same advice not just to Henry Fonda (who plays the oppositional butthead-role essayed by Murray Hamilton in JAWS), but to pretty much everyone in the cast.

With one exception.  While most of the other actors-- including such luminaries as Shelley Winters and John Huston-- are given the same colorless, drab dialogue that Henry Fonda, Bo Hopkins gets one so-bad-it's-good speech that's made the picture less than a complete waste of time-- a speech addressed to two killer whales whom Bo wants to help against a marauding octopus:

"I guess you know now why I brought you here... I wanted to tell ya more about it, but there've been many people that died... I've lost a loved one. I need your help more now than ever. I remember the times when I was training ya - people used to call you killers. They used ta call me that on the streets. It doesn't mean nothing. You have more, more love in your heart, more affection than any human being I ever met. But now I... I can't ask anybody else, so I'm asking you to help me kill this octopus. I hope you understand that. I know I'm in your environment. I don't want it this way, but if I release ya and you go away, I want ya to know I'll understand. All right, enough said. I gotta go now. If you feel anything - you talk to me. Make some noises. I know people'll think we're crazy. Maybe we are... Maybe we are..."

In addition, there's one moderately affecting moment when a young woman is floundering in the sea, trying to pull herself up on a red-glowing buoy, just before the killer octopus attacks.  It's nothing special, but it's a little less tedious than everything else.

Director Ovidio G. Assonitis was known best for duties as a producer.  Oddly his best film is probably yet another JAWS ripoff filmed four years later: PIRAHNA II: THE SPAWNING, on which he allegedly performed uncredited directing duties alongside a somewhat better-known fellow named James Cameron.


Posted by Gene Phillips at 3:43 PM
Email ThisBlogThis!Share to TwitterShare to FacebookShare to Pinterest
Labels: astounding animals (u), the uncanny