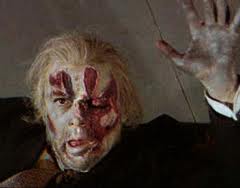 “You think you can become a great siniger without suffering?”—the 1962 Phantom to Christine.

The third major adaptation of Gaston Leroux’s most famous work only bears one or two similarities with either the novel or the 1925 Chaney version.  From the novel scripter Anthony Hinds and director Terence Fisher took an incident involving a hanged man and the character of a ratcatcher, both used for shock-value scenes.  In contrast to the 1943 Universal version—of which the ’62 film is substantially a remake—the story places a bit more emphasis placed upon the notion of Christine being musically tutored by the Phantom, which appears both in the novel and the original 1925 film.  However, the way that Fisher’s film does so pursues a course almost diametrically opposed to either the Julian or Lubin adaptations.


I commented earlier that Claude Rains’ Phantom is less majestically evil than the Lon Chaney version.  However, the 1943 Erique, despite having his fatherly motivations re-written, still emerges as an interesting though not consistent character.  Hammer’s Phantom, though more grotty to look at than the 1943 version, is a far weaker conception. Despite the rewrites of the Rains character, one could still imagine that he had become fascinated with Christine as a “daughter he never had.”  The essence of the Leroux story lies in the “Beauty and the Beast” relationship of Christine and the Phantom, and Hinds’ script never provides one scene that gives this Phantom a reason for fixating on Christine.  And that’s saying nothing about how badly it treats Christine.


The film once more takes place in the Paris Opera-House, this time at the staging of an opera written by Lord D’Arcy (Michael Gough).  A younger man, Harry Hunter, manages the opera’s production, while ingénue Christine makes a favorable impression on D’Arcy—so much so that within the film’s first thirty minutes he attempts to get her to come to his studio for “lessons.”  Christine’s one real moment of spirit comes at this point, when she inveigles Hunter into helping her win free of the old roué.  In retaliation D’Arcy fires both of them from the production.


Interweaving with this romance-plotline, albeit tenuously, is the revelation that the Opera-House possesses its own Phantom (Herbert Lom).  It’s not very clear how long he has been there, though in contrast to the 1943 film, it must be long enough to have created a superstition that no one attends the opera in “the Phantom’s box”—a detail fleshed out more in the novel.  One of the stage-hands is hanged to death, making for a shocking opening.  It’s not clear why he was killed, though it’s suggested that this wasn’t the act of the Phantom himself, but that of his mute servant. A little later the mute goes berserk and kills the opera-house’s ratcatcher, apparently to establish that the mute is a loose cannon who kills for the fun of it.  But the upshot of this plotline pays more attention to the mute than to the Phantom’s reasons for becoming interested in Christine—apparently after seeing her on stage for an extremely short period.


This Phantom does speak to Christine through the wall in her dressing-room. The character, as in the 1943 film, reacts with disbelief and shows no interest in being tutored by the opera’s resident spectre; indeed, she even reveals the anomaly to Hunter, who begins “hunting” out the secret of the Phantom.  By dumb luck Hunter talks to Christine’s landlady and learns the story of a “Professor Petrie,” who suffered grievous wounds in a fire at Lord D’Arcy’s publisher, and then vanished from sight.


While Hunter plays Sherlock Holmes, Christine’s choice is taken from her.  Apparently at the Phantom’s command, the mute assaults Christine, knocks her out and carries her, not at all romantically, down into the watery catacombs beneath the opera-house.  Even Lord D’Arcy, rotter though he was, at least gave her a choice of sorts, even if he sacked her thereafter.  The Phantom insists that Christine accept his singing-lessons, and the terrified ingénue obeys.  In one brief scene, the Phantom slaps her a couple of times for getting her lessons wrong.  Whereas the Rains Phantom was credibly fascinated with the singer, Lom’s Phantom, with his above-quoted line about suffering, seems more concerned with using Christine as a vehicle for his frustrations.


Hunter finds his way down to the catacombs.  The mute attacks Hunter, but Hunter beats him down and bursts in on the singing-lessons.  As this Phantom appears to be no threat to anyone, Hunter takes the time to explain how he ferreted out his identity as Professor Petrie.  A flashback fills in the details, about how D’Arcy cheated the penurious Petrie out of all of his musical compositions.  Petrie, attempting to sabotage D’Arcy’s publisher, became injured and disfigured.  He fell into the river, which carried him to the catacombs, where the mute found him and cared for him.


Hunter and Christine conveniently forget about the earlier murders and decide that, because the Phantom is dying, they will give him one last pleasure, as Christine performs the lead role in the opera that D’Arcy stole from Petrie. Strangely, on the night of the perfomance the Phantom confronts the contemptible D’Arcy, but contents himself with frightening the nasty lord away by revealing his hideously scarred features.  Many horror-fans have regretted that the thieving D’Arcy wasn’t killed at this opportune moment, but it seems to have been very important to Hinds and Fisher not to have this Phantom soil his own hands with killing.


That said, the Phantom indirectly brings about his own death thanks to having helped unleash the murderous mute, who is sort of a “dwarf soul” to his master, not unlike the relationship of the hunchback Frtiz to James Whales’ Doctor Frankenstein. Following Christine's performance of the opera, she comes back on stage for her bows, while the Phantom watches from his box and the mute watches from the rafters.  A stage-hand sees the mute and gives chase, which leads to the famed falling-chandelier scene.  The Phantom unmasks himself (!) and leaps down to push Christine out of the way.  He loses his life, essentially having found a pyrrhic way to "steal the spotlight."  Even the mute watches tearfully, with no indication that he, any more than D'Arcy, will be brought to justice.


Despite some impressively mounted sequences of a very bad fake opera, and a more horrific re-interpretation of the 1943 Phantom’s appearance, this PHANTOM lacks any of the romance-elements of the earlier works.  It remains principally a melodrama with a touch of resentment toward the upper classes, but concerns itself largely with the passion and suffering of men, in which one woman just happens to get embroiled.

Posted by Gene Phillips at 3:27 PM
Email ThisBlogThis!Share to TwitterShare to FacebookShare to Pinterest
Labels: bizarre crimes (u), freakish flesh (u), outre outfits (u), perilous psychos (u), phantasmal figurations (u), the uncanny