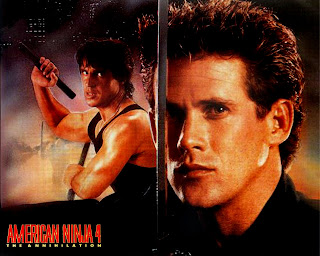 
Though I've touched on a couple of "uncanny" martial arts films here, I believe this is my first "ninja" film.  This one just happened to come on regular TV, so I re-watched it.

I'm not sure that I could have picked a worse exemplar of the genre had I been trying.  I remember the first "American Ninja" film, with Michael Dudikoff in the lead role, as moderately entertaining, and the next two sequels as adequate time-killers.  But there was a reason that I didn't remember anything about this one, save that it was the first in the series to team up Dudikoff (who made the first two films) with David Bradley, a real martial artist who took over from Dudikoff when the actor didn't want to do film #3 in the series.  Presumably Dudikoff was brought back to the fold with the hope of flogging the series' profitability, though only one more entry appeared, with Bradley as the sole star again

All the 1980s cliches are on display here.  A dangerous madman, allied to an Arab fanatic and an Irish (?) military commander, has put together a mountaintop fortress swarming with fully costumed ninjas.  Because the madman (one of the least interesting villains I've seen in American action-films) has perfected a small nuclear device, the American military sends in a task force.  The task force is captured, and the military men discuss the possibility of just bombing the whole shebang from the skies.  But the officers really really want their men back (shades of every "Missing in Action" film ever made).  So they send in Sean Davidson (Bradley) and some aides.  They get captured too.  So they send for the original American Ninja, who single-handedly infiltrates the fortress, frees the good guys and decimates all the villains, including one big-ass villain comically billed as the "Super Ninja."

Both of the main heroes don ninja costumes, so they fit the "outre outfits" trope, though if they didn't, I'd probably consider that the ninja army also fulfilled this trope in the "uncanny" mode, though I have seen both naturalistic and marvelous ninja films.

Dudikoff (an actor who can't really do martial arts) and Bradley have a brief fight, but "Bradley" turns out to be an Oriental guy who has donned a Bradley disguise for no conceivable reason.  One may speculate that even though the fight was fake, David Bradley might have relished the chance to show how much better his fake kung-fu was in comparison to the actor's.

Posted by Gene Phillips at 1:53 PM
Email ThisBlogThis!Share to TwitterShare to FacebookShare to Pinterest
Labels: combative adventures, outre outfits (u), the uncanny