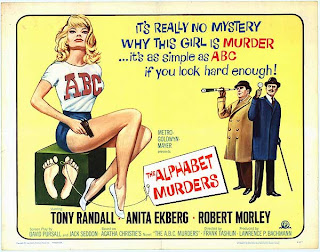 "This is London. Nothing will happen."-- Tony Randall's Poirot in ALPHABET MURDERS


This is the first "naturalistic phenomena" film I've reviewed since changing my blog-name and my term for this type of phenomenality, formerly called "atypical." The above quote, though, catches some of the problems for this type of film. The line is spoken by Randall's Poirot directly to the members of the audience as he endeavors to convince them not to follow him, implying that everything in London is ordinary; "typical." Of course, as the educated audience-member will anticipate, everything that happens in this Frank Tashlin-directed comedy-mystery is thoroughly "atypical." Next to ALPHABET, THE THIN MAN is a kitchen-sink drama. Still, here as with most mysteries, the important aspect of their phenomenality is that they're dominantly naturalistic. ALPHABET is no exception: no matter how oddball the occurences in the film, they're explicable within a naturalistic framework-- except for Poirot's brief address to the audience, which I'll address later.

Poirot's first contact with the burgeoning ABC murders-- which begin with a man having the initials A.A., and then proceed to other alphabetically-alliterative names-- is the most memorable scene in the film. As Poirot relaxes in a steambath, perilous psycho Anita Ekberg enters the room and attempts to strangle him while identifying herself as "ABC" and pleading for his help. A steambath-attendant intervenes, only to get (very unrealistically) judo-tossed to the floor by crazy Ekberg. She flees when Poirot's aide Hastings (Robert Morley) chases her. Soon Poirot and Hastings are attempting to trail the apparent madwoman, while more deaths take place, given a rather "outre" touch through Ekberg's use of an air gun that fires poison darts. Eventually Poirot identifies the woman as one Amanda Beatrice Cross, whose name, her psychologist asserts, has led to her becoming obsessed with the alphabet. But of course no mystery worthy of its genre would really allow the crime to be solved as easily as, well, ABC...

I haven't read the Agatha Christie "Alphabet Murders" in many years. I can say that this film substantially duplicates the main plot-idea of the book, but certainly Tashlin's film carries none of Christie's boundless fascination with puzzles for their own sake. In keeping with Tashlin's career as a former cartoon-director, the formal aspects of the narrative exist merely to generate comic episodes (Hastings trapped in a car-trunk with a pretty girl, Poirot at a bowling-alley, trying to dodge rolling balls in order to retrieve an item from the lanes). If I hadn't known that ALPHABET debuted roughly a year before the first season of the BATMAN teleseries, I might have thought that Tashlin was attempting to produce a "camp" comedy in reaction to that cultural fad, in that the "comic" scenes are too arch to be funny. Tashlin had scored a critical hit in 1957, teaming up Randall with Jayne Mansfield in the comparatively sophisticated comedy WILL SUCCESS SPOIL ROCK HUNTER? But ALPHABET has more of the feel of the many Jerry Lewis comedies Tashlin directed before and after HUNTER-- except that some of those were funny. Whatever comic talents Tony Randall possessed, he was not a physical comic like Lewis, and scenes like the one in the bowling-alley fall embarrasingly flat.

In addition, while Randall earned modest plaudits playing a variety of somewhat-jokey personas in George Pal's SEVEN FACES OF DOCTOR LAO the previous year, here his attempt to do a jokey version of Christie's famed "Belgie" detective proves excrutiating even to a viewer like myself, less than a hardcore Christie fan. In addition to trying to leech off of LAO, the film attempts to continue the construction of Tony Randall As Hollywood Leading Man-- a construction would founder not long after ALPHABET. More, the producers of ALPHABET surely hoped that if successful they might launch a profitable series of Poirot films in emulation of the successful "Miss Marple" films. But the closest ALPHABET ever gets to that success is a cameo-scene in which Margaret Rutherford (in character as Marple) passes Poirot in the street and the two Christie character give each other the fish-eye. ALPHABET, in the end, has no identity of its own, being too much of a rag-bag of conflicting influences.

Except for Robert Morley, who gives his usual performance of dour Britishness, the other actors don't come off any better. Ekberg is particularly weak; her fleeting scenes never convey any madness, though she may have wondered to herself how she could have been crazy enough to have agreed to do the picture.

The only time the film flirts with the metaphenomenal would be the "actor's aside" I mentioned earlier, where Poirot speaks to the audience. There are films where such an intrusion can be significant enough to put the film in the "uncanny" category, as I touched on with my review of 1937's ALI BABA GOES TO TOWN. But here it's about as incidental as similar actors' asides in Shakespeare plays.
Posted by Gene Phillips at 2:20 PM
Email ThisBlogThis!Share to TwitterShare to FacebookShare to Pinterest
Labels: delirious dreams and fallacious figments (n), diabolical devices (n), perilous psychos (n), the naturalistic