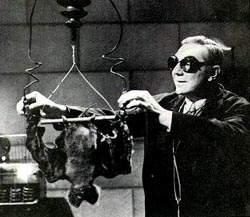 
THE DEVIL BAT marks poverty-row studio PRC's first attempt to enter the horror-picture business, as well as the first of several microbudgeted fright-films for Bela Lugosi. As he would in various other poverty flicks, Lugosi plays a mad scientist with a particular mad-on for the mundane world that has rejected his outre theories.

One of the odd aspects of the film is that in its opening it's at pains to tell viewers that Lugosi's character, small-town chemist Dr. Paul Carruthers, is universally liked by everyone in town. Presumably this was to downplay Lugosi as the "suspicious foreigner" figure he so often played. Frankly, Carruthers doesn't seem especially likeable, though the actor was capable of projecting charming qualities.

Carruthers nurses a long-concealed grievance: long ago he devised formulae for shaving-lotions for a company in which he held membership. He opted to let his partners buy him out for a cash settlement, and then to his dismay saw them go on to become millionaires from his invention. Carruthers finally decides that he will take vengeance with a unique method. Using advanced electrical treatments, he causes common bats to grow about three times their normal size, and then trains them to attack anything with a certain scent. That scent can only be found in a new brand of shaving-lotion that Carruthers distributes only to the men who bought him out. As soon as the intended victims slap the lotion on their throats, they get unerring visits from the giant bats ready to tear out their jugular veins. Eventually, however, intrepid reporter Dave O'Brien (two years ahead of his becoming "Captain Midnight" in a serial) uncovers Carruthers' scheme and turns the tables on the mad bat-breeder.

One surprising facet of DEVIL BAT is that Carruthers manages to keep his emnity for his former partners under wraps over the course of many years, but presumably the script needed him to do so. Had any of the victims known of his hostility, surely none of them would have donned the deadly cream. Moreover, none of the magnates consider that they cheated Carruthers, which would be the more expected trope of economic exploitation. One of them even reflects, more unthinkingly than callously, that if only Carruthers hadn't let them buy him out, he'd be as rich as any of them. The script thus places the responsibility for the scientist's past failure squarely on his own shoulders. Thus his long-cherished grievances seem to have less of the grandeur of a Promethean challenge to the gods, as seen in Lugosi's Dr. Mirakle in MURDERS IN THE RUE MORGUE, and more like the repressed anger of Uriah Heep from Dickens' DAVID COPPERFIELD. This bit of psychology is the only reason I give the film a "fair" rating in terms of mythicity.

Naturally Lugosi's performance is the star attraction here, but O'Brien is one of the few cast-members who proves memorable. Jean Yarbrough's direction on his first horror-picture-- of which he would make a scattered few during his career-- is efficient, but there's not much he can do to eliminate the comic effect of the papier-mache bats. Yet though one imdb review called DEVIL BAT a "comedy-horror," the comic elements aren't prominent, and are actually kept in control-- which is more than one can say of many other horror-films that included wisecracking reporters in the mix.

One odd metatextual touch: about halfway through the picture, after reporter O'Brien kills one of the bats with a handgun, a subsequent newspaper headline is presented to viewers reading, "REPORTER KILLS DEVIL BAT." This is fairly risible in itself, but not as funny as the only other two words discernible to DVD viewers on the screen: "GIRLS" and "AMERICANISM."
Posted by Gene Phillips at 3:15 PM
Email ThisBlogThis!Share to TwitterShare to FacebookShare to Pinterest
Labels: the marvelous