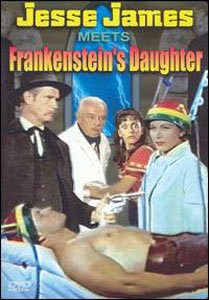 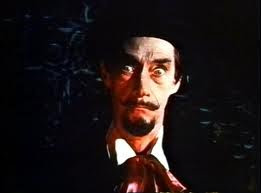 These two quickies, directed back-to-back by legendary William "One-Shot" Beaudine, ought to be pretty much the same on the quality level. Surprisingly, though they use the same formula-- combining western thrills with gothic boogeymen-- one does a much better job with the material than the other, though even the "good" one is only a little better than average.

Anyone with a nickname like "One-Shot" might be expected to appreciate westerns, in which a "fast draw" is so important. But from a glance at Beaudine's imdb credits, I'm surprised to see he has almost no "straight" westerns on his resume, though he did do a few serious (or allegedly serious) horror-films. Given that Beaudine was for many years director-in-residence for the long-running "Bowery Boys" series-franchise, perhaps BILLY and JESSE should be seen as more in the tradition of "Bowery"-style spoofs of straight genres, like Beaudine's "Bowery Buckaroos."

The two films were released back-to-back as their own internally-consistent double bill, and scripts for both were credited to a Carl Hittleman, who unlike Beaudine did have a number of "straight" westerns on his resume. Imdb credits a second writer on BILLY, so I'm tempted to wonder if the extra collaborator made a difference.

JESSE, which is listed first in imdb, is clearly the lesser effort. Prior to the introduction of the western hero, the audience meets two European fugitives who have traveled to the West to escape justice: Doctor Maria Frankenstein and her brother Rudolf. Maria, like all Frankensteins, wishes to prove she can build a better man than God could, but her experiments, culled from the local Mexican population, have all died off. Later Maria will learn that her timid brother Rudolf has been poisoning the subjects to prevent her success, but at the outset she decides she's been failing because she needs a "giant" of a man on which to experiment.

As it happens, Jesse James, on the run from the law, happens to have a really big fellow named "Hank" riding with him. Circumstances cause Hank to be wounded near the Hacienda of Frankenstein (good a name for it as any) and Jesse unwittingly lets the strange lady doctor work on his friend. However, a local Mexican girl, name of Juanita, informs Jesse that her brother mysteriously disappeared while in the good doctor's care. Before Jesse can take action, Maria "fixes" Hank by giving him a brain transplant and christening him "Igor." In time-tested tradition Igor ends up turning on his new "mom" and almost kills Jesse before Juanita shoots the not-too-super monster to death.

I tried to find something good in this farrago, but the plot crawls along like a wounded crab, and the acting and stuntwork wasn't even as competent as your basic "Roy Rogers" outing. John Lupton seems to be asleep during his performance as Jesse, though he's supposedly so attractive that both Juanita and Maria (from the Italian side of the Frankenstein family?) fall in love with him. At the climax Jesse faces off against berserk Igor, brandishing his six-gun, but not only does he not manage to shoot when Igor attacks, the actor practically tosses his gun away during the struggle, so that moments later Juanita will be able to pick it up.

I suppose the Campbellian function here has to be "sociological" in the theme both JESSE and BILLY share is "Never trust a foreigner." However, for some reason BILLY's encounter with a European vampire works better, perhaps because the vampire resembles the "dude" figure seen in many westerns.

Of course top-billed John Carradine's performance as a sagebrush Dracula most conspicuously lifts this film out of the doldrums, and even the less noteworthy performers (Chuck Courtney as Billy; Melanie Plowman as his girl Betty) are as ships lifted by a rising tide in his presence. In addition, though Carradine's look is certainly borrowed from his Universal "Dracula" appearances, BILLY takes advantage of color photography to give this Dracula a more decidedly Satanic look.

The plot is comparatively efficient. Dracula, for some reason sojourning out west, encounters a stagecoach and learns from one occupant of young Betty. From a glance at her picture he immediately wants her, so he causes the deaths of everyone in the 'coach and poses as the young woman's uncle, assuming authority on the family ranch. Fortunately Billy, not very wise in the way of Euro-vamps, receives some advice from a Middle European emigre, full of advice on wolfsbane-- and even after Dracula gets rid of the emigre, the local doctor stands in for Van Helsing, advising Billy to stake the vamp to death with a "spike"-- oddly enough, a metal scalpel. It would have been much more in the western tradition to use a railroad spike, but you can't have everything.

There's a cheap but still creepy scene of Dracula seducing Betty in the night, and a curious ending: after Dracula is spiked in a cave, a bat flies out of the cavemouth and perishes. Given that Dracula's body is still on the cave-floor, did the script conceive this as the vampire's damned soul, perishing like his body? Food for (a little) thought...
Posted by Gene Phillips at 2:51 PM
Email ThisBlogThis!Share to TwitterShare to FacebookShare to Pinterest
Labels: the marvelous