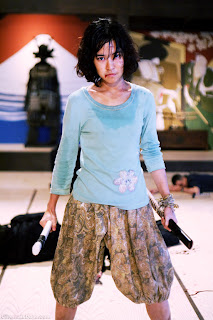 
CHOCOLATE is one of those kung-fu films that just totters on the brink between naturalistic and uncanny worlds, but ends up falling into the latter category. On balance the main thrust of the story involves an ordinary citizen taking up kung-fu arms against a corrupt criminal element exploiting society, much after the fashion of Bruce Lee's 1971 classic FISTS OF FURY.

All the kung-fu stunts performed by the heroine "Zen" (Thai actress JeeJa Yanin) are, while only barely believable, still within the framework of a naturalistic phenomenality. If the film had shown Zen rigorously training to gain these superlative fighting-skills, CHOCOLATE wouldn't fall into any metaphenomenal category. However, what tips the balance is that Zen's skills result from her being autistic, which apparently functions to heighten her reflexes and her ability to imitate any kung-fu move she sees (especially in-- what else?-- old-school kung-fu films). Whereas a more realistic kung-fu film may depict the hero honing his fight-routines over months of hard training, CHOCOLATE shows perhaps ten seconds of Zen kicking a stationary object to harden herself for the fights ahead.

I'm not downgrading the film for not depicting either autism or kung-fu training in more realistic terms. In essence, for CHOCOLATE autism functions to grant the heroic figure a means by which she can act more quickly than most ordinary people can, due to the normal reservations of civilized living. This is why I label the film as "cosmological," which in Campbellian terms applies to all aspects of the physical world that can be rendered into mythic discourse. There's only a brief discussion in the film of the strange psycho-physical properties that make Zen the way she is. In essence, though, her unique mentality is a gift that might as well be given to her by the gods of war, or (to cite a parallel to Hong Kong martial films) by the power of inebriation, as seen in the various "drunk fu" subgenre films.

There's no psychological complexity here. Once Zen finds out that various Thai gangsters owe money to her mother (who desperately needs expensive medical treatments), she goes after them with singleminded purpose and flying fists and feet. Only once does her autism hamper her, in that she has an irrational fear of flies. However, even when this weakness threatens to undermine her performance in one fight-scene, Zen simply shakes off her fear like a traditional hero and kicks major booty anyway.
Posted by Gene Phillips at 10:41 AM
Email ThisBlogThis!Share to TwitterShare to FacebookShare to Pinterest
Labels: combative adventures, superlative skills (u), the uncanny