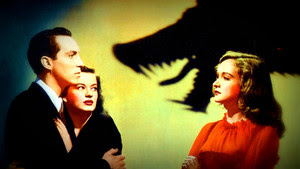 
On average I've thought that horror-films that stressed magic over science tended to show greater symbolic complexity, or mythicity. However, CRY OF THE WEREWOLF goes against this dictum.

Long-time journeyman Henry Levin directed a few other films with minor horror-elements, but this is his only mainstream horror-flick, as well as his first credit in the director's chair. Levin shows precious little facility with the atmosphere necessary for horror, as the direction of CRY proceeds from setup to setup with such brisk efficiency that I almost found myself nostaglic for the works of William Beaudine.

The story is functional but uninspiring. Somewhere in Eastern Europe, Dr. Charles Morris, curator of a museum with a strong interest in gypsy lore, does some research into the history of a famous gypsy leader, Marie LaTour, who was reputedly to have been a werewolf. When he learns that Marie birthed a still-living daughter, Celeste, the discovery costs the doctor his life, as Celeste-- also possessed of the lycanthropic power-- wants no one to know of her unfortunate lineage. The late Charles' son Bob and his girlfriend Elsa continue to investigate the mystery, at which point Celeste begins to take an interest in Bob Morris. One might expect that Elsa might be Celeste's next target. Instead, in the film's one original touch, Celeste exerts some hypnotic control over Elsa, claiming that she wants Elsa to be her "sister werewolf." One wonders if she had a threesome in mind. However, for once the investigating police play a substantial role in the climax, breaking in and killing the werewolf (a prosaic-looking dog or wolf) with ordinary bullets.

CRY is pretty obviously a derivative job, with the gypsy elements culled from Waggner's 1941 WOLF MAN and its one somewhat scary sequence heavily indebted to Tourneur's 1942 CAT PEOPLE. But the scriptwriters merely move the elements of these very different movies around like checkers, and end up playing a pretty poor game for all that.

The sociological function here is the clash of modern ways with those of the gypsies, but the film, despite noting that culture's matriarchal structure, never evokes anything interesting about gypsy culture.
Posted by Gene Phillips at 2:47 PM
Email ThisBlogThis!Share to TwitterShare to FacebookShare to Pinterest
Labels: the marvelous