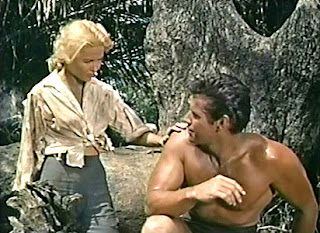 Here are two Tarzan films which, though directed sequentially, seem like night and day in terms of quality.

TARZAN'S FIGHT FOR LIFE, the second Tarzan feature-film directed by Bruce Humberstone (who also worked on the abortive Tarzan TV-pilots), lacks even the mild entertainment of his previous entry, TARZAN AND THE LOST SAFARI. Whereas early MGM Tarzans often posited a mix of good and bad white explorers with whom Tarzan had to deal, in FIGHT there are only good white people-- mostly the members of a hospital in Africa. Their attempt to bring modern medicine to primitive Africa are thwarted by tribal superstitions, particularly those of a witch-doctor who doesn't appreciate the medical competition. As a critic I'm frequently impatient with other critics who attempt to read entertainment in terms of political postures. But in FIGHT I can't see much of a story beyond a paternalistic attempt to depict European/American culture as intrinsically superior to that of tribal black Africans. Tarzan has to sort out the witch doctor, while in a tedious subplot Jane (who's back for one more outing as Mrs. Tarzan) is briefly stricken with appendicitis. There's an attempt to introduce a new "Boy" with the name "Tartu," but he never appeared again. Ironically, while Jane would disappear from later Tarzan features a few of them did make some attempt to bring versions of "Boy" back into the picture.

TARZAN'S GREATEST ADVENTURE, however, proved a different kettle of pirahna. It was the first color Tarzan film shot on location, and director John Guillermin did yeoman service to make this flick one of, if not the absolute greatest, Tarzan adventures. Gullermin and his cameramen rarely provide a dull or static set-up, and ample closeups insure that all the actors-- not just Gordon Scott, who finally gets to speak regular English-- get strong support.

Tarzan is still a "jungle cop" here, but this time the script centers his need to protect his jungle in a personal code of ethics. A group of white raiders masquerading as black tribesmen kill several people to obtain a cache of nitroglycerine, planning to go upriver by boat to unearth a lost diamond mine. Tarzan goes after the raiders, comprised of three henchmen (one played by the then-unknown Sean Connery), the leader's girlfriend (Scilla Gabel), and the leader, a brutal hunter with whom Tarzan has crossed paths before, the ruthless Slade (Anthony Quayle).

To further complicate Tarzan's mission, he has a chance encounter with young aviatrix Angie (Sara Shane), who is loosely implied to be a high-class call girl, or at least some sort of 1950s "swinger." Following that first encounter, Angie takes a shine to the taciturn ape-man and, knowing that he plans to follow the raiders by canoe, uses her plane to locate Tarzan's canoe. She foolishly buzzes him, probably hoping to get his goat, but the plane dies and crashes. Tarzan, not willing to give up his pursuit, takes Angie with him, which seems to be what she wants. Angie is in many ways a stand-in for the member of the audience who fantasizes not about being Tarzan but about fighting alongside Tarzan. Truth to tell, Angie never renders the ape-man all that much aid, but she does become a stronger person for having joined his quest and there's a brief suggestion of a romantic interlude between them. (Jane, as noted above, is no longer referenced.)

Two of Slade's henchmen-- Sean Connery and the man hired to drive the boat-- are the first evildoers to meet grisly ends, though only one of these is attributable to Tarzan. The third henchman, the slimy German Kruger (Niall MacGinnis), nourishes a desire to double-cross the formidable Slade, hoping to get the ape-man to do his dirty work. Girlfriend Toni, however, becomes increasingly stressed by the violence of Slade's endeavors, and at one point reviles Slade for being consumed with the love of death. (Her antipathy for violence isn't consistent: late in the picture the villains capture Angie and Toni offers to torture Angie for information.)

Slade, though, is the outstanding evil personality. After the script has hinted at the earlier acquaintance of Tarzan and Slade, Tarzan finally tells Angie that Slade was responsible for the death of three men during an elephant-hunt. This version of Tarzan makes no bones that he would have killed Slade had "man's law" not vindicated him; thus Slade's new crime gives Tarzan the chance to redress an old wound. For Slade, Tarzan is the Worthy Opponent he's always desired; Toni even claims to be "jealous" of the way Slade watches for signs of his valued enemy. Toni, incidentally, perishes falling into a trap Slade sets for Tarzan, indicating that maybe she should have sought a somewhat less obsessed man-friend.

Finally, though all of the action-scenes in GREATEST prove enjoyable, the final battle between muscular Scott and bearlike Quayle remains one of cinema's best one-on-one battles, again using natural settings to fine effect. Following Tarzan's inevitable victory, the story ends on a rather bittersweet note as he contemplates the leavetaking of Angie.

In terms of fantasy-cinema, this is certainly Guillerman's tour de force, making one wonder where his talents had flown when he directed works like KING KONG (1976) and SHEENA (1984).
Posted by Gene Phillips at 3:40 PM
Email ThisBlogThis!Share to TwitterShare to FacebookShare to Pinterest
Labels: combative adventures, outre outfits (u), superlative skills (u), the uncanny