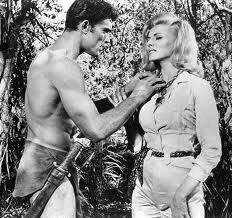 I wasn't all that taken with Jock Mahoney's two Tarzan performances, but he projected a little more gravitas in the role of the ape-man than his successor Mike Henry. Henry has a physique almost as impressive as that of Gordon Scott, but he's only moderately skilled as an actor.

Still, he does fit the mold of the producers' 1960s concept of "Tarzan-as-globetrotting-James-Bondish-troubleshooter." Many reviewers have commented on the opening scene, showing Tarzan wearing a suit and tie while moving amid regular humanity, but the books not infrequently have the character doing the same thing, and even Johnny Weissmuller forced himself to go "New York native" in 1942. The sight of Tarzan wielding guns or firing a tank is a little less faithful to the concept, though. Still, the film's first violent scene-- in which the ape-man defeats a Mexican assassin with a giant advertising prop, a huge Coke-bottle-- probably would've had Jean-Luc Godard rolling in the aisles.

Tarzan's a fairly simplistic figure this time out, but at least there's a fair level of myth-symbolism in the "peace vs. war" scenario that almost seems a commentary on the previous film in the series, TARZANS' THREE CHALLENGES. In CHALLENGES Tarzan functioned as an outsider-hero who, in order to maintain a peace-loving regime in Thailand, had to defeat an ambitious Thai warlord. In VALLEY Tarzan once more functions as the outsider-hero-- this time journeying to Mexico to defend a lost city of Aztecs. These modern-day Aztecs have so thoroughly renounced their ancestors' violence that Tarzan has to do their fighting for them, though by picture's end they're a little more persuaded that "violence is sometimes necessary." But in contrast to CHALLENGES, VALLEY returns to the fertile symbolic grounds of the evil invading Europeans who started out as ivory-hunters back in TARZAN THE APE MAN (1932).

David Opatoshu's head villain Vinero provides one of Tarzan's more cerebral villains, though he's accompanied by considerable muscle too: a small army of tank-driving thugs and a hulking bodyguard (Don Megowan) with whom Tarzan grapples in the climactic scenes. Vinero's use of tanks and heavy artillery against powerless natives can't help but evoke colonial incursions, and his goal-- to have the Aztecs pile a mountain of gold at his feet-- evokes the story of the "room full of gold" Pizarro demanded of the Incan ruler Atahualpa. In addition, he comes up with one of the most sadistic maneuvers of any Tarzan villain. When his ex-girlfriend Sophia (Nancy Kovack) ticks Vinero off by questioning his sanity, he has a necklace welded around her neck and a bomb planted in a pendant at Sophia's neck. Without question the ensuing scene-- in which Tarzan can only remove the necklace by cautiously breaking the metal chain by main strength, while trying not to set off the explosive-- is easily the scene with the greatest tension, to say nothing of the sexy appeal of the danger shared by Sophia and Tarzan. Unfortunately, this Tarzan isn't allowed even as much implied hot-babe action as Gordon Scott apparently got in GREATEST ADVENTURE; once he's saved Sophia, she doesn't do much of anything but play mother-hen to Aztec kid Ramel (Manuel Padilla Jr, who would play a similar role as "Jai" on the 1960s Tarzan teleseries). Happily, Vinero meets the fate his predecessor Pizarro also deserved: getting buried alive in the gold he desired.

Director Robert Day's work is as sterling as usual Screenwriter Claire Huffaker's script, while not innovative, is solid, which is all the more remarkable in that almost everything else she ever wrote for films was in the genre of the western. .
Posted by Gene Phillips at 3:11 PM
Email ThisBlogThis!Share to TwitterShare to FacebookShare to Pinterest
Labels: combative adventures, exotic lands and customs (u), outre outfits (u), superlative skills (u), the uncanny