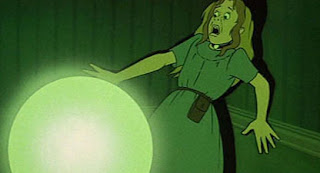 
As I'm not versed in the practice of music criticism, I can't address one of HEAVY METAL's most prominent aspects: the breadth of the musical accompaniment. I can appreciate the thought that went into the selection of contributing artists-- sometimes it seems more thought than was given to the selection of writing-and-animation-talent! I like that HEAVY METAL incorporates both the hard-driving tunes one usually associates with the term "heavy metal," as with "Radar Rider" and "The Mob Rules," but that it also includes slow ballads like "True Companion" and "Blue Light."

As I think over the stories in the HEAVY METAL anthology-- some of which are affecting in the film proper though they all look rather shallow on paper-- I'm reminded that whenever songs try to tell stories, the narratives generally have to be as stripped-down as possible. It may be that, even though HEAVY METAL the movie adapts some of its stories from comics-tales seen in the same-name magazine, the influence of the musical aesthetic keeps any of the narratives from being overly complex. Granted, any anthology trying to sell itself on the fourfold appeal of sex, drugs, rock-n-roll and ultraviolence might not be expected to be especially deep. But it's not a given that such an anthology would have to be simple: hence, my "stripped-down song-narrative" observation. The scriptwriters' decision to link all the stories through the Loc-Nar gemstone, a.k.a "the sum of all evils," proves the film's best symbolic touch. Old-time movie-theater audiences used to follow a "bouncing ball" to sing lyrics; in HEAVY METAL audiences get to follow a bouncing Mephistopheles as he relates his various successes and failures in corrupting humans (the film's "metaphysical" function for what that's worth).

Almost all of the narratives are enjoyable on the eye-candy level, and few 1980s reviewers gave METAL credit for its visual, as well as auditory, sumptuousness. The film's use of rotoscoping as a substitute for full animation hurts it at times, but unlike some CGI films I might name, HEAVY METAL is never dull. And whereas anthologies like DEAD OF NIGHT have been known to mix a little comedy with their serious dramas, METAL manages to prove its mettle by putting forth at least one story to fit one of Northrop Frye's story-mythoi.

"Harry Canyon," for instance, I judge to be a "drama." The tough cabbie of the story's title is tacitly modeled on the hardboiled private-eye works of Dashiel Hammett and Raymond Chandler, but projected into a grundgy Moebius-like future where corruption runs rampant and the police don't investigate cases unless they're paid up front. Canyon gives shelter to a shady lady on the run from a pack of villains searchng for the fabulos Loc-Nar, with predictable results. Although Canyon gets to hump the babe and blow away a few bad guys, "Canyon" doesn't have the invigorating spirit of heroic adventure and it's not quite nihilistic enough to make a good irony. At best it's sort of like a futuristic Chandler-story with a few ironic motifs borrowed from Hammett.

The splatter-gore horror-tale "B-17" I judge to be a true ironic work. Like many slasher-flicks, the story is straightforward in presenting a narrative in which "no one here gets out alive." WWII pilots encounter zombies. WWII pilots get eaten. End of (my least favorite) story.

"Captain Sternn" and "So Beautiful So Dangerous," both adapted (with significant changes) from stories that appeared in the HEAVY METAL magazine, are comedies. As a stand-alone comics-story Berni Wrightson's "Sternn" was an exquisitely-rendered shaggy dog tale with an ending that didn't work; in the film, the addition of the "Loc-Nar" to the equation improves the narrative tension. In addition, this sequence boasts the best dialogue, and the character Hanover Fiste's long rant against Captain Sternn is eminently quoteworthy. Angus McKie's sprawling "Dangerous" tale is condensed to a handful of space-stoner jokes and a routine about an alien robot getting married to a nice Jewish girl. Tolerable but nothing special.

North American feature-film animation, dominantly oriented on comedy, rarely drunk deeply of the mead of pure adventure-- making it all the more weird that a Canadian studio, rather than one from the U.S., produced the major breakthroughs of "Den" and "Taarna." The things I remember best from watching METAL on a big screen were the wild visuals of these pop-cultural mythologies: the hero Den being pursued by soldiers mounted on giant flying insects, Taarna abasing herself before a gigantic stone idol like something out of the 1940 THIEF OF BAGDAD. The former was based on the "Den" comics-series authored by Richard Corben, who seemed to derive it from equal samplings of Edgar Rice Burroughs and H.P. Lovecraft. The latter was an original tale, albeit visually indebted to the comics of Moebius. As I recall, in the "Den" tale the sentient Loc-Nar takes the place of a simple treasure-item from the original tale, so that when Den resists the temptation to gain power from the devil-globe, the Burroughsian adventure acquires a pleasing Faustian touch. "Taarna," however, was designed to give the audiences closure as on some far-off planet the female barbarian Taarna is called forth to destroy the Loc-Nar.

One interesting sociological aspect of HEAVY METAL is its treatment of female characters. In many ways METAL seems to channel many of the gender-tensions of the 1970s decade, tensions that were arguably shunted off to the side in 1980s cinema. On one hand. the stories "Harry Canyon" and "Dangerous" use female bodies as pure spectacle, with no finesse whatever. "Den" is a little more clever. It's very straightforward about being a male action-fantasy, dealing as it does with a nerd whose transition to another world mutates him into a super-tough muscleman. And yes, as soon as he gets to the otherworld he saves a huge-breasted girl from a human sacrifice, and she immediately rewards him with her body thereafter. However, though the film makes clear that the girl too is from Earth, it omits to mention (as the comic did) that she too was transformed from ordinary humanity to this pneumatic beauty. So in the original comic book, she's living her "fantasy"-- even though it's suspiciously in tune with a "male fantasy."

The "Taarna" sequence received some criticism in that the heroic barbarian girl dresses like a G-stringed stripper. Of course, it should be mentioned that many male pop-culture heroes stride around half-naked as well, not least Den as well as Tarzan and Conan. And like many heroines of live-action cinema of the 1970s, the fact that the heroine's hot doesn't diminish her ability to kill the villain very dead..
Posted by Gene Phillips at 1:35 PM
Email ThisBlogThis!Share to TwitterShare to FacebookShare to Pinterest
Labels: combative adventures, combative dramas, the marvelous