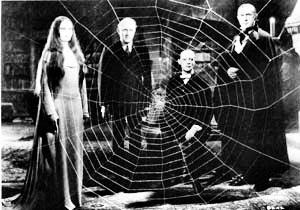 ...although, if there's any famous film that needs spoilers about as much as THE EMPIRE STRIKES BACK, it's probably Tod Browning's 1935 MARK OF THE VAMPIRE, itself a remake of the famed lost silent film LONDON AFTER MIDNIGHT.

To my recollection, long before I saw the film, it was commonplace for horror film-books to reveal MARK'S denouement: that the only "mark" that truly concerned the false vampires was the kind of "mark" actors have to stand on to deliver their lines. I feel reasonably sure that I never saw MARK without knowing in advance that the spooky Count Mora and his daughter Luna (rated by many fans as the first definitive image of the cinematic female vampire) were just actors playing the part of bloodsuckers as part of a detective's gambit to unmask a murderer.

Given that LONDON remains a lost film, there's no percentage in drawing comparisons between bits and pieces fans know about that film and this remake. It does interest me a bit to reflect the change in the story's location from England to Czechoslovakia, which was reflected in the film's working title "The Vampires of Prague." It's likely Browning changed the location to piggyback on the success of his earlier foray into vampirism, the formidable 1931 DRACULA. He even begins the film not with any of the main characters but with the humble peasantry singing mournful songs. One old woman has a bad experience in a cemetery, being spooked by a common bat and catching the hem of her dress on a tool that looks, for a moment, like a clutching skeletal hand. Though the sequence has nothing to do with the plot as such, one might argue that it sets up the audience for the quasi-Freudian revelation that the only boogiemen with whom mortals must contend are the constructs of their own minds.

The plot of MARK is, as many critics have observed, frankly preposterous. The patriarch of a wealthy Prague family, Sir Karell Borotyn, dies suddenly of two wounds in his neck and the loss of all the blood in his body. Though police inspector Neumann (Lionel Atwill) and many of his colleagues refuse to credence vampires, there are enough believers around (such as Donald Meek's certifying doctor) that the inquest concludes that the death takes place by "causes unknown." None of this does bereaved daughter Irena or her fiancee Fedor much good, though Irena's neighbor and guardian Baron Otto (Jean Hersholt) hovers in the background to provide solicitude of some sort.

Then, though Browning's diegesis is far from clear on this point, an entire year passes without much change (causing one to marvel at Fedor's patience!) Then suddenly two vampires start hanging around the local abandoned castle, apparently the recrudescent forms of Count Mora (Bela Lugosi) and his daughter Luna (Carol Borland). In a movement also strongly reminiscent of DRACULA, the two vampires eventually start flitting in and out of the Borotyn house. Count Mora doesn't do very much but Luna seems to take a particular interest in Irena, with a slight suggestion of some lesbian vampire action. With uncanny alacrity the vampires are followed by an apparent vampire hunter Professor Zelen (Lionel Barrymore), who gives all the usual Van Helsing advice about dealing with vampires, and predicts darkly to Irena, Fedor and Baron Otto that the two vampires have brought Karell Borotyn back to undead life as well. Indeed, someone resembling Borotyn is seen in the company of the vampires, and Fedor is apparently attacked by vampires, though the incident isn't depicted on-camera.

As noted above, however, it's all a big hoax, Zelen having been brought in by Neumann to "catch the conscience of the king." Apparently Neumann has suspected Otto as the culprit for the whole time, but only through this maneuver could he find out how Otto faked the vampiric murder, and his reason for doing so. Zelen and Neumann imply that their whole deceit depends on convincing Otto that the man he murdered has come back from the grave, implying that this will have a "hypnotic" effect on Otto so that he will recapitulate the murder, following the Freudian notion of psychological "repetition." Sure enough, the threat of seeing Borotyn return lulls Otto into attempting to repeat the murder on an actor feigning to be the dead nobleman, and so the inspector and his aides learn the means and motive. In addition to an end-scene revealing that Mora and Luna are simply actors engaged for this conscience-catching play, there's a revelation that Irena was in on the scheme and faked all of her vampiric encounters with Luna-- though it's far from clear as to why these crypto-lesbian encounters should have a persuasive effect on the Baron. However, Fedor was NOT in on the scheme, and the script by Browing and Guy Endore never elucidates whether or not the actors actually attacked him or not. (Perhaps they were ancestors of "the Method!")

As David Skal comments in THE MONSTER SHOW, the original script by Endore included a backstory for the long-dead count: that he and his daughter had an incestuous liaison, after which they both perished in some sort of suicidal pact. Or possibly Mora killed Luna, since Luna's character shows no death-marks, while Mora sports a bullet-wound in his temple to depict how his persona perished by his own hand-- a wound left unexplained in the diegesis, since MGM didn't allow any direct reference to incest.

Yet, in an interesting psychological twist, the Browning-Endore script does manage to put across a quasi-incestuous motive for Otto's crime, for late in the film he reveals that he, guardian and implicit replacement for the late patriarch, coveted Irena for himself. To the extent that Otto incarnates the Freudian myth of the "bad father" who covets his own daughter, the essence of the Mora-Luna relationship does make it into the film in displaced form.

Neumann's scheme-- to hypnotize a murderer whose used fake vampirism with the spectres of real vampires-- is of course unbelievable. But the many disappointed horror-fans who wanted Mora and Luna to be diegetically real in the film suggests that they, like Otto, were no less capable of being beguiled by such spectres.


ADDENDUM: I should note that though the simplicity of Irena's character mitigates against any psychological depth, there is one line of reasoning that might explain the lesbianism, one that invokes KING LEAR more than HAMLET. Folklorist Alan Dundes once observed that one might view LEAR as a fantasy projected from the psyche of "favorite daughter" Cordelia, in which she proved herself the most desired by provoking his extremely emotional reaction to her refusal to place him first. Perhaps it means something beyond simple plot-convenience that Irena lets a year go by without marrying her intended Fedor? Perhaps there's a part of Irena wants to walk on the wild vampiric side of life before she settles down to dull domesticity?


Posted by Gene Phillips at 3:34 PM
Email ThisBlogThis!Share to TwitterShare to FacebookShare to Pinterest
Labels: enthralling hypnotism and illusionism (u), phantasmal figurations (u), the uncanny