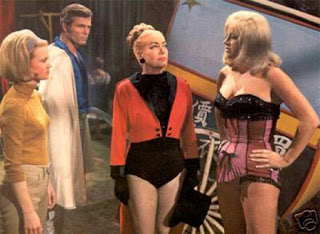 
Though there are some perceptive psychological motifs scattered throughout the Herman Cohen-Aben Kandel script for BERSERK, I can't help feeling that if they'd been doing this script in college we'd have witnessed them peeking over Robert Bloch's shoulder to read his notes for STRAIT-JACKET (1964).

To be sure, many horror critics have noted that even in his films of the 1950s writer-producer Herman Cohen showed a penchant for depicting young people being exploited or dominated by the older generation, often mad scientists like the ones in I WAS A TEENAGE WEREWOLF and I WAS A TEENAGE FRANKENSTEIN. That said, since in BERSERK Cohen and Kanel had to focus on a female star, Joan Crawford (then over 60 years old) it's perhaps natural enough that this time the conflict became one between older and younger females.

The photo above in essence depicts three women in a contentious stance. At center stands Crawford's character, circus-owner Monica Rivers, while at left is her demure looking daughter Angela (Judy Geeson) and at right is the flamboyant circus-performer Matilda (Diana Dors). It's significant that director Jay Connolly's mise-en-scene shows romantic lead Ty Hardin more or less skulking off to the side, for as the diegesis eventally reveals, men really are pretty irrelevant to the main conflict of BERSERK.

Hardin's character, wire-walker Frank Hawkins, makes his entrance near the picture's beginning, just after the circus' regular wire-walker meets a grisly death. Did Hawkins arrange his death so that he could get a job with the patrician Miss Rivers, who buried one husband and seems to rule the circus despite any input by her supposed partner Dorando (Michael Gough)? Dorando is patently jealous when Hawkins starts seeing Monica in the wee hours of the night, and in moments, Dorando is the next to die, killed in the film's most memorable scene: a spike being pounded through his head.

Yet Hawkins is never a serious suspect for the audience or the film's characters. Because the deaths boost patron attendance, the performers begin to suspect that Monica, not content with using them in the usual capitalistic manner, is actually killing them for profit. Matilda is the most vocal voice against Monica, but her case is compromised by the fact that she tries to get a thing going with Hawkins. Hawkins tosses her out, though it's clear he's doing it purely to protect his meal-ticket.

Thus even before the late appearance-- over halfway through the picture-- of Monica's daughter Angela, BERSERK is set up to present a sexual conflict between representatives of older and younger generations (Dors was in her thirties at the time). By contrast Geeson appears, in keeping with her name, to be "angelic:" she's discharged from her girls' school and dropped off at the circus because she's guilty of a lot of silly misdemeanors. Yet she makes it clear that she doesn't like Hawkins sleeping around with her mother ("She's too old for him") and seems to seek redress by teaming up with another performer, an older-- and married-- knife-thrower. Surprisingly, even though Angela is seen as the target of the man's knives during a public performance, there are hardly any of the phallic visual puns one might expect.

Compared to some psycho-films of the time, the female body-count is low here: only Matilda falls victim to a big-top murder, and the film ends with the death of the weak suspect Hawkins, who is sent plummeting to a bloody death upon upturned daggers. Angela then reveals herself as the murderess so quickly that one suspects the scripters were impatient to let her recite her wealth of grievances against her unmotherly mother. She even accuses Monica of having killed Angela's father, which may speak less to Monica's actual murderousness than to her lack of maternal and familial values. Angela, having killed the man who tried to supplant her father's memory and the woman who was in essence Monica's "disobedient daughter," is then quickly disposed of by a convenient lightning-bolt that furnishes a cost-free electrocution.
Posted by Gene Phillips at 11:25 AM
Email ThisBlogThis!Share to TwitterShare to FacebookShare to Pinterest
Labels: bizarre crimes and crimefighting (u), perilous psychos (u), the uncanny