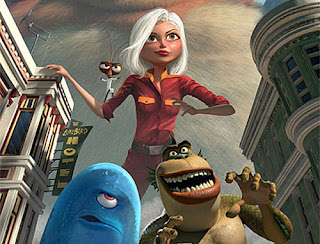 A part of me recognizes that MONSTERS VS. ALIENS isn't any sort of major breakthrough in animation. Its sociological theme, that monsters are people just like anybody else, is fairly banal, and the viewpoint character of Susan (aka Ginormica, voiced by Reese Witherspoon) is so much a "Josie Average" that she's never interesting in and of herself.

But as a funny love affair to fantasy-nerds in love with monsters, aliens, and everything in between, it's hard to beat.

Unquestionably MVA's best breakthrough was to do a comic monster-tale that didn't reference any of the Universal monsters so often tapped for similar projects. Given that the 1950s was the end of the old Gothic monsters and the beginning of a more streamlined-looking breed, MVA does well to team up Ginormica (a take on 1958's ATTACK OF THE 50-FOOT WOMAN) with allomorphs of other 1950s fiends,such as the Blob, the Creature of the Black Lagoon, and the Fly (if the Fly had actually been played by Vincent Price, instead of his just being one of the cast of the '58 film). On top of that, MVA's makers add in a pseudo-Mothra as an indirect nod to the Japanese kaigu eiga of the same period. In fact, MVA patently borrows the plotline of DESTROY ALL MONSTERS (1968), in which a group of Earth-monsters are (eventually) turned against an invading alien force. The biggest difference is that in DAM this plot-development occupies less than a third of the film, while in MVA it's the whole film. Late in the film, the script even acknowledges the debt, as head alien Gallaxhar (Rainn Wilson) tells his aides to "destroy all monsters," in the film's most appealing internerdly joke. The aliens are also a good composite of the bug-eyed monsters typical of SF-films: big-brained, multi-eyes, and with lots of tentacles.

While the script itself isn't especially complex, MVA scores high in terms of funny set-ups and bits of business. Even though the original film wasn't planned with 3-D in mind, the filmmakers did a fine job of adding in jokes that worked with the 3-D experience. I admit that I've not seen that many current films in 3-D, but MVA is the only one that I thought where 3-D enhanced both the action and the humor.

Because Susan isn't that compelling a character, she doesn't take full advantage of the proto-feminist theme implicit in the 50-FOOT WOMAN trope. (A scene in which she rejects the thickheaded fiancee she almost married falls flat.) Still, the sight of Ginormica kicking ass and dwarfing all the male monster-heroes (the psuedo-Mothra not counted, since "he" turns out to be a she) is a salutary image. Of her three supporting monsters-- The Missing Link, Dr. Cockroach and BOB (the Blob)-- it's Bob who gets the best jokes, verbal and visual.
Posted by Gene Phillips at 7:31 PM
Email ThisBlogThis!Share to TwitterShare to FacebookShare to Pinterest
Labels: combative comedies, the marvelous