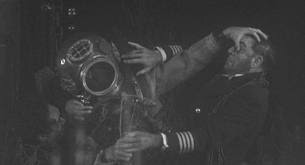 
Edward L. Cahn's first outing with the zombie genre is pretty dismal. Possibly the best one can say for it is that its lays ground for some better (and grottier) zombie-effects two years later in his INVISIBLE INVADERS, but even that is still pretty inferior to some of the better-written works he essayed, not least CURSE OF THE FACELESS MAN, reviewed here.

On one point ZOMBIES makes an interesting contrast with WHITE ZOMBIE, in that both films are almost exclusively about white characters encountering voodoo and zombie-ism, even though one film takes place in Africa and the other in Haiti. But whereas my review of WHITE ZOMBIE argued that the elison of black characters might be a strategy undertaken to avoid unpleasant real-world matters, in ZOMBIES it seems more likely that the omission came about by sheer lack of imagination.

In essence, ZOMBIES is a treasure-hunt story, in which the questers after treasure have to contend with supernatural forces called up to protect the treasure. I suspect that the only reason the script by Bernard Gordon and George Plympton even bothers to set the story in Africa was to use the "zombie" tag as a convenient buzzword. But there's nothing inherently African or even voodoo-like about the specters with which ZOMBIES' treasure-hunters contend, as they're all dead white sailors cursed to protect a treasure they once sought to steal. With little difficulty the script could have had the sailors cursed by Polynesians, or Asians, or even American Indians-- and in all likelihood, the script would have made no more of the irony of marauding white men being forced to do the will of a "nonwhite" belief-system.

Some of Cahn's features benefit from creative use of stock character-types, but ZOMBIES isn't one of them. Young Jan Peters, the audience's viewpoint character, ventures to visit her grandmother (or great-grandmother, depending on the dialogue) on an African plantation in the doubtless fictional Mora-Tau. At nearly the same time a treasure-hunting expedition arrives, seeking a lost fortune in uncut diamonds. Grandma Peters tells the expeditioners a forbidding tale about certain sailors-- including her own captain-husband-- lost their lives attempting to steal the diamonds from a local pagan temple, and that they now stand guard over the sunken gems. Naturally, no one believes her: not the expedition-leader George Harrison (!), his wife Mona (the always voluptuous Allison Hayes), Harrison's virile young trainee Jeff, or the expedition's scientific consultant Doctor Eggert-- who really doesn't do much to justify being in the story, beyond a few learned observations. The nub of the conflict among the treasure-hunters is that Mona has a thing for young Jeff, much to George's displeasure, but Jeff would rather romance Jan, much to Mona's displeasure.

Enter the zombies: slow-moving but almost invulnerable zombies. Thanks to Grandma Peters' advice the treasure-seekers soon find that they can't do much of anything to repel the revenants, though the zombies will avoid fire, as it theoretically can burn them up (though this never comes close to taking place). The only moderately tense moments in the film take place underwater, when George and Jeff dive to a sunken ship and attempt to escape with a chest of diamonds. The unbreathing zombies simply stalk along the ocean floor and attempt to destroy the two divers.

One of the more peculiar developments is that the zombies manage to kill Mona (but in such a way that she looks completely wound-less). The thick-headed George doesn't get the idea that she's actually one of the living dead, and takes her back to the plantation-house, where she soon kills one sailor and tries to kill others. It's also moderately interesting to see slim Allison Hayes portray an emotionless engine of destruction who does end up killing George.

Grandma fortunately has a prophecy to help get rid of the undead: the seekers must "destroy the diamonds." In a rather limp conclusion this is justified by having the diamonds scattered into the coastline waters, so that they're supposedly beyond recovery. Once that's done, all the zombies discorporate, though we only see Grandma's long-long captain-husband turn into an empty pile of clothes. About the only amusing moment in the dull ending is seeing Jeff try to rationalize sailing away with the diamonds and selling them in various ports, so that the zombies could never track them all down. Given recent events in Wall Street, I certainly wouldn't mind seeing a bunch of waterlogged zombies slog their way to the Diamond Exchange looking for heads to break.
Posted by Gene Phillips at 3:29 PM
Email ThisBlogThis!Share to TwitterShare to FacebookShare to Pinterest
Labels: the marvelous