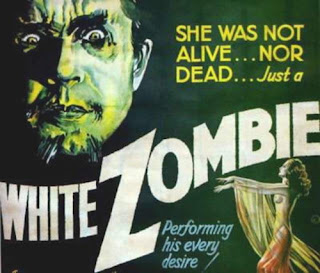 "The sociological elements of a white man enslaving black victims is not nearly as strong here as in the earlier WHITE ZOMBIE..."

A correspondent asserted that none of the living dead in Victor Halperin's seminal zombie-flick were black, as all are played by white actors and don't appear to be in blackface. This would be seem to be confirmed by the European names given to those that are billed, such as "Chauvin" and "Von Gelder." However, though a white actor portrays the "witch doctor" who teaches voodoo to the villainous Murder Legendre, and though he's given the European name "Pierre," I think it probable that scripter Garnett Weston meant him to be a black Haitian, regardless of the actor chosen for the role. Given that the script already introduces the anomaly of one European who is privy to the Haitian art of voodoo, Weston would hardly gain any narrative advantage from claiming that yet another European provided Legendre's introduction to this African-derived occult art. In addition, it seems to me that the zombified slaves of the infamous sugar-mill scene are a mixed lot, both black and white, though in this scene Halperin doesn't linger on the enslaved figures long enough to make the matter indisputable. I can't explain why WHITE ZOMBIE's makers avoided using black actors in the film to the extent that they did, but I think it's meaningful that the film's title is not "White Zombies" even though it's clear that other whites have been zombified prior to the female romantic lead Madeline (Madge Bellamy).

It's difficult to say how consciously either the filmmakers or audiences of 1932 thought about the sociological ramifications of Haiti, its religious amalgam of pagan and Christian elements, or the idea of zombies as "living dead men." But though I'm weary of Marxist platitudes about "postcolonialism" and the like, it can't be denied that to white U.S, citizens of the period, the concept of the zombie-- of a willing slave who will do anything he's commanded-- can't help but resonate on some level with the same citizens' knowledge of their country's implication in the history of black servitude. It's generally agreed that the film borrowed elements from two sources, William Seabrook's book MAGIC ISLAND and Kenneth Webb's Broadway play ZOMBIE (which was also the original working title of the Halperin film). I don't know how considerably either work uses the figure of the black zombie, but it may be that WHITE ZOMBIE'S filmmakers elided that figure merely to distance their work from their inspirations. (It's reported that Webb unsuccessfully sued the producers for copyright infringement.) One may also speculate that they felt the image of the black zombie might in some way hurt the film's chances at the box office, which, if true, might indirectly confirm the sociological influence of that image. Were that true, then the "white zombies" of the film might be deemed camoflague for the more controversial figure of the enslaved black servant.

In terms of the film's psychological components, the central figure might be deemed not romantic leads Madeline and her fiancee Neil, nor even the powerful villain Legendre (Bela Lugosi), but the weak-willed plantation owner Beaumont. Beaumont, besotted by Madeline's beauty, is on one level a Faust who calls up a demon, yet also the summoner who cannot control that demon. Legendre honors their bargain in typical Satanic fashion, making Madeline appear to have died so that the voodoo priest can resurrect her later. But as with many deals with devils, Beaumont finds that the soulless-seeming Madeline brings him no joy. His attempt to make Legendre reverse the voodoo curse merely gives Legendre an excuse to recruit Beaumont to the villain's zombie legions.

Halperin and Weston seem intentionally vague about the process of zombification. Since in the end Madeline is restored to Neil, it may be assumed that none of the zombies are technically dead. Yet there's implicitly something like real magic going on here, as opposed to the simplistic hypnotism-explanation from KING OF THE ZOMBIES. Lugosi repeats a mystic gesture throughout the film-- clasping one hand within another-- that implies that he works some telepathic will upon his slaves. There's some superficial discussion between Neil and a priest about the history of the pagan practices on the Haitian island that supports the film's claim to metaphysical symbolism, though the basic Faustian scheme is the strongest element.

Like many who have praised the film, my main affections are for Lugosi's demonic performance as Legendre and for Halperin's suggestive atmosphere, sometimes deemed like that of a "fairytale" in some reviews. Most of the other characters are far from strongly drawn, but in one sense this narrative strategy reinforces that faerie sensibility. Clearly Madeline's unearthly seduction also takes some influence from the Lugosi DRACULA, but her zombification does have its own identity apart from the vampirism of the comparable character in the earlier film.
Posted by Gene Phillips at 3:43 PM
Email ThisBlogThis!Share to TwitterShare to FacebookShare to Pinterest
Labels: the marvelous