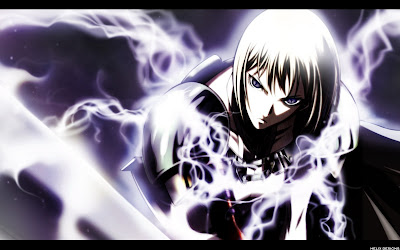 I've recently finished all 26 episodes of the FUNimation release of this dark-fantasy anime teleseries, without any recourse to the manga on which the series is based. In one sense this may be just as well, as net sources have asserted that the manga series had not yet finished at the time that the teleseries was scheduled to conclude. I didn 't know this while watching the DVDs, but I would certainly concur that the ending to the series fails to satisfy the dramatic underpinnings of the story. The last episodes feel padded not only with sheer hyperviolence but also with a number of tedious scenes showing one of the minor characters taking forever to reach a certain destination.

I do admire the basic concept of CLAYMORE. The series takes place in a dark, medieval-feeling fantasy-world where the human inhabitants are constantly under attack by carnivorous, shape-changing monsters called "Yoma" (named for a bogie from Japanese mythology). To combat the Yoma, a mysterious organization creates sword-wielding warriors colloquially called "Claymores," which the manga presumably derived from the Scottish sword. Claymores are created by somehow hybridizing human beings with Yoma so that the Claymores have supernormal powers, enabling them to change shape to some extent and to heal from extraordinary wounds, even to the extent of reattaching torn limbs. The usual Faustian problem arises from this stratagem, though: Claymores have a tendency to convert to Yoma at some point, at which point they must be slain by their own kind.

At the time of the story, all Claymores are female, with the viewpoint character being one Clare, the only warrior in the narrative to form a strong attachment with a male, name of Raki. However, some backstory informs us that in earlier days the organization experimented with both male and female hybrids. Male Claymores proved useless, however, for they tended to become seduced by the Yoma impulses too easily. I would have liked to have seen the script touch more deeply on the perceived differences of male and female psychology that led to the superiority of females in this matter, but there's only the vague statement that the power of the Yoma nature has a quasi-sexual appeal. The implication is that dudes just can't keep from going werewolf, though it seems to be inevitable that the female warriors eventually succumb as well. I only listened to the English soundtrack, but I suspect the Japanese translation didn't address the psychology in much greater depth.


Sociologically CLAYMORE bears a strong resemblance to many manga and anime in which male characters are almost entirely omitted in favor of a sisterhood based on female companionship, a narrative motif that became extremely popular in Japan during the 1990s and 2000s. However, at base CLAYMORE is yet another Japanese valorization of the samurai ethic, translated into fantasy-world terms. The Claymores travel from place to place like the traditional ronin (masterless samurai), defending small enclaves of normal humanity in exchange for payments that are passed on to their main organization. Strangely, in 26 episodes I never saw anything resembling the ruling powers of the world, with the exception of Yoma masquerading as human lords. The exclusion of such a ruling class in the teleseries helps emphasize the Claymores' distance from ordinary human beings, who fear and sometimes revile Claymores as just another species of monster. More tellingly, Claymores are forbidden by their masters to strike down even evil human beings, which may be the organization's means of keeping the Claymores themselves from becoming rulers. This touches on another fault of the teleseries: that it never reveals the essential nature of the Claymore organization as being good, bad, or beyond such terms. In any case, the series places all of its emphasis on the near-unbridgeable gulf between the noble warriors and the humdrum town-dwellers. I'm reminded of Socrates' assertion in THE STATESMAN as to how two virtues might conflict: that of the temperance that flourishes within a community versus the rule-breaking courage of the professional soldier.

Naturally, there is partial redemption for the Claymores, beyond their own insular sisterhood, signaled from the start by Clare's friendship with ordinary town-boy Raki. However, over 26 episodes this theme of rapprochement is unevenly developed, with more narrative emphasis going to Clare's emnity for recurring villainess Priscilla, a "Claymore gone bad." As a villain Priscilla is poorly developed, which may have much to do with the series not being able to draw from a finished manga. A couple of episodes are devoted to a much more interesting "bad Claymore" named Ophelia, who like many Japanese villains has a well-developed capacity for sadism. One of the serial's most gripping moments begins with Ophelia slicing off Clare's legs at the knees, and then challenging her former comrade to re-attach her limbs before Ophelia can kill Raki. Unfortunately, Ophelia doesn't last as long as I would've liked.


In conlcusion, CLAYMORE is a worthy enough series of its kind. And for all I know at present, it might even be better than the original manga.
Posted by Gene Phillips at 4:20 PM
Email ThisBlogThis!Share to TwitterShare to FacebookShare to Pinterest
Labels: combative adventures, the marvelous