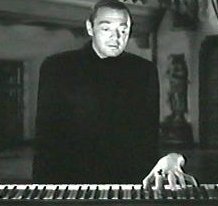 One interesting similarity between this 1946 film and 1935's MARK OF THE VAMPIRE is that in addition to holding in common the exact same pattern in the categories I list above, both films are also about a character who tries to fake a supernatural visitation, only to be victimized by his fantasy that the supernatural now haunts him. BEAST does proceed to that point a little more logically than MARK does, however.

I read the original "Beast with Five Fingers" short story years ago, but have not reread it for the purpose of this essay. Though I'm sure the filmmakers took some key concepts from the prose tale, one review asserted that the film changed a lot of the details, so I'll approach the BEAST as its own animal.

My discussion necessitates a thorough summary:

A rich former pianist, Francis Ingram (Victor Francen), occupies a villa in Italy. A stroke has crippled him, though he still has one strong working hand. His only relatives live in England, but there are still three people in his life: Bruce (Robert Alda), an American living in Italy on his wit and charm, Julie (Andrea King), a young woman engaged to be Ingram's nurse, and Hilary (Peter Lorre), Ingram's secretary, who spends all his times poring over Ingram's library for its recondite occult contents. Despite his age and crippled condition, Ingram falls in love with Julie and wants her to stay with him. However, Julie has an off-again on-again affair with Bruce, which is somewhat in the "off" position as she plans to leave Italy, much to the chagrin of both Bruce and Ingram. During a conversation with the condesceding patriarch, Hilary foolishly reveals to Ingram the affair between Bruce and the woman Ingram now loves. Ingram almost chokes Hilary to death with his good hand, and then fires him. But the same night Ingram, spooked by intimations of death, gets out of bed, roams the halls in his wheelchair and ends up taking a fatal tumble down a flight of stairs.

Soon the late Ingram's greedy relatives show up, expecting a substantial inheritance. One of them smugly tells Hilary that he plans to transport everything in the estate, including Hilary's beloved library, back to England. When the will bequeaths Ingram's entire estate to Julie, the relatives object, and conspire with the family lawyer to contest the will. The next night the lawyer is strangled, and some evidence points to the idea that Ingram's detached hand has assumed a ghostly existence and is out to kill those who contest the will. In due time it comes out that Hilary is faking the existence of a spectral hand so that Julie can keep ownership of the library, since she's favorably disposed to his continuing his studies. However, Julie isn't favorably disposed to murder. She's saved from being killed when Hilary begins to lose his marbles and see the hand of Francis Ingram appearing before him, until it finally strangles him to death-- though the coda reveals that Hilary merely killed himself with his own psychological spectres.

The psychological texture of BEAST-- scripted by Curt Siodmark from the prose tale and directed by Robert Florey-- is much denser than that of Tod Browning's MARK OF THE VAMPIRE. Yet while one can see a faint conformity with the Freudian "Oedipus complex" in MARK-- a conformity which David J. Skal theorized may have been derived from Browning's encounter with Freudian theory-- BEAST seems to play around with Oedipal elements only to take them off in another direction.

In TOTEM AND TABOO Freud theorized that in antiquity aging patriarchs attempted to keep all the young women (possibly including their daughters) to themselves, so that the young man had to rise up and kill the patriarchs to get back the women. Ingram is from one angle just such a "bad father," as was Baron Otto in MARK, although the process by which Ingram falls in love with Julie is given greater development. But though Bruce is Ingram's competition, Ingram and Bruce never exchange any hostilties. Instead Ingram's almost "kills the messenger" when Hilary tells Ingram of the affair, though even before that Bruce remarks that Ingram treats Hilary like dirt. Freud might thus see Bruce as the "favored son" and Hilary as the "son out of favor." This pattern, which may or may not occur in the original short story, was one which Siodmak had invoked independently in his earlier WOLF MAN script.

Yet the Freudian paradigm doesn't work here as well as it does in MARK, or even DEAD MEN WALK. In the Florey-Siodmak scenario, "despised son" Hilary could not care less about the feminine prize coveted by Bruce and Ingram. As noted earlier, Hilary cares only about his astrological research. The purpose of the research is never clearly spelled out but seems to have something to do with forecasting the date of individual deaths. His motive for killing, or attempting to kill, the intruders on his territory is to protect the property he refers to as "his books."

I briefly wondered if the script had been tooled with Peter Lorre in mind. By 1946 Lorre had long since established a vivid history of playing men who were either mad or perverse by societal standards-- M, MAD LOVE, THE MALTESE FALCON. By contrast with the Lorre characters in these narratives, Lorre's Hilary seems utterly asexual. However, an anecdote from Siodmak asserted that he had framed his script with handsome Paul Henreid in mind for the role, not Lorre.

Still, whether the asexuality of Hilary stems from the original story or the film-script, the film-Hilary evinces some fruitful parallels to other horror-film madmen who seem obsessed with gaining some pure, non-utilitarian form of knowledge-- not least of which would be Robert Florey's 1932 "adaptation" of another famed horror-tale: MURDERS IN THE RUE MORGUE, which invented "Doctor Mirakle" to be its Frankenstein-like rogue-scientist.

Similarly, whereas the transferred hand of MAD LOVE seemed to carry an Oedipal charge, there's no grounds for interpreting the "beast with five fingers" as some phallic substitute. Even though the "beast" never exists outside of Hilary's mind, one might say that Hilary has corrupted the hand of his former master, or at least its image, even as Frankenstein perverts dead bodies. The parallel holds even in terms of the source, for unlike many of Hollywood's bitter crippled characters, Ingram is forbidding but never actually villainous. Hilary alone casts Ingram in the role of supernatural avenger, and Hilary pays the price for this presumption.

Given that so many Hollywood films have deferred to Freud for rationales about haunting spectres conjured up by guilty minds, this digression from Freudian motivation is worth noting. It may not be very clear what Hilary wants to achieve with his astrological research, but at least his character demonstrates a broader concept of *libido,* demonstrating-- on a somewhat parallel path with Carl Jung's theories-- that sex is not the only thing human beings truly value, much less the only thing they think to be worth killing for.
Posted by Gene Phillips at 3:21 PM
Email ThisBlogThis!Share to TwitterShare to FacebookShare to Pinterest
Labels: phantasmal figurations (u), the uncanny