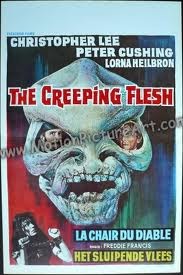 
Roughly five years after Robert Hartford-Davis' 1968's CORRUPTION dropped the ball in getting full value out of its theme, expert horrormeister Freddie Francis shows him how that theme should have been done.

Not that Tigon Studios' CREEPING FLESH is a perfect horror film: it's probably a little overambitious and fails to deliver a memorable boogieman, posters to the contrary. But CORRUPTION fails to tell a good tale about what happens when Stuffy Old England tries to cohabit with Young Mod England, in the persons of a conservative professor and a swingin' young model. CREEPING FLESH doesn't draw its characters with all that much more complexity, but its somewhat-similar theme-- the consequences that arise when a conservative professor (again essayed by Peter Cushing) tries to control the forces of lubricity-- is far superior.

Essentially, the premise of CREEPING FLESH can be boiled down to: What if Doctor Jekyll had been an evolution-minded paleontologist rather than a chemist? Here the sin of Victorian doctor Emmanuel ("God is With Him") Hildern is that he unearths a strange manlike skeleton in the wilds of Papua New Guinea, brings it back to his lab in England and soon finds himself speculating that the skeleton may be "the source of all evil." There's decidedly something odd about the skeleton, in that when a little bit of water touches one finger of its skeletal hand, flesh forms on the bone until it's sporting a bonafide living finger. Like many a foolhardly scientist, Emmanuel not only fails to bury the creepy thing in a chalk pit somewhere, he amputates the finger and uses it to create a serum which-- calling Doctor Jekyll again-- he thinks will immunize human beings of their propensity for evil.

As an ingenious twist on the Stevenson theme, however, Emmanuel isn't concerned with making himself a sinless angel. He wants to keep his daughter as pure as the driven snow-- and as far from being like her mother as possible.

Just as CORRUPTION posited the notion that Cushing's fusty character (pushing 60 in '68) would land a hot young model, CREEPING FLESH asserts that the equally fusty Emmanuel once pursued and married a hot Folies Bergere dancer-- though at least he's supposed to have met and married her when he was younger. She's seen only in flashbacks, played with verve by Jenny Runacre. Mrs. Hildern managed to bequeathe Emmanuel a daughter, Penelope (Lorna Heilbron) before Mama went mad, possibly as a result of contracting syphilis from her many man-friends. Although Penelope has grown to young womanhood and dresses conservatively to please her father, Emmanuel will not allow her to know anything about her late mother's history, fearing that the slightest influence might transform Penelope into the image of her mother.
Enter the serum, which in the Stevensonian tradition has exactly the opposite effect of what Emmanuel desires.Soon conservative Penelope dresses up in one of her mother's flashy gowns and wanders down to the local pub, which leads her into a web of sex and violence. Meanwhile, Emmanuel experiences fear of a native prophecy predicting armageddon if the skeleton is exposed to rain, while the scientist's arrogant half-brother James (Christopher Lee) plots to usurp Emmanuel's research for his own purposes.

Considering that the writers of the CREEPING screenplay never worked on another horror-film before or after this one, they do a remarkable job of keeping up a steady stream of disquieting imagery, not only in Emmanuel's lab but also in brother James' insane asylum. The script doesn't succeed in putting across its radical melding of metaphysical and cosmological motifs; that is, of convincing watchers of the notion that "evil is a disease," a foreign culture that Emmanuel actually witnesses invading blood-cells. However, such an identification is certainly true to the culture of Victorian England. Today we may smirk when Sherlock Holmes proclaims of his foe Moriarty that "a criminal strain ran in his blood," but for Victorians this sort of conflation of science and morality served a definite social purpose.

The perception of sexuality in Victorian society, the well-known "whore vs. virgin" trope, is on full display here through Penelope's transformation into a female Mister Hyde. And yet, it's interesting that the filmmakers didn't leap to force the tormented Penelope to become an instant slut. During her confused pub-crawl she doesn't try to initiate sex, though she does dance tempestously. But when a man mistakes her for a whore and ushers her upstairs to a private room, Penelope doesn't do the obvious "Hyde" action and let him take her. Further, when the john tries to rape her, apparently still convinced that she's only play-acting, she claws his face so severely that he retreats. It's often been observed that a lot of cinematic depictions of rape end up making it look A Good Time Was Had By All. Director Francis doesn't go in this direction; his skillful camera shows Penelope horrified by the sexual threat all the way, without any intimation that her struggle is all for show. Indeed, when Heilbron runs afoul of the law, it's not for sexing people up, but for committing acts of violence-- arguably enacting her father's nature than that of her loose-limbed mother.

In Freudian terms Emmanuel's near-hysterical determination to keep his daughter's sexuality under control would probably be viewed as a camoflague for his actual desire for her, or at any rate for her resemblance to his wife. I wouldn't quite go that far; certainly Cushing never allows the audience to see repressed daughter-lust in Emmanuel. But there's no question that the script wants to show that the intention to prevent a thing can cause that very thing to happen. And Freudians would certainly love the symmetry of the "finger-motif"-- Emmanuel cuts off the skeleton's one whole finger near the beginning, and the last shot of the film is a close-up of his hand, now lacking one finger. Otto Rank would certainly reference the story of Orestes, who bit off his own finger due to the torment of the Furies as they punished him for killing his mother, just as Emmanuel desires to kill the aspect of his wife within his daughter.
Posted by Gene Phillips at 3:17 PM
Email ThisBlogThis!Share to TwitterShare to FacebookShare to Pinterest
Labels: the marvelous