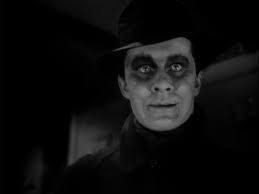 Given that director Lewis Seiler (best known for GUADALCANAL DIARY) worked for many years in B-pictures, it's odd that he directed so little of relevance to metaphenomenal cinema. In any case THE SMILING GHOST, though far from a masterpiece of the "haunted comedy" genre, is still a welcome addition.

One societal aspect that dates the film right away is that even though the slightly-dim hero Lucky Downing(Wayne Morris) is down on his luck jobwise, he still has a black valet in tow, Clarence (Willie Best), who for reasons left unclear hasn't fled for greener pastures. Clarence's loyalty to his employer is even harder to fathom when Lucky is engaged to be engaged; to pose as the fiancee of wealthy Elinor Bentley (Alexis Smith). Elinor is a bride plagued by a series of "done-away-with" grooms (three in all), having been apparently been terminated by a mysterious haunting spectre known as "the Smiling Ghost."

Lucky, somewhat besotted by the gorgeous heiress, takes the job, despite the caustic comments of lady reporter Lil (Brenda Marshall), herself more than a little interested in the handsome doofus. Soon, in addition to negotiating the hostilities or curious habits of Elinor's friends and relatives, Lucky and Clarence do indeed encounter a spectre with a hideous rictus-like grin-- an impressive makeup job, BTW, much better the one that's center-stage for William Castle's MR. SARDONICUS. Eventually it comes out that the Smiling Ghost is actually Elinor's first unfortunate fiancee, who only appeared to die (and was not offed by any ghost, smiling or otherwise). The jealous lover then sought to kill anyone who attempted to cohabit with Elinor, though as matters develop the beautiful Elinor isn't much in the "good character" department.

The most interesting psychological aspect of GHOST is a feminine one, which I term "Pretty vs. Gorgeous." In many romantic comedies, the excessively gorgeous women are often morally suspect in some way, while by contrast their merely pretty rivals are the salt of the earth. Toward the end of the picture Lucky belatedly realizes that he's really in love with pretty Lil rather than the gorgeous temptress Elinor, and makes the right choice (at least for his type of low-comic hero) in line with audience desires. My view that this "virtue vs. vice" choice has become a major U.S. archetypes may be supported by the fact that one can see representative examples that range as far apart in time as Frank Capra's 1931 PLATINUM BLONDE and Rob Reiner's 1985 THE SURE THING.

As expected, Willie Best plays the usual scaredycat black servant, though as it happens the white characters of GHOST aren't much braver in encountering the titular fiend (although support-cast Alan Hale is something of an exception as a tough butler with a "dese dem and doze" accent). In addition, Clarence has to contend with an eccentric old man living at the family mansion who likes to collect heads and suggests that he'd like to add Clarence's to his collection. And to slightly palliate the stereotype, Lucky Downing does treat Clarence more like a friend than a servant, thanks to good on-screen chemistry between Morris and Best. I've always thought the worst aspect of the "scaredycat black" routine appeared whenever it allowed the sensible white lead-hero to assume an air of superiority toward the comic black guy. Lucky, at least, doesn't do that, in contrast, say, to the heroes of KING OF THE ZOMBIES.
Posted by Gene Phillips at 3:15 PM
Email ThisBlogThis!Share to TwitterShare to FacebookShare to Pinterest
Labels: outre outfits (u), phantasmal figurations (u), the uncanny