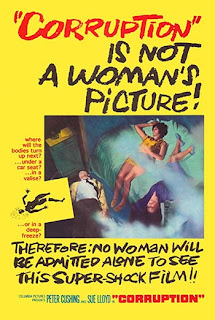 
By the time this Brit-horror film showed up on theater-screens, there had been a good number of films, horror and otherwise, which stressed the culture clash between "Old Blighty" and New Mod Britain. The clash even resounded in some American productions. The award for the most farcical depiction of the conflict is probably the third-season BATMAN episode entitled "The Londinium Larcenies," where it takes the shape of fusty Brit villain Lord Ffogg contending with his Carnaby Street-clad evil daughter Lady Prudence.

CORRUPTION has its own farcical moments, of course, which is a shame. The early set-up of the conflict suggests a potential depth of character that the latter half chooses not to deliver on.

The setup: Upper-class surgeon Sir John Rowan (the always excellent Peter Cushing) attends a party with his new girlfriend Lynn (Sue Lloyd). The host is Lynn's former fashion-photographer, who immediately tries to lure her back into the modeling game, getting her to pose at the party under hot spotlights. Lynn claims to be marrying Rowan for his character, not his title or money, yet it's clear by her attitude that she likes the idea of being the center of attention again. However, Rowan is irritated by her waywardness and tries to make her leave the party with him. Rowan and the photographer struggle, and both are responsible for knocking over a spotlight onto Lynn. Her face, the great source of her self-esteem, is horribly scarred.

Rowan tries to make things right, as he just happens to have a new endocrine treatment ready to test on some needy patient. To everyone's amazement, the treatment works, and Lynn's facial skin repairs itself-- for a while. When Lynn regresses, Rowan does the only thing a guilty doctor can do: he starts killing other women to derive flesh for facial grafts. One of his last victims, however, is a girl whose raffish friends invade Rowan's home looking for her. The thuggish young mods apparently plan to rob and maybe kill the older couple no matter what's happened to the girl, but they're rather comically shocked to find that the good doctor is a killer who keeps a severed head in his fridge. Chaos ensues, culminating in the film's most memorable scene, as a surgical laser on a swivel-mount goes wild and kills everybody in the house.

There was some good story-potential that might have been explored alongside all the killings and histrionics: though Rowan and the photographer are responsible for Lynn's injury it could be said that she brings her calamity about through her own ambivalence. This is supported by an interesting early scene where Lynn tries to get back into the modeling game (prior to the facial regression), only to be told she's been out of the game too long. But as the film progresses any subtlety of character depiction goes out the window, and Lloyd's performance, originally presented in naturalistic terms, becomes that of a shrieking harpy. Cushing does his best under the circumstances but he hasn't much with which to work.

Despite the amusing attempt of advertisers to make gender conflict a selling-point for the film-- as noted above in the "not a woman's picture" ad seen above-- there's really no interesting points, subtle or unsubtle, about female vanity or the like.

The film's final scene apes the "it may be all a dream, or is it?" ending of 1945's DEAD OF NIGHT. But DEAD worked to make that ending effective, while this time the same device comes off as nothing but... a corruption.
Posted by Gene Phillips at 3:47 PM
Email ThisBlogThis!Share to TwitterShare to FacebookShare to Pinterest
Labels: the marvelous