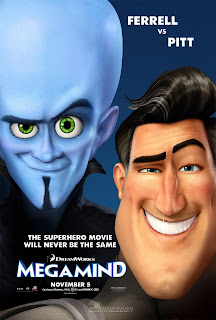 I decided to follow up my review of 2009's MONSTERS VS. ALIENS with one of MEGAMIND because though both are aimed at the same audience (genre-knowledgeable kids and adults with a taste for heavy CGI effects and slapstick humor), MEGAMIND pretty much gets wrong everything that MVA gets right.

Both are very slight story-concepts. In the 2009 film, the monsters of Earth are enlisted to fight invading aliens. MEGAMIND takes Superman's concept of an alien hero coming to Earth from the stars and rewrites it into two such aliens landing on Earth at the same time but ending up going in opposite directions. Metroman (voice of Brad Pitt), essentially a doppelganger of comics' Man of Steel, gets all the breaks and becomes the world's beloved hero/babysitter. The titular Megamind, whose only power is comparable to Lex Luthor's ability to invent copious quantities of weird weapons, is the goat of the world who turns to villainy as a compensation.

Oddly, though director Tom McGrath voiced a character in MONSTERS VS. ALIENS, he didn't learn anything from that film's pace or inventive comic setups. He did have a previous comedy hit with MADAGASCAR, though on that film he shared director credit with Eric Darnell and collaborated with other writers on MADAGASCAR's script. MEGAMIND's credited scripters Alan Schoolcraft and Brent Simons, however, don't seem to have extensive track records, which may have something to do with the tyro-ish feel of MEGAMIND.

MEGAMIND's script feels like something written by people who had seen a few Superman vs. Luthor stories in films or television, and who put little thought into anything beyond the above-described premise. The script telegraphs several of its developments. Early in the picture, Megamind comes to believe that, after many years of attempting to conquer Metroman, he succeeds in doing so when he least expects to succeed. It's not hard for the experienced moviegoer to suspect something's rotten in the "Denmarkian" script, and sure enough, there's a Big Surprise as to Metroman's rumored death. As soon as heroine Roxanne Ritchie (note the alliterative salute to "Lois Lane") reveals to the audience that contrary to everyone's beliefs she was never Metroman's girlfriend, it's a given that Roxanne's going to be improbably matched up with Someone Else; i.e., lovable loser Megamind. Even a minor affectation, in which Megamind alone repeatedly mispronounces Metroman's name, is a set-up for a hamhanded plot-development.

Because MEGAMIND is so busy scoring plot-points, it misses any opportunity to play with the fertile psychological potential of the central idea. Long before Lex Luthor was given a semi-tragic background that made him the "shadow" to Superman's "substance," it was common for villains to turn evil because they had some horrible misfortune. Often heroes had their own traumas, but they would compensate by following paths of altruistic devotion, while villains sought self-aggrandizement, attempting to rewrite their bad fortune by casting it onto others. MEGAMIND simple-mindedly rewrites this dynamic into a "Revenge of the Nerds" schtick, but they pull their punches in that Megamind never really enjoys his attempts to be the bad guy. In the "Coyote and Roadrunner" cartoons, it's a given that the Coyote must always fail to devour his avian quarry. But the audience takes pleasure in seeing him wring his hands with delight at the prospect of finally coming up with just the right gimmick.

Most of the big FX-scenes fail to deliver on either visual awesomeness or the comic undercutting of same, as can be seen to good effect in the first SHREK, THE INCREDIBLES, and the aforementioned MVA. The final battle between Megamind and his figurative offspring (a doofus charged with super-powers so that he can replace the allegedly dead Metroman) has a few decent moments but is consistently undercut by the pedestrian script.
Posted by Gene Phillips at 1:03 PM
Email ThisBlogThis!Share to TwitterShare to FacebookShare to Pinterest
Labels: combative comedies, the marvelous