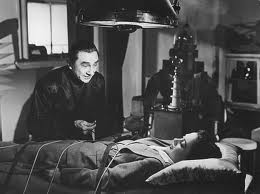 I know that the above film didn't receive the American title I'm using until six years after the death of star Bela Lugosi, but since that's the name under which I've always seen the film, that's the one I'm going with.

Re: the immortal (or is that immoral?) teaming of Bela Lugosi and Britain's serial comedy-star Old Mother Riley (actor Arthur Lucan in old-lady drag)-- this film is one of the best proofs that humor often doesn't travel well from one country to another. In my teen years I saw a TV broadcast of SON, and I thought it merely stupid and unfunny. Seeing it now, it's still not funny to me, but I can distantly appreciate gleaning from the film some sense of the comic traditions of the English music-hall, which was Britain's equivalent of American vaudeville. I'm aware of a lot of vaudeville-based American comedians that I once thought were quite funny-- Red Skelton and Milton Berle, for two. It's likely that a lot of their appeal for me way back then was simply because they reflected my culture's preferences-- though, to be sure, Uncle Miltie's propensity for drag never seemed to catch fire in the U.S. the way similar routines did in Great Britain.

The function here is loosely sociological, less for the aspect of the plot involving Bela Lugosi (though anything with spies in it has some hint of matters sociological) than for Lucan's antics as a brash Irish working-class woman. "Her" best moment here is probably a song celebrating the joys of dodging bill-collectors. The scenes pairing Lugosi with Lucan aren't particularly interesting, though Lucan does have a fun scene being chased by Lugosi's huge clanking robot.

Lugosi's character Von Housen isn't a vampire, but a mad scientist out to attack the democratic world with various super-weapons-- though the robot is the only one we see. As a nod to the Dracula image, Von Housen believes that he has vampires in his pedigree, and is first seen arising from his coffin after a night's sleep, attired in the *de rigeur* evening-dress of the Universal bloodsucker. However, in one of the film's few nods to realism, Von Housen dispenses with the evening-wear afterward, and goes about clothed in an ensemble of black tunic and trousers that seems a wee bit more practical for a spy and saboteur.

Most of the plot revolves around a post-office mistake that sends Von Housen's robot to Mother Riley, followed by the attempts of the spy and his noodnik henchmen to retrieve the marauding mechanism. But in a few scenes, I was rather impressed with Lugosi's comedic work. Often in comedy-horrors, Lugosi was required to play his villainous character reasonably "straight," as seen in ZOMBIES ON BROADWAY, BELA LUGOSI MEETS A BROOKLYN GORILLA, and of course ABBOTT AND COSTELLO MEET FRANKENSTEIN. However, Van Housen is allowed to be a little nuttier, and Lugosi manages to put across that nuttiness without resorting to mugging (which he did do on occasion). Bela's best scene is the moment when he realizes that he's received the Wrong Box in the mail: the alternation of broad surprise and horror on Lugosi's face looks real, and yet is played just so that it's also pretty darn foolish-looking.

The story behind Lugosi's sojourn in Great Britain is without doubt more interesting than the movie, though had he not done the film, Americans would never have known the joys of Mother Riley-- for whatever that's worth.
Posted by Gene Phillips at 3:15 PM
Email ThisBlogThis!Share to TwitterShare to FacebookShare to Pinterest
Labels: the marvelous