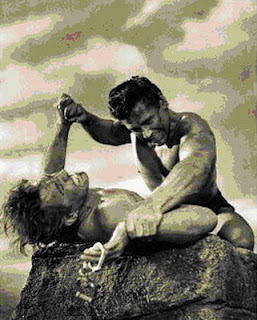 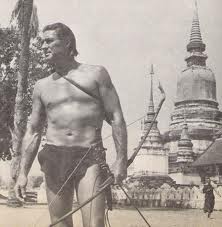 Once again I find myself reviewing two Tarzan flicks in which one's very good and the other's just "eh." Unfortunately as time went on the franchise would turn out more of the latter than the former.

I'm going to do the lesser work first, even though it's second in terms of chronology, just because I feel like getting it out of the way. Director John Guillerman's TARZAN GOES TO INDIA registers as a huge disappointment alongside the same director's excellent TARZAN'S GREATEST ADVENTURE, even though the director once again shot the ape-man's adventures on colorful location-settings.

Theoretically the setting in an Indian jungle should have sparked the creativity of the writers (one of whom was Guillerman). India has long been a watchword for the wondrous and the exotic, and even Tarzan's long-standing concern with elephants might have been related to Indian beliefs or customs concerning the animals. But INDIA is not much more than a NATIONAL GEOGRAPHIC travelogue with a little action interspersed.

The plot is as predictably simple as the hoary ivory-hunter schtick from the 30s films. Tarzan, who just happens to be friends with a Maharajah, is called to India for his elephant-expertise. The Indian government has given an engineering company permission to construct a new hydroelectric dam in a certain valley, in order to bring the prosperity of progress to the locals. Unfortunately, some 300 elephants dwell in the valley, and they'll all be drowned when the dam's building inundates the valley. There's one way that Tarzan and his allies (a young boy named "Jai," and the Maharajah's daughter) can lead the elephants out of the valley, but it means trampling some of the construction-work of the engineers. Most of the engineers, with the exception of heavy Brice (Leo Gordon), don't want to kill elephants (nothing is said of other animals in the valley) but they're desperately trying to finish the dam before the monsoon season, so human progress comes first. Tarzan has a handful of episode encounters with local wildlife (such as a nice struggle with a cobra) before he leads his allies and the elephant-herd through the engineer's construction to safety. Then, with a nod to the importance of progress, he and his allies help the engineers rebuild, and everyone's happy but the villain Brice, who gets killed earlier.

There's nothing horribly wrong with INDIA; it's just flat, as are most of the actors' performances. Jock Mahoney's first of two performances of Tarzan is adequate, but he doesn't quite pull off Gordon Scott's steely-eyed glare at the film's villain. None of the one-shot characters are very interesting, though the character of Jai (played by an Indian actor of the same name) seems to be an early template for another Jai, a support-character played by Manuel Padilla Jr. in the 1966-69 Tarzan teleseries.

Moving a little backwards, TARZAN THE MAGNIFICENT, directed and partly written by long-time journeyman Robert Day, seems to pattern the look of MAGNIFICENT on Guillerman's ADVENTURE. For the last time Gordon Scott plays a Tarzan who sweats and gets wounded, as well as speaking complete sentences. As seen before in TARZAN AND THE LOST SAFARI, once again Tarzan becomes saddled with leading a group of mostly-helpless civilized types from one African spot to another, though the ape-man is primarly concerned with getting fugitive raider Coy Banton to justice. Tarzan's "Stagecoach"-style retinue is made up of pretty stock figures: a comely young woman, a disgraced doctor, a engineer (albeit an educated black man, whom Tarzan says is the only one he *wants* coming along), and a couple with a troubled marriage. The husband, Mr. Ames (Lionel Jeffries) in said couple is the prime source of causing trouble for Tarzan's expedition, as he's a conceited Englishman constantly seeking to prove his virility and usually screwing things up for others. But Tarzan has to take him along for specifically altruistic reasons: because many Africans will lose needed work if Ames' business deal doesn't go through. There's a development the Weismuller films would never have countenanced: Tarzan the Capitalist Stooge!

However, just as STAGECOACH had its motley crew pursued by hostile Indians, Tarzan's group is relentlessly pursued by the raider-family to which Coy belongs: the patriarch Abel Banton (John Carradine) and his three other criminals sons, all heavily-armed expert trackers. To my recollection this is the first time film-Tarzan ever faced a whole family of villains, as opposed to his meeting separate-but-related opponents (as in TARZAN AND THE TRAPPERS) or whole tribes, which are admittedly "extended families." Abel Banton's monomaniacal desire to rescue his favorite son Coy from justice gives him a touch of tragic grandeur, even if he is still a thief and a murderer.

One interesting aspect of the script's construction is how each group manages to lose some members, not just to death (Tate the engineer, two of Banton's sons), but also through disaffection. Mrs. Ames, tormented by her husband's ridiculous braggadocio, falls in love with Coy Banton's charms and releases him so that he'll take her away. Predictably, her action doesn't pan out very well for her. Meanwhile, after two of Abel's four sons have died, the last one in the party walks away from the mission and out of the story. Abel Banton comes very close to dealing out Old-Testament justice upon his offspring, but ultimately refrains. Abel ends up dying shortly after being reunited with his favorite, however. The film climaxes with Tarzan having a brutal battle against Coy Banton atop a rocky crag, a fight which is clearly modeled upon the end-fight in ADVENTURE, and almost as well-executed.
Posted by Gene Phillips at 2:53 PM
Email ThisBlogThis!Share to TwitterShare to FacebookShare to Pinterest
Labels: combative adventures, outre outfits (u), superlative skills (u), the uncanny