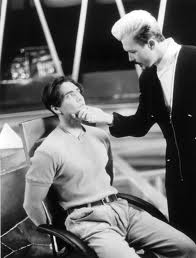 
DOUBLE DRAGON, the 1994 film adaptation of the popular 1980s video game, was a film I liked purely as I would enjoy a wildly-painted roller-coaster ride. Indeed, the film is so much like a real roller coaster that I'd be surprised if there's a solid twenty minutes when two or more characters aren't screaming "Whooaahh" at the screen (which action is almost the very last thing seen in the flick).

DRAGON focuses on two brothers, Jimmy and Billy Lee, who possess one half of a medallion which, unbeknownst to them, possesses fabulous magical powers. The other half is owned by megalomaniac Kogo Shuko (Robert Patrick, sporting hair that looks like silver Brillo), and he wants the full medallion so that he can conquer the futuristic (2007) civilization of New Angeles. He and his bizarrely-garbed gang of crazies come after the Lees and their few allies, including their sensei Julia Nickson and their impish tough-girl buddy Alyssa Milano. Lots of fight-scenes, largely silly in tone in deference to the PG rating, ensue.

There's nothing clever about DOUBLE DRAGON, whose four writers include Paul 'BATMAN' Dini and Michael 'SHOOT-EM-UP' Davis. The flick pretty much borrows its chaotic futureworld from better films like ROBOCOP and THE WANDERERS, and its one sociological underpinning (Patrick as your basic "grab it all" tycoon-villain) is bare of subtext. It's also a film where death really has no dominion. Nickson's character dies offcamera in an early scene, but though she stays dead her spirit shows up, Obi-Wan style, to cheer the heroes on at the climax. Over halfway through the picture, some writer must've thought the Lees needed some extra motivation to hate Shuko beyond his having killed their sensei, so Shuko offhandedly reveals that he killed their father as well. But though it's mentioned once or twice afterward, no one takes the matter very seriously.

Three elements caused me to enjoy this film despite its lame "we know it's all a big joke" atmosphere. First comes the costume designs of one Fiona Spence (no relation to an actress of the same name), which supply lots of pleasing eye-candy. Second, occasionally a few of the scenarios are a little funny, and I find myself wondering which if any flowed from the efforts of Michael Davis, whose SHOOT-EM-UP is replete with dozens of adventure-tropes-turned-into-cartoons. Third, Robert Patrick seems to have loads of fun with his comic-menacing villain, without ever breaking character. Patrick's Shuko is so ironically self-involved that I could imagine Robert Downey Jr. referencing Patrick's performance for the role of IRON MAN's Tony Stark.

I will note that I probably wouldn't have liked it this much had I paid money to see it in a movie theater.
Posted by Gene Phillips at 3:03 PM
Email ThisBlogThis!Share to TwitterShare to FacebookShare to Pinterest
Labels: combative adventures, the marvelous