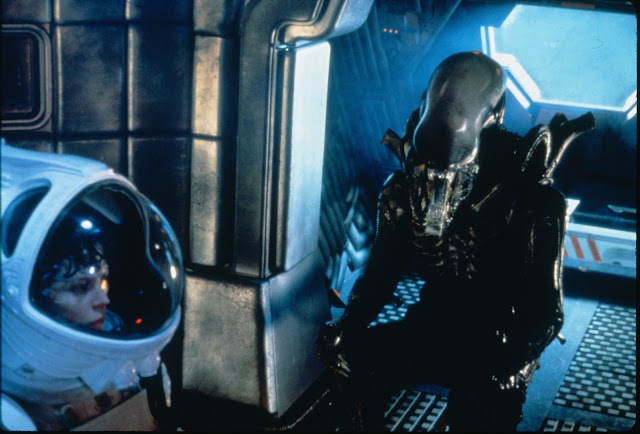 I begin with this comics-filtered reference to the "wire mother experiment"  in order to find a fresh approach to Ridley Scott's SF-horror film from a new angle. ALIEN can be placed alongside a small number of other films I've reviewed here, such as the 1933 KING KONG and the 1960 PSYCHO, in that the basic narratives of each film have become cultural touchstones. Even Americans who have never seen the full films often have a loose understanding of what makes those films appealing, simply because so many people who have seen them have raved about them for generations. With such touchstone-films, I find it pointless to recount the developments of each narrative's plot, as I so often do for lesser known films.

One truism I've seen in many ALIEN reviews is to dwell upon the sexual imagery communicated by the art designs of H.R. Giger; of the multitudinous phallic and vaginal symbols to be found both in the titular E.T. and the bizarre ship of the E.T.'s race. But of course writers Dan O'Bannon and Ronald Shusett crafted the original story without input from Giger, though O'Bannon had been strongly influenced by his having seen other Giger works during his abortive DUNE collaboration with Alejandro Jodorowsky. That said, O'Bannon and Shusett borrowed from multiple sources in crafting their "Jaws in space" script, and from one angle there's a lot more psychological content in the way humans are portrayed within the context of the space-freighter Nostromo.

The film begins with a beatific image of birth, as the Nostromo's crew are awakened, albeit in untimely fashion, from cryosleep by the ship's computer "Mother." However, as soon as all the crew-members are awakened, they have to transition from the peaceful bliss of "Cloth Mother" to the realities of "Wire Mother"-- which is, in essence, every other part of the Nostromo. The film follows the seven characters as they make their way through a ship where everything is, of necessity, made of harsh, unforgiving metal. The seven argue about Mother's having waked them prior to their return to Earth with the ore in their freighter. Having worked hard to bring back goods to Earth for a basic pecuniary exchange, they don't like being called upon to respond to a mysterious distress signal. However, the ship's captain Dallas and the science officer Ash agree that the Nostromo's owners require that any such craft must investigate any such signal-- and that failure to abide by these strictures can cost the workers their payoff.

Thus, even before the Nostromo even ventures near the stranded Alien ship, the crewpeople are living within a mechanical womb where they, like unruly children, must accept all parental requirements. The ship, being in deep space, is far more inescapable than any Earth-bound vessel, and everything the workers do portrays them not as free agents trading their labor for pay, but as pawns to be manipulated by the unseen forces who own both them and the womb-ship in which they exist.

I'll skip over the well-known events in which a small expedition investigates the extraterrestrial vessel, with the result that Officer Kane is attacked and immobilized by a "face-hugger." Significantly, when Kane's comrades take him back to the Nostromo, Officer Ellen Ripley (Sigourney Weaver) attempts to prevent the infected crewman from being allowed aboard due to quarantine restrictions-- which, incidentally, is the first sign in the film that Ripley is going to be a character of special consequence. Ash overrides Ripley's decision, and the infected Kane is brought into the womb, whose inert but benign structure will be transformed into a site of horror.

After numerous asides upon the bizarre biology of the face-hugger, the creature seems to perish-- but leaves behind its own progeny, "born" from the body of Kane in a show-stopping display of gore. I would assume O'Bannon and Shusett were thinking of the ways in which certain insects lay their eggs in other animals so that the junior spawn can feed off the bodies of their biological victims. The infant Alien, however, needs no gradual period of feeding: as soon as it bursts forth, it scampers into the corners of the ship and rapidly assumes its fearsome adult form, with no reference to any need to take on bulk through feeding. The Alien may indeed eat the crewmen it kills, but there doesn't seem to be any indication that the creature MUST eat. It seems less like an animal than an incarnation of all the fears of the hostile womb in which the crew-people seek to exist.

Amid this physical menace, Ripley soon discovers that she and every other human have been set up to be fodder for the Alien by the Nostromo's masters. Science Officer Ash was acting under orders from the Company when he admitted Kane, and the broad implication is that the Company wants to bring the Alien into their aegis for military purposes. Ash is proven to be a robot-- a detail not in the original O'Bannon-Shusett script-- meaning that he like the Alien is totally at home in this artificial womb. Eventually Ripley and the others are able to destroy Ash, though not before he makes the odd statement that he considers the Alien "pure."

How is the Alien "pure?" Only, it would seem, in its utter independence from the softening needs of "Cloth Mommy." The Alien, though not technically an insect, captures the human repulsion for beings that run around with their skeletons on the outside. Does Ash have an independent admiration for the Alien, or has that idea been programmed into him because his mysterious masters, the advocates of some ruthless futuristic military-industrial complex? The sequel addresses some of those matters, but in ALIEN, the viewer finds himself as isolated from sweet reason as the crew-people, most of whom perish.

Ripley finds one way to rage against Wire Mommy, programming Mother to destroy the ship and its hostile progeny. Yet the Alien almost hitches a ride in Ripley's escape craft, only to be rejected when Ripley manages, so to speak, to "cut the cord," after which the creature of vaginal darkness is destroyed by cleansing fire. The film ends with a re-elaboration of the birth imagery, though this time Ripley enters cryosleep with her own "child:" the ship's cat, the only other entity rescued from the annihilation of Wire Mommy and all of her creations. It's a temporary triumph for the human sentiments of love and affection validated by Cloth Mommy. But it's the creation of Wire Mommy who's the star of this show and all of the sequels, and the Aliens continue to take on life long after Ellen Ripley departs their hostile territory.

Posted by Gene Phillips at 1:52 PM
Email ThisBlogThis!Share to TwitterShare to FacebookShare to Pinterest
Labels: the marvelous