WOMEN OF THE PREHISTORIC PLANET (1966) 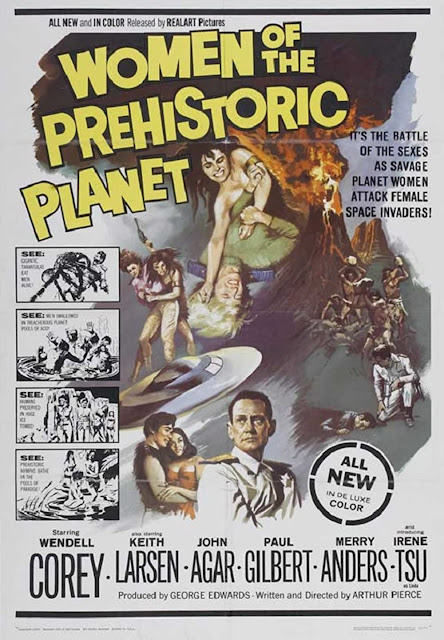 It's weird that this bland venture into "serious science fiction" debuted on American screens in April 1966, just a few months before STAR TREK began to be beamed into TV sets. Though Gene Roddenberry never quite descended to the level of this film's "big reveal"-- that the couple left on prehistoric "Earth" will be a veritable Adam and Eve-- he came close at times. Yet for the most part, Roddenberry treated the tropes of SF with intellectual acumen, while Charles G. Pierce couldn't do anything but copy better works.

FWIW, Pierce seems to have remained relatively loyal to the genre. But this could have been because it was easier to rip off popular SF-tropes without being called on it. Pierce's first feature-film script was for THE COSMIC MAN, which I called a "colorless recapitulation" of 1951's THE DAY THE EARTH STOOD STILL. He did a little better with BEYOND THE TIME BARRIER, using only limited borrowings from Wells' TIME MACHINE. However, WOMEN OF THE PREHISTORIC PLANET, one of the first films Pierce both wrote and directed, proved a little too ambitious for his talents. I would guess that Pierce's proximate inspirations for WOMEN were some of the half-hour TWILIGHT ZONE SF-outings, which tended to place futuristic spacemen, often for the purpose of making highly didactic statements about such 20th-century concerns as race.

Roddenberry would become renowned for finding ways to project such contemporary concerns into SF-guise, drawing on sociological myths of his time, with Russians becoming Romulans and Chinese turning into Klingons. But in the opening thirty minutes, Pierce's clumsy script sketches out a burgeoning conflict between an all-Caucasian space-force-- which one may assume to be from a future-Earth until the big reveal-- and a race of humanoids, the Centaurians, who are all played by Asian actors. Early dialogue makes it sound as if the two races are not from the same stock, though later a major Caucasian character is revealed to have sired a half-Centaurian female. Of course TREK didn't pay that much attention to interstellar genetic probabilities either-- but given that Pierce knew that the two peoples were interfertile, he could easily have posited that the two races had diverged due to separate colonization projects.

As things stand, the status of Centaurians amid the uniformed spacefarers is confusing. On one of two ships, a character serving in some capacity, Linda (Irene Tsu), has been acculturated in the spacefaring culture, and apparently Centaurians have been on Earth long enough that a few dunderheads make ethnic jokes about them. Yet on the companion ship, the spacefarers have rescued a small handful of Centaurians from a cataclysm on their home planet. For some reason the rescued people don't like being rescued. They try to take over the ship, which ends up crashing on a prehistoric planet which happens to be third in line from its solar body. The other ship attempts to help the downed ship. But because of time-discontinuities-- which Pierce's characters labor to explain-- a new generation springs up on the planet from the refugees before the officers of the rescue ship can land on the planet and look for the castaways. Thus Linda, from the first ship, encounters on the prehistoric planet a young man named Tang (Robert Ito) who's actually the grown offspring of two adults from the shipwreck.

You would think that with all these SF-tropes buzzing around, WOMEN would be much more fun than it is. Yet Pierce doesn't really manage to dramatize any of his concepts; he just jams them in as best he can and then cuts to having the characters menaced by various unremarkable prehistoric critters.

I suppose I have to give the movie a mythicity rating of "fair" just for being a little more ambitious than the average SF-flick of the period, and for advancing the idea that the "Adam and Eve" of Earth are really two quasi-Asian characters. But not only is the title deceptive, since Linda is effectively the only woman who has any important role on the planet, the social content is ham-handed and the performances are unmemorable.

Posted by Gene Phillips at 3:25 PM
Email ThisBlogThis!Share to TwitterShare to FacebookShare to Pinterest
Labels: the marvelous