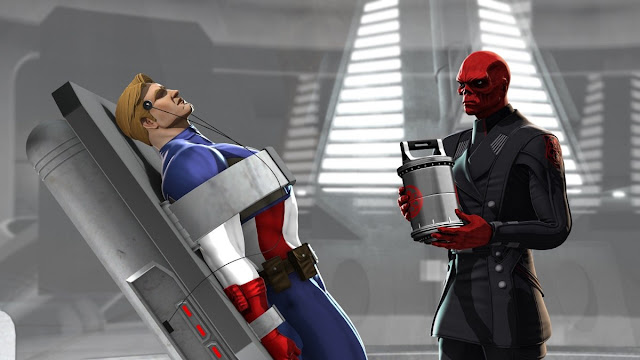 See, now THIS is the middling level of quality I expect from Marvel Animation product. IRON MAN AND HULK, the only other iteration to use the "Heroes United" rubric, was a pleasant surprise, getting some good mileage out of the familiar "heroes must work out their differences to defeat menace" trope. But possibly this worked because, even in the original comics, there hadn't been all that many character-encounters between the Armored Avenger and the Green Goliath. Possibly the writers were challenged somewhat by the breaking of new ground.

In contrast, there's not all that much one can do with the same plot when you combine Iron Man and Captain America, who in the comics have a history of strong alliance, even if neither of them have exactly been best buds at any time. Despite the script's attempts to make Cap a rule-follower and Iron Man a fly-by-the-seat pantser, the characters as portrayed don't really have any substantial differences. The live-action AVENGERS films of the MCU grafted a sort of automatic competitiveness between the two, and UNITED II is clearly riffing on that, though not with the same ideological rigidity seen in the MCU. Here the two heroes are at least seen to like and respect each other despite the competition, but not anything more interesting than that. Given that the two characters have rather disparate backgrounds, someone could have come up with a good "work out their differences" script. But this is not it. In fact, the producers even shoehorn the Hulk into the story in the last twenty minutes, which might be an appeal to those who find the two main heroes a bit too vanilla.

The villains raise other concerns. Whereas I complained that UNITED I dumped a few too many villains into the mix and muddied the story, here the viewer just gets two-- the Red Skull and his subordinate, the Taskmaster-- not to mention a small army of Skull-flunkies, that is. Given that the villains' plot is so rudimentary-- the Skull plans to use Captain America's blood to breed a new wave of Nazi soldier-soldiers-- the story might have benefited from the mastermind having a whole contingent of costumed servitors, more or less on the model of the "Skeleton Crew" stories of the nineties CAPTAIN AMERICA comic. Instead, the Skull gives orders, the Taskmaster fights the heroes while plotting to overthrow his boss, and the Skull outmaneuvers his minion. Big deal.

The Skull himself is a problematic villain. In the comics he's rarely been used well when not authored by Lee and Kirby, the two men who revived him from the dust of his Golden Age incarnation (wherein Kirby had illustrated the character though it's my understanding he did not technically create the crimson headed fiend). Possibly because the DVD is aimed at kids, there's almost nothing said about this Skull's politics, so he might as well be a standard non-political world-conqueror. Even the idea of his hijacking the super-soldier serum doesn't conjure with the Nazi fantasies of "the ubermensch."

UNITED II is a very safe, very boring DTV, with just a handful of decent animated battles to redeem it.